Wow.... what a game. What a season. The Patriots completed the largest comeback in NFL History last night, defeating the Atlanta Falcons 34-28 in the first Super Bowl to ever go to OT. Down 28-3 in the middle of the 3rd quarter, the Patriots somehow held the Falcons off the board for the rest of the game. The offense woke up, the later it got the better Tom Brady and his teammates performed.

Here are the best/ most critical plays from Super Bowl 51: 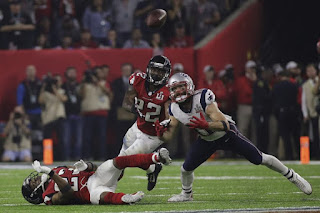 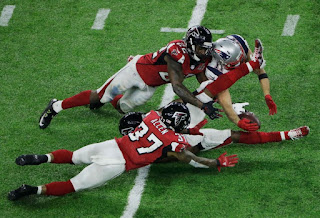 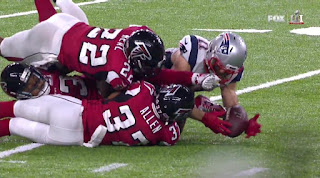 1. The Catch.
The Immaculate Gritception. Julian Edelman exonerated Pats fans like myself from years of nightmares after David Tyree's helmet catch and Mario Manningham's circus grab. Incredible catches that were completed beyond all odds.  Edelman's catch last night was correctly called on the field, and stupidly challenged by Atlanta. Not only was he able to come back to the back, but had the concentration to scoop it off a Falcons leg, while using his body to block out the defender from intercepting. He then had to re grip the ball, and with the smallest of margins he was able to do so without letting the ball touch the ground. Unreal.

It is somewhat of a shame that Edelmans catch will forever keep this incredible grab by Julio Jones in the shadows.... Julio was probably the best Falcon on the field last night. He was great, made multiple amazing catches- led by this one: 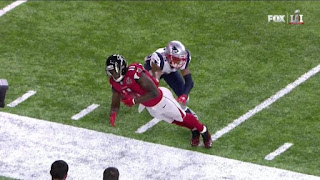 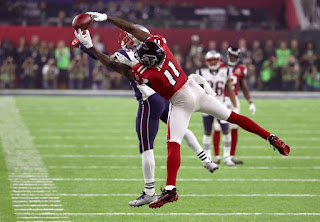 2. The Sack Fumble
Dont'a Hightower with what Belichick called the play of the game. At that point, it was 28-10 Falcons with 8:31 left in the 4th quarter. It gave the Patriots the break they desperately needed, a short field and chance for a quick score. This is the second Super Bowl saving play Hightower has made, he was the one who stuffed Marshawn Lynch on the 1 the play before the Butler Interception. 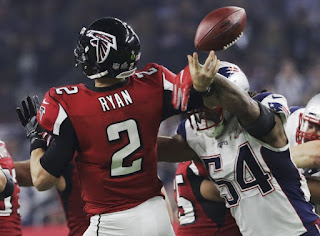 I'm not quite sure anyone realizes yet just how important both 2 point conversions in the 4th were. Both were absolutely critical if we wanted to come back. After the TD's the team did a great job of hustling to the play and giving Pats Nation minimal time to dwell of the magnitude of the following attempts. Don't forget: It was a failed 2 point attempt last year in Denver in the AFCCG that led to the end of season loss. 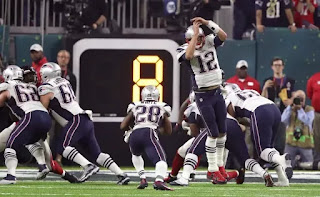 The first conversion was an unconventional play.... direct snap to James White who scurried easily in between his blockers to the paint. Brady sold it well, but in reality the play call was what worked here. Just so happens this was basically the exact same play as Kevin Faulk’s two-point conversion in the 2004 Super Bowl vs the Panthers. Chilling. 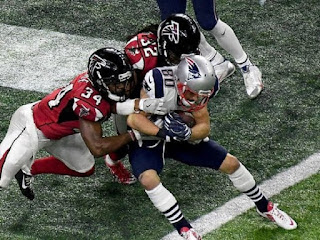 The second 2 point conversion was also relatively easy... Amendola came in motion to Brady and with a quick snap, they ran a mini WR screen that worked to perfection. The play was also offside, so in essence it was a free play. The most important 2 point conversion attempt in franchise history and they nailed it.

4. Backing up the Atlanta Offense 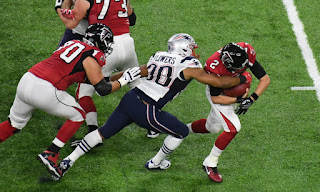 There were multiple critical drives in the second half where the Patriots pushed the Falcons out of scoring range. The first was at the end of the 3rd quarter 2:06 left, after the Patriots failed attempt at an onside kick. The Falcons took over, up 28-12 at the Patriots 41 yard line. Basically a first down away from FG range. Well, on first down Austin Hooper made a 9 yard grab. Down to the NE 32 yard line. Then the next play, the Falcons were called for a hold. Then Ryan was sacked on 3rd down, getting dropped at mid field and being forced to punt. This all happened before the 4th quarter started.... if only the Falcons weren't stupid and simply just ran the ball to take down the clock, and convert the one first down they needed to add a FG and put the game out of reach.

Then in the 4th, the Falcons got the ball on their own 10 yard line. Up 28-20, they needed a drive to kill time and a FG to seal it. There was 5:56 left in the game. First play: Devonta Freeman 39 yard catch, a near back breaker for Pats fans. But it was still ok, as long as we kept them off the board. Two plays later was the 27 yard fire flames catch by Julio I pictured earlier. That play took the Falcons all the way to the 22 yard line of the Pats. For sure we were screwed. But no, the Falcons are who we thought they were. Matt Ryan took a 12 yard sack, and the next play the Falcons were called for holding and forced to punt from the 45 yard line. Just an unreal sequence of events that saved the Pats. 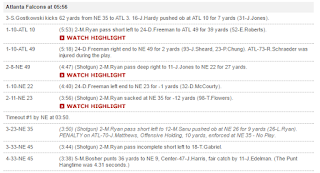 Overtime
Was there ever any doubt? Once the Patriots won the coin toss.... I think everyone knew what was coming. Brady and the offense were ROLLING, and the Patriots had every ounce of momentum in the stadium. Brady went 5/6 on the drive, leading the team on a 8 play, 75 yard TD drive in just under 4 minutes. The Falcons players were dropping like flies throughout the second half, and they looked tired AF in that OT. We killed the Falcons. 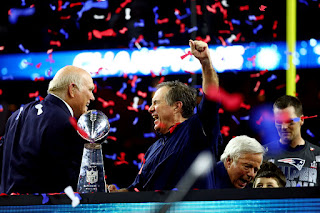 Below are my favorite stats from the game:

14- Catches by James White, a Super Bowl record. Once again we see RBs highly involved with no Gronk in the Super Bowl.

20- Points James White scored in the game. Unreal effort by White. 3 TDs and a 2 point conversion. Brady is giving him the MVP truck, and James White is going to Disney World. The Belichick RB usage train keeps on rolling. For those who think White deserved the MVP... I would strongly disagree. While he was critical, the pick has to be Brady. Has to be.

466- Yards Passing for Brady. SB record. Tied for 2nd most in any playoff game ever. His record as a QB with over 50+ attempts in a post season grows to 5-1 while everyone else is 3-29. Unreal.

0- The amount of time the Patriots led this game. They ended up winning by 6 points, their largest margin of victory in any Super Bowl

12-1 The record of teams who have a pick 6 in the Super Bowl. In maybe the darkest moment of the day, Robert Alford intercepted a sloppy Brady pass in the Red Zone in the second quarter, and returned it untouched to put the Falcons up 21-0. The Falcons are now the only team to have a pick 6 and lose the game in SB history, all 12 of the other teams were able to win the game. Take your time walking into the end zone though, Alford. You're now a part of history.

5- Belichick said today that winning the Super Bowl was great, but the team is now 5 weeks behind on the 2017 season. That's why he's the best ever.

All the records set in the Super Bowl by the Pats:

SUPER BOWL RECORDS SET
( I took out the stupid ones like, "most points in OT in Super Bowl history", since of course this was the first game to get to OT)

Most First Downs Passing By A Team – 26 (Patriots)

Most Offensive Plays By A Team – 93 (Patriots)

Most Completions By A Team – 43 (Patriots)

Most Games By A Head Coach – 7, Bill Belichick

Most Games Won By A Head Coach – 5, Bill Belichick 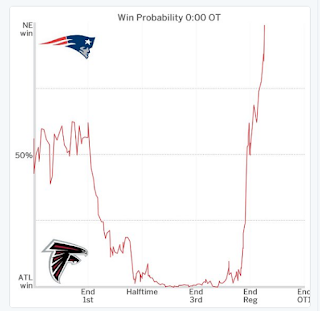 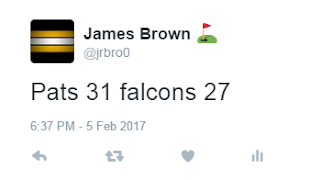 -Deflategate is now officially over. Goddell had to hand Brady the MVP and Lombardi trophy, we overcame the 4 game suspension and penalties, all for something that never actually happened.


Also Shout out to the following games from this season:

I'll never forget this game. The 3rd of the season, with Brady suspended. The Pats were 2-0 with Jimmy G, but he was unable to play in week 3 due to injury. Jacoby freaking Brissett is starting for the Patriots. The game is a "pick em" in Vegas. Everyone in New England knew it was an absolute joke. We had already killed the Texans franchise in previous years. They came back for more and got white washed. Shutout on national TV. GG.

Wanted to be sure to get a Jets reference in this blog. It's a Super Bowl blog, so I know the Jets don't belong, but I can't pass up an opportunity to simply recognize the Jets went 5-11 and the Pats went 17-2 this year. Ho hum.

I have to mentioned the AFCCG. The Patriots destroyed the Steelers because they are a shitty franchise with a cheerleader coach. The game was never close. The Pats defense essentially held Big Ben to 10 points. Brady threw for 384 yards and 3 TDs. Typical Steelers. Losers. 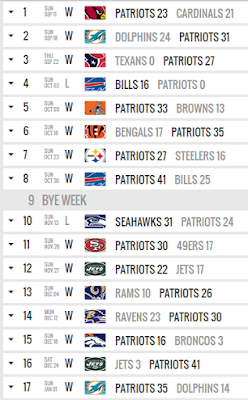