Dead Dogg “Unleashed” – Don’t Call it a Comeback (even though it was)
By: Andy Haase #20

The Doggs trotted into Game 10 of the D1 playoff bracket without a loss thus far giving them 2 cracks at division rival Coops in order to capture their second straight Winter Title.  Unlike Cinderella, they did not choke when they got to this ball and captured a 4-3 overtime win in what Michael Jackson would consider a “Thriller” in front of a not quite capacity crowd of 18.


Confidence was not lacking from the Dogg locker room, all while realizing a tall task was in order to end the season that night as they faced a good skating team and an excellent goaltender.  The teams went scoreless well into a tentative first period by both teams until Coops broke through late in the first.  The Doggs tied it quickly as Marc Saulnier connected on a pass to James Brown found John Kotkowski who got open at the side of the net and buried it into an open right side for his second goal of the playoffs.  Marc’s addition to this line was a great adjustment (see what I did there?).  A late defensive breakdown in the first cost the Doggs and they went into the second down 2-1 not having played their best period.


The second period was a continuation of the first as the Doggs squandered a power play early in the second and found themselves on their heels for a while until Coops struck again taking a 3-1 lead.  Teams traded power plays with no scoring all while Adam Beckvold blocking a shot and in Dikembe Mutumbo fashion waving “no-no” with his index finger.  OK, that didn’t actually happen, but it makes for a good story.  The Doggs picked up the intensity from there but could not break through during the rest of the period after strong urging from the fans in the Dogg House.


Heading into the third trailing 3-1, the Doggs maintained their intensity and after a shot by Eric Stevens, fresh off a suspension for being the third man into a wrestling match that involved two people, Shawn Civitarese battled for a rebound and knocked it home to cut the Coops lead to 3-2.  Civ played with that fire the entire game which really gave the Doggs a boost.  Mind you, that it’s the only time you should actually play with fire.  A short time later, it was déjà vu as Brian Abrahamson, fighting a sore shoulder through the playoffs, got the puck to James Brown who again found John Kotkowski open at the right side of the net who put it home to tie the game at 3 with about 10 minutes left in regulation for his second of the game and third of the playoffs.  After that, it was on like Donkey Kong, although no barrels were jumped in this game.  All while Dan Cosgrove posed as Donald Trump’s new wall, the Doggs had many great chances to grab the lead by John Kotkowski, Derick Slonina, James Brown, Paul Taylor, Evan Lum, Ian Stevens, Marc Saulnier and Andy Haase, but the Coops netminder had other ideas as he threw his glove, stick, toes, his truck, his house, and anything else he could get in the way to try and keep the game tied.  Neither team could solve the two goaltenders who refused to give in and the buzzer sounded forcing sudden death overtime. 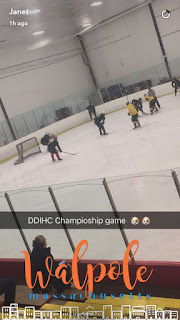 The Doggs tightened their collars and went into the overtime with a bit of an edge having three forward lines and Coops showing a little bit of fatigue only having two.  However, up and down the ice two teams went trading chances and kept a good pace while the two goaltenders made plenty of quality saves to keep this game going.  It appeared the Doggs threw everything but the kitchen sink at the Coops netminder, but had they thrown the kitchen sink, he looked poised to stop that.  Also, that would probably be illegal according to the rule book.  Read your manuals, people!  Finally, with about 3 minutes to go, which is still enough time to cook up a batch of Minute Rice, James Brown pounced on a loose puck and with his third assist of the game found an open Derick Slonina who one timed the pass for the game winner, and Title winner for the Doggs.

This was an excellent team win for the Doggs as everyone appeared to have a hand in this victory.  Dan Cosgrove locked in and shut-out the Coops for the second half of the game and the OT.  Not to be outdone as Ian Stevens gutted out his performance with a pre-game shit-out while battling an illness.  Also, a shout out (Lot of outs here.  Must be a good poker hand.) to Dana Taylor for joining Jay Bouchard as the only two Dogg members in history to coach the team to a championship. The Doggs move to 7-0 all time in the Winter Playoffs and 2/2 in Winter Season championships. Is that good?