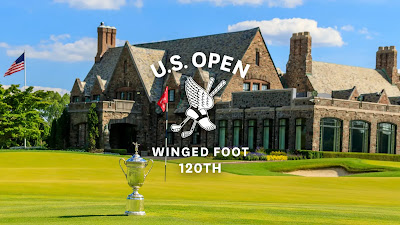 Due to Covid, we unfortunately lost a bunch of guys from the trip this year (myself included.) Here is the final roster breakdown. A couple guys had to be moved to make the teams equal in numbers. 20 guys total, a 10 v 10 matchup. 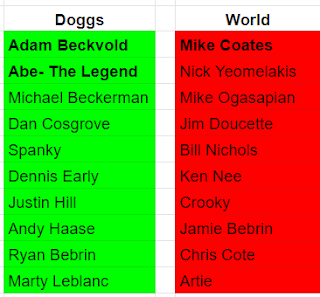 Finalized tee times will be posted in the near future.

Looking back at Gronk vs AJ Green in 2017

It's time to memorialize the truth in the matters that occurred on September 6th 2017, the morning after our fantasy football draft and just days before the start of week 1.

The accused crime: Taking advantage of my marital relationship with my wife, and forcing her to make a trade against her will.

Kait, who at the time had never won our fantasy league, drafted this squad on the night of the 5th: 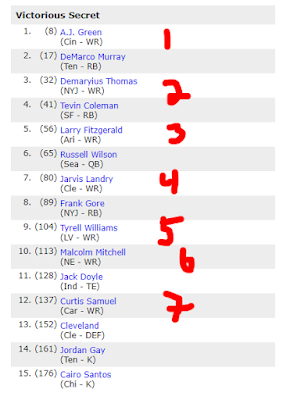 They key takeaway here is she walked away from the draft with 7 Wide Receivers (And 2 kickers?) We play in a league with 2 WR spots and 1 flex. After the draft I asked her why she drafted so many and I believe she said she didn't actually mean to, but WRs were consistently at the top of the ranks when it came her turn to draft.
So what did I do? As a loving husband and competitive fantasy player- I offered a mutually beneficial trade.
It was Rob Gronkowski for AJ green and Jack Doyle. It was accepted by Kait (At work, I believe) the next morning.

The league revolted. Well, maybe not the league, but one very vocal very angry owner called for collusion and said there's no way Kait should make this trade, after all, Gronk was available at the spot she took AJ Green!
Well, it turns out this was actually a league winning trade for Kait, literally. As in she won the league. But... was it despite this trade? or because of this trade? Lets see...

Gronk was the #2 TE (#1 TE in fantasy points per game) in 2017. AJ Green, no slouch himself, finished at the #10 WR.  Considering WR  are far easier to replace than TEs, this alone would be a win for Kait.
Here's the kicker- how did these guys play in the most important fantasy weeks of the season?
AJ Green:

Gronk lit the world on fire. 25 points in the semis and 31 in the finals? GG. And AJ green sucked. Kait won the league.
Case: Closed
Note: She still hasn't thanked me for this and it's been 3 years.
Posted by JB at 1:40 PM No comments: