The 2019 season, our 11th, is in the books. Dedham's adopted son (me) has finally won back the D.  I was able to close out strong with a dominating win over Abe, who had his best season in this league by far. The Boston Patriots- drafted by the late Mr B- made a magical run to the #1 seed, but unfortunately fell just short and came in 3rd place. Mr B. finishes 2nd and 3rd in his last 2 seasons of the league. He ends his fantasy career on a four year playoff appearance run. Very sad to see an original owner leave, Mr B. will be missed by all. Next year we will be changing to fractional scoring, which is all the guy ever wanted in our league. He would be proud. We will have at least 1 new owner in 2020. 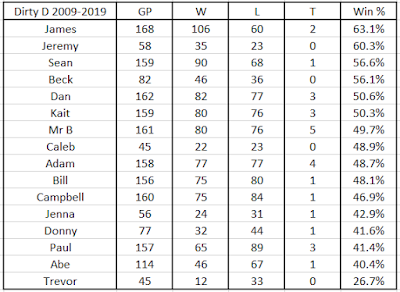 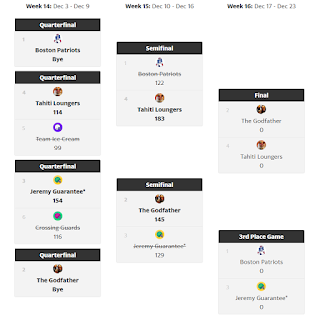 The 11th season of our fantasy league has come down to 2 teams.... my own squad (Tahiti Loungers) vs Abe's squad (The Godfather). Here are the main story lines and my prediction for the matchup

Mahomes has had a "down" year for sure, but had a nice showing last week in the snow. It's impossible to ever count this guy out. The offense is wildly explosive downfield, and he can make every throw. He also provides a solid rushing floor. This week, Mahomes is playing on SNF in Chicago. The Bears D has declined significantly from a year ago, but are still competent enough to prevent a Mahomes from doing whatever he wants. That being said, I think speed is the way you can beat the Chicago secondary and Mahomes has the arm and the confidence to throw bombs downfield.  I'm expecting something like 310 yards passing, 2 TDs, 30 rushing yards. That's 25 points.

Dak has certainly had a break out season, leading the leagues #1 passing offense by yardage. This week, the cowboys are in a must win game in Philly... the Eagles are generally stout against the run and leaky in the secondary. Dak could have a huge game. The one concern here is that he is dealing with a shoulder injury. The team says he is fine, but being limited in practice all week is a clear sign he isn't fully healthy. That's my only real hope... that he isn't fully healthy and the Cowboys lean on the run game. Zeke has always dominated the Eagles. My guess is Dak ends up with 280 yards, 2 TDs, and an additional 25 rushing yards, for 21 fantasy points.

The Mahomes/Hill connection is likely going to make or break my season. As mentioned above, I think Tyreek has the speed to beat the Chicago DBs, who have been vulnerable to speedy receivers downfield this year. I expect Tyreek to have a big game, I'll predict a 5/120/1 line. 25 fantasy points

AJ Brown is a MAN. Watching him play- no lie- reminds me of Calvin Johnson. Just a huge dude with speed and no fear. Since Tannehill took over, AJB has been a stud. This is an interesting spot as the Saints give up a lot of production to WRs, but of course have Marshon Lattimore who may or may not follow Brown around. I am hoping he doesn't, but even if he does I like Brown to produce. I'm predicting a 5/90 line but will stop short of predicting a TD. 14 fantasy points

Tyler Lockett
Interesting Abe doesn't like Mike Evans but likes Tyler Lockett. Lockett had 20+ points last week, but the previous 4 weeks he had 8-0-4-5 in backwards order. And no he didn't get hurt or miss the game with the 0. He's obv a guy who can explode, and really seems to be gameplan dependent. Who knows where Patrick Peterson will play this game, he may follow Lockett, he may follow Metcalf. Either way I am certainly nervous about facing Lockett, knowing his blow up potential. I'll predict Lockett has a good game, something like 4/80/1 for 18 fantasy points

DK Metcalf
As mentioned above, Patrick Peterson is going to affect one of these 2 WRs. Metcalf is a physical freak, but lacks the ability to run great routes. I think that is defensible. I am also hoping the Seahawks blow out the Cardinals and they don't need to throw too much. I am sure they will still take shots with Metclaf, but I don't think he gets in the end zone this week. 6/75 for 13 fantasy points.

Saquan finally had a game last week, looking fully healthy and confident. Thank God. It gives me much more confidence in Barkely this week, knowing he is facing the R words, who yielded monster performances (30+ points) recently to Miles Sanders (who backed up Saquan at Penn State) and Aaron Jones. Seems like Daniel Jones will be back which isn't ideal for Saquan, but I am still expecting a huge game. 110 rush yards, 2 Tds, 4 catches, 30 rec yards for 30 points.

CMC is a monster, obviously. He hasn't topped 100 yards rushing in 5 weeks, but has a million catches this year that more than makes up for the lack of rushing production. And he still gets looks at the goal line. I am nervous as hell about playing CMC this week, esp in this full PPR league. I expect 80 rush yards, 8 catches, 90 rec yards and at least 1 TD. 31 fantasy points

Marlon Mack returned last week from a hand injury and looks good to take advantage of this amazing matchup vs the leagues worst run defense. He probably won't catch the ball but the Colts are likely to be ahead, and will pound Mack. I expect something like 120 rush yards and 1 TD at a minimum. 18 fantasy points.

My second RB is TBD. I may play Mike Boone or Deandre Washignton or Kareem Hunt. Hoping that Dalvin Cook and Alexander Mattison are both ruled out so Boone is the obvious play. But, I suspect we wont get news until to too late and I'll have to play Washington or Hunt. Probably Washington though its tbd. I;ll predict a modest 70 rush yards, 2 catches 25 rec yards and 1 TD for Washington. 17 fantasy points

Darren Waller had a lull in the middle of the season but recently has caught fire again. I am hoping it wasn't directly tied to Hunter Renfrow being out- since Renfrow is back this week- but that may be the case. Regardless, Waller should eat, but I doubt he blows up. 6/80 for 14 points

Kittle is a different story. He's coming of a career high game in catches. The Ram's aren't great at defending Tight Ends, and Kittle has a solid history vs the Rams. Kittle does have a hard time finding the endzone in this run first offense, but has the big play ability to bust a long one. I'll predict a 6/90/1 line for the beast. 21 points.

Abe is going to play Perriman or Chark. Chark was out last week injured but may return. Perriman stepped up in a big way with Mike Evans out last week, and now Godwin is out too. Perriman should be walking into 10 targets no problem and although he has been brutally bad in the past with drops, his most recent form has been solid. Of course, he could fall flat on his face, because he is Breshad Perriman. Perriman I will predict a 6/80/1 line and Chark, if he plays, I will predict a 8/90 line. So 20 for Perriman and 19 for  Chark.

My flex is going to be Terry McLaurin or Anthony Miller. I haven't decided yet. McLaurin has proved to be a stud, and has gained the NFL chemistry with his college QB Haskins. That being said, he needs to break a long one to go off... Haskins isn't throwing the ball deep. Miller has had an amazing resurgence toward the end of this year, being Trubisky's go to target in the slot. No sure which way I'll go but will predict the same... 15 fantasy point from whoever I play.

Patriots and Butker - The Pats have been AMAZING this year (in the matchups they should be played) and Butker has also been a stud. Ill be disappointed with anything less than 20 from these guys.

Seattle and Gould- The Seahawks will feast at home vs Kyler Murray, I can only pray Jadeveon Clowney remains out of this matchup. Gould is back from injury and on a great offense so I'll simply predict the same 20 combined points for Abes guys here.

So there ya have it clown boys. I guess I have predicted a 162-160 win for The Godfather. Should be a really good, high scoring matchup. May the best squad win.