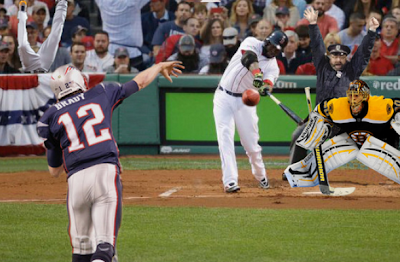 For my job, I'm lucky enough to have access to tickets so I can entertain clients and host potential partners at Bruins, Pats, and Celtics games. Last week I was able to get grab a pair of tickets to take someone to the Bruins-Penguins game, so I was pretty excited to go to my first Bruins game of the year... against one of our rivals (ish.) (Penguins)

But then something happened. Ms. N.W.O.T.B. was scheduled to babysit on Sunday night, for a couple who were planning on going to the most anticipated Pats game of the year... the Broncos/Wes Welker game on Sunday Night Football.

The couple calls her and says "We don't need you to babysit on Sunday anymore- we aren't going to the game. Actually, do you and your boyfriend James want to use our tickets and go to the game?" 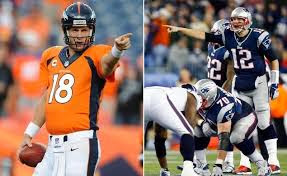 Needless to say when I heard of this I thought it was a joke.... after a few moments reality sunk in and I realized this most definitely was real and we were going to see a Brady vs Manning showdown in person!

That was around 8:00pm on Friday night. About 90 minutes later I receive a text from my friend and captain of my Adult hockey team:

And just like that, I had an epic Boston Sports Bender on tap Saturday through Monday.


And here's the recap: 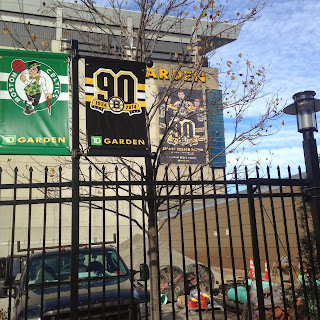 Anyone who knows me pretty well knows I really hate the 1pm Bruins games on Saturdays. They just throw my whole day and sometimes entire weekend off. When I attend these games in person, something just seems right about day drinking and Bruins afternoon hockey. So around 11am I headed over to my favorite pre-game place:  Halftime Pizza 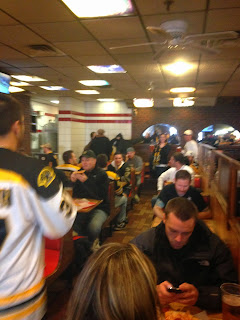 They sell 32oz beers for like $8 and there's nothing better to fill your stomach up with than a greasy slice of pie.

But most of all I love Halfitme Pizza because of the crowd. So many Bruins fans, they are always playing old time hockey fights and brawls on the TVs, people just crowd together and share tables, and the beer flows aplenty.

After a couple brews, Matt and I headed into the game. Matt is a season ticket holder and his seats are in one of the best places to watch a game in the Garden.... THE LAST ROW.

Here's the view during the national anthem: 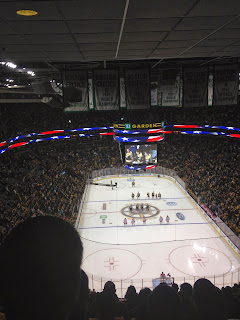 During the game we had a couple more beers, the game itself was a good one. The Bruins carried the play most of the game, but regulation ended with the score 2-2.

For Overtime, I'd be lying if I said I clearly remember seeing that Claude decided to go with 3 forwards and 1 Defense-man... but that's what he did. And sure enough, just a minute and a half into OT, David Krejci picked up the puck in the slot, showed his worldly patience that still mesmerizes every-time, and put the game winner in for a 3-2 victory.

So the game ended around 3:30 or so, of course at 3:30 on a Saturday afternoon there's really nothing better to do than keep drinking and celebrating the recent OT win. Matt and I met up with my sister Jenna and her friend Jacqui. And #PlayoffMike.

We drank at Boston Beer Works. Upstairs. Not sure how long. Pretty foggy.  Here's a pic: 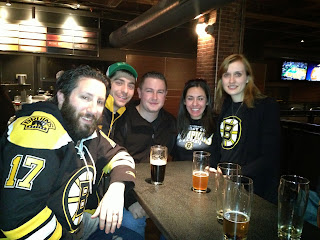 And then to top off this quintessential Bruins 1pm home game experience, on my walk home I stopped at Reginas Pizza in the North end for a couple slices. 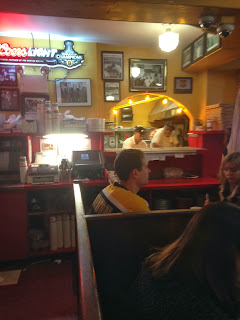 I went home, took a nap, woke up and watched college hockey. Then I saw Boise state lose on TV IN OT, lame)  and went to bed.

My typical Sunday during football season consists of watching TV from 1230pm straight until bedtime. Pretty crazy that the NFL product can keep people entertained for that long, but it does.


This week I headed to Abe's house for #FantasyChef and Red Zone experience.

We ate BBQ Chicken Mac and Cheese and watched the 1pm games. Now, its important to note the weather.

The weather on this past Sunday was brutally cold. Easily the coldest day of the season  this year... I'm talking like 15 degrees with tough winds bringing the wind chill into the lower single digits. To say I dressed warm for the Pats game would be an understatement... I made sure I had layers on top of layer on top of layers. One thing was for sure... I was NOT leaving this game early, no matter how cold or how late it was. 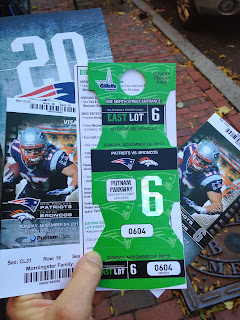 Amazingly, the Patriots tickets we were given were club seats and included a parking pass.

For those who aren't familiar, the parking pass is like pure gold. Parking is awful around Gillette Stadium... The parking pass that allows back entry access is priceless. and we had it. Not to mention we had club seats which meant access to the indoor lounge area.

Here's our view from these amazing seats. 50 yard line. Unbelievable. 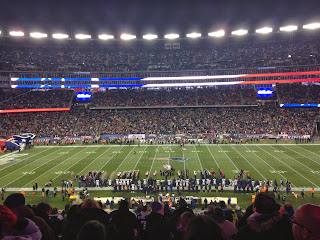 Anyway, like everyone knows, the Pats came out crazy flat and were down 24-0 by halftime. Let me say that watching that first half in person was one of the most deflating things Ive ever witnessed. So much hype surrounding this game... and the Pats fumbled away any chance of possibly making it interesting.

At halftime, a bunch of people left. The crowd around us sucked. Mostly all older, rich people who clearly don't have much interest in the game itself. I believe these people are called Pink Hats. Yes, the pink hats all left at halftime.

Then, in the 3rd quarter, magic happened. The Patriots drove down the field and scored. They caused turnovers. They kept scoring INTO the wind. All of the sudden, comeback complete and we had the lead in the 4th Quarter.

As the time winded down in the 4th... the score was tied and OT was apparently going to be needed to decide this wild game. The Patriots won the toss, and Belichick decided to give Peyton Manning the ball, choosing to make him throw it into the wind. Of course, at the time, I thought this was foolish. I was pissed.... and turns out I was wrong.

Peyton couldn't move the ball in the wind. Apparently he has a noodle arm and he's kind of a loser.... a big thing about the game is that the Broncos rushed for 250 yards. Later we found out the Pats simply decided to keep 2 safeties back and they knew Peyton would take the ball out of his own hands and just try running it the whole game. As Tony Massarotti said, Belichick "rope-a-doped" Peyton. Again.

Obviously the play of the game was at the end. With the crowd chanting "WELLLLLL-KKKEERRRRRRR" he actually got rattled and made a critcal mistake. He didnt fair catch the punt and didnt wave off his teammates. The ball hit one of them and the Patriots jumped on the ball.

Here was our view of the game winning kick. 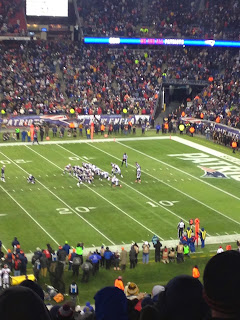 Patriots win 34-31 in OT. Biggest comeback in team history. Amazing game. We got home and in bed around 2am. Very tired, but well worth it. Also, found out the next day, this was the highest rated NFL game in Primetime since 1996! Wild.

Monday Morning was tough. I slugged my way through thew work day, looking forward to the Bruins-Penguins game. 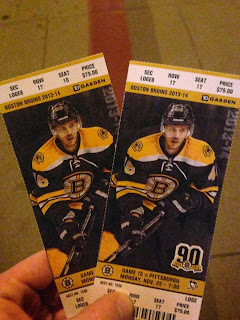 I walked over to the Garden for the 2nd time in 3 days, met my friend/client, and we headed to our seats. Here is the view we had on Monday night: 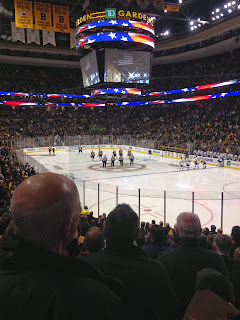 Awesome seats. Down low so you appreciate the speed of the game, and on the end where the Bruins score twice.

The Bruins were up 3-2 in the 3rd (all 3 goal scored right in front of us) when Cindy Crosby pulled off a miracle and actually tied the game with 0.2 second left in regulation. After a review, they counted the goal, and I was headed to my 3rd OT game in 3 days.

Just like on Saturday, the OT didn't last long. Claude again went with 3 forwards, and less than a minute into the OT Torey Krug did this: