Live from The Masters Round 4


(Scroll Down for latest updates)

Well, I'm not at Augusta, but I am going to update this blog as the day wears on. Here are some interesting facts and tidbits from the first 3 days of the tournament:

-14 Year old kid named Guan from China made the cut, had a tough day yesterday, but sank a 60 foot putt on 18 to end his round. Kids a beast!

-Dropgate... has to be mentioned. Everyone knows Tiger was assessed a 2 stroke penalty after round 2 for a bad drop on 18. He should be at -5.

Here is the current leaderboard going into today: 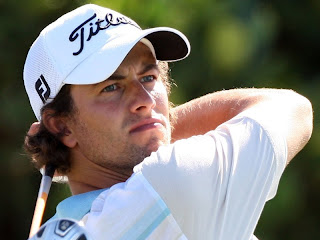 -My official prediction is Adam Scott will win, and Australia will have their first Masters Champion. Greg Norman never won here.

Right now Im watching the final round via stream, as the TV coverage does not start until 2pm. (Ridiculous)

-They are focusing on Guan, who is playing well. He looks good. I believe they just said he hasnt had a 3 putt yet this week... very impressive. Who else in the field can say that I wonder? Ill look that up. He is the low amateur this year, as he is the only of the 6 amateurs to make the cut.


- I just looked up 3 putt stats thus far. Only Guan, Westwood, and Olazabel have yet to 3 putt thus far. Guan is also leading the field in putting. Wow.

They just showed this graphic on "Live from the Masters" on the Golf Channel: 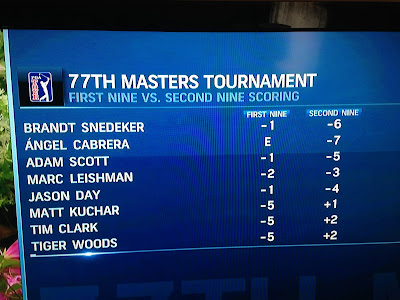 By the way, I root for Tiger in every tournament. I want him to win the Masters. I think he has an outside shot... but he obviously needs to play  the back nine better!

Heres a sweet video I took at the Deutchebank last year here in the Boston area... I almost got kicked out for this. Worth it

Tiger open with a par. It's important to note, of his 18 majors, he has never com from behind to win in the 4th round.


Kuchar is in trouble already, but Id love to see him win 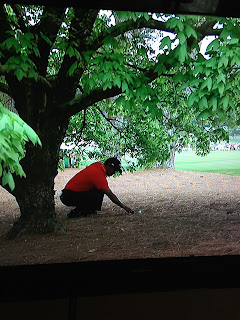 -Brandt Snedeker also has a great chance of winning the Masters today. He's the worlds #5 player and playing great with no signs of hindrance from his injury in March

-Seems like sloppy play from most of the leaders. Cabrera is all over the place. So was Tiger. Scott had a bogey on #1.

-Rain is expected to fall lightly in patches the rest of the afternoon.


-Snedeker with a birdie on #1 ties for the lead. Usually the winner of this tournament plays the last 3 holes at -2, so this course i  all about birdies early and late, and holding on in the middle.

-Tiger missed a short part for birdie on #3... doesn't seem like he has "it" today. He's 5 shots behind the leaders

-19/22 past Masters champions have come from the final group. Todays final group: Cabrera and Snedeker

Check out how the leaderboard changed throughout the afternoon. The last picture is of the current standings: 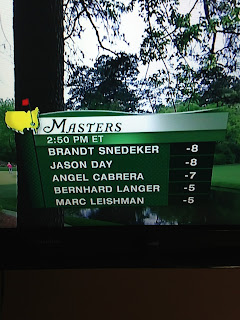 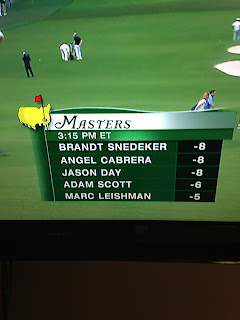 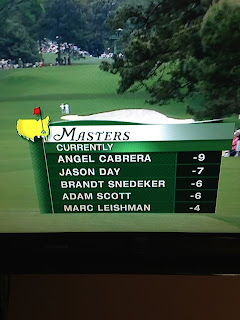 As you can See Angel has a 2 stroke lead, playing very solid golf and cool under pressure. Adam Scott needs to dominate the back nine and he's very capable. Stay tuned...


Also, after Round 1, The Godfather and I made a bet. I bet him Tiger would finished better than his boy, tricky Ricky Fowler. It was close up until now, and it's not over yet, but currently the score are: 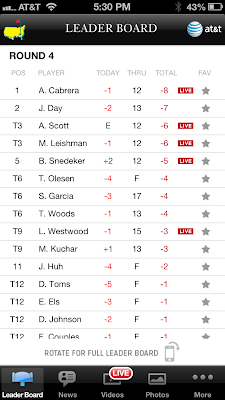 -Tiger is going for it every shot, and playing pretty well. He's too far back but likely to finish top 5 w/ the way he;s playing.

-J day has some magic in him today I think

-Angel Cabrera is still playing solid, not intimidated as the leader


Both Brandt Snedeker and Angel Cabrera hit it in the water on #13!! This is after Scott made birdie. Things are tightening up! 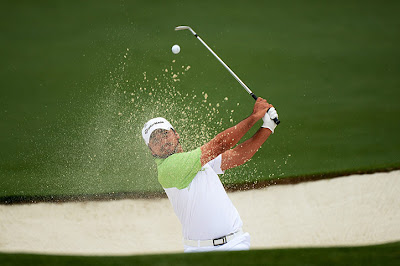 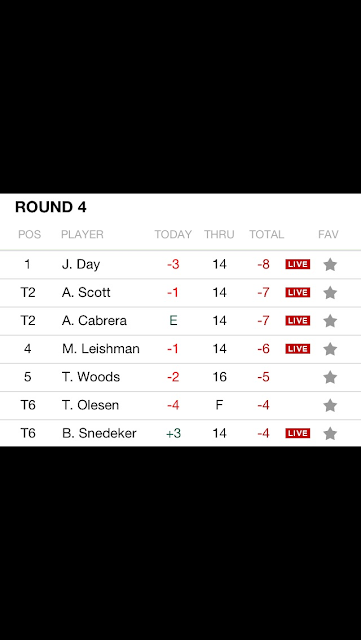 -Adam Scott and Jason Day are now tied at -8. It seems Australia has a good chance to finally produce a Masters winner. Cabrera still hanging. Tiger w/ out that 2 stroke penalty would be at -7 and possibly even better.

Adam Scott has not birdied any Par 3 this week. And he's looking good to win!

I'm liking Scott right now. He seems ready to breakthrough for his first Major win. He's been here before and never closed. out.


Tiger just saved par to finished up a 70 (-2) in the final round so he ends up at -5 for the tourney. Clubhouse leader.  Ricky Fowler, to update my bet, finished at +4 overall after shooting a 78 today. Easiest $20 I've made in a long time, thanks Abe.

Cabrera just BARELY missed a birdie on #17. He saved Par.


Scott smokes his 2nd shot on 18 to a reasonable distance form the cup. It will be a long birdie but he is guaranteed not to bogey. Cabrera had a nice long tee shot though too.

-Adam Scott with the most important putt of his career coming up. He uses a long putter.


-Cabrera NEEDS to go up and down from his spot on the fairway. AND HE NAILS IT. stuck it 2 feet away. wow. Playoff likely for a second year in a row!


-Man, what a shot by Cabrera under the pressure. Easily his best shot of the tournament. Same with Scott and that putt. It's going to be a hell of a playoff!

-Snedeker with a tough final round. He finishes with a 75 and -4 for the tourney. Still maybe the best putter on tour


And its official. Cabrera knocks down the 15 incher (something I have trouble with) to send this thing to a playoff. 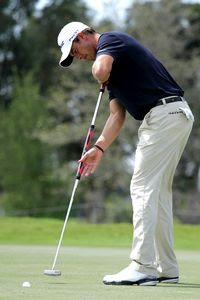 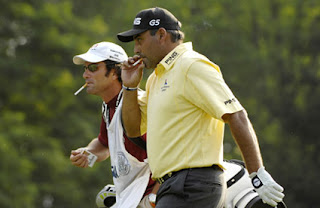 I'm sticking with my pick Scott. He wants it more. Cabrera is solid though so hopefully Scott doesn't make a stupid mistake.


-The players will make their way back to the 18th Tee for the first hole in Sudden Death Playoff for the Green Jacket. If they tie here, they will go to the 10th where Bubba won it last year.

-Scott teed off first and ripped it down the fairway. Great drive.

-Cabrera and Scott are both 1-0 in Playoffs. Cabrera won the Masters in 09 in a playoff

-Cabrera rips a drive equal to Scott's. Not sure whose up first. I know from watching Big Break Challenge, most golfers like to go first in hopes of sticking a great shot, and putting a ton of pressure on the other player to try and match


-Scott went first, kinda dufner'd it, and wound up just short of the green.

-Cabrera kinda screwed up too, and their balls land right next to each others. Chip-Off for the Green Jacket!!!

-Cabrera chips first, and comes within 1 inch of holing out! Wow another close one. Scott has nearly the same chip and cannot take more than 2 shots to get down.


-Scott goes close, 2 feet away. Would be a nightmare-ish miss

-Scott sinks the straight putt and Cabrera taps in. We are going to #10 and the rain seems to be picking up


I was actually wondering how many players watched the end of this, but my feelings were confirmed that nearly all of the do, and care. Dufner, Mahan, Simpson, McDowell all of the are tweeting about this playoff. Its actually very interesting to get their take on each shot these guys are about to take. Dufner especially is going into detail about these shots. Pretty awesome.

-Scott with another great drive on the 2nd playoff hole.

-Cabrera hits a nice one as well. I swear he is taking no longer than 15 seconds to hit his ball. Playing so fast.


-Both players hit their approach shots at about 20 feet. Cabrera is below the hole and has the tougher putt. Both makeable.

Wow. Cabrera put his put right on the edge it it somehow DIDNT fall. tough luck for AC down the stretch here. Scott with a putt for the win.