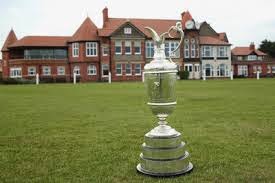 3rd Major of the year is here. Last year at the The Open Championship, Phil Mickelson finished as the only player under par at -3 (he birdied the last 2 holes of the tourney and shot a tourney low 66 on Sunday.)  Henrik Stenson finished Even and everyone else was over par. Paul won the British Open fantasy challenge last year amongst us friends, basically proving this is nothing but a fun crapshoot.

Although Tiger Woods has largely been forgotten over the past year- he had surgery in March and is just now coming back- it's important to remember that he made a late run last year at The Open and finished T-6.

This year's edition of "The Open" is being held at Royal Liverpool, which last hosted a major (The Open) in 2006. Tiger Woods won that tourney, here was the leaderboard: 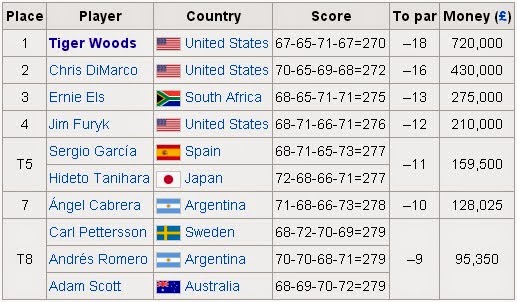 So it will be interesting this week to see how well Tiger plays, and where he gets picked in this fantasy draft. The course itself has changed a lot in 8 years, there are less bunkers. The big thing about this course (and this major, pretty much every year) is the wind and other elements. A lot of times you'll see the guys who tee off in the AM with much better or much worse scores. Truly the definition of "luck of the draw."

For the record, here are the winners of the fantasy challenges from the past. STILL haven't had a repeat winner which is pretty wild.