Back again and now we're going to be watching play from the Old Course at St. Andrew's, Scotland for the 2015 Open Championship.  Oldest major at one of the oldest golf courses in the world.  In the top 5 of every golfers bucket list of courses they need to play.  The defending champion, Rory McIlroy, injured his ankle in a game of pickup footy and won't be playing.  A real shame.  Maybe this will give Jordan Spieth a nice mental boost as he tries to capture his third straight major, as if he really needs one with the way he's been playing lately.

Obligatory picture of the course (w/ a link to the major website http://www.theopen.com/): 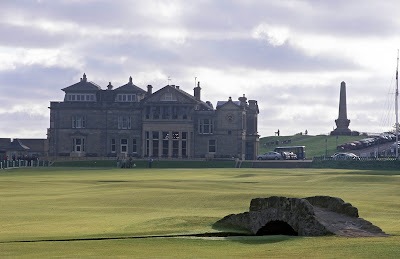 
The scores from our US Open pool:

Tie at the top broken with the pick of Dustin Johnson to make Paul the winner.

Rules:
The final score of all the players on each team will be added up and the lowest cumulative score wins. Each team will have 4 golfers.
+8 will be added to any players score who misses the cut
-8 will be deducted from the score of the team who picks the Champion
If there is a WD, that player will be given a score of the worst round from that day. And then a one time penalty of +5 (the same penalty a player who misses the cut would get.)
The draft order will be the reverse final standings of the previous major


Link to final Leaderboard:
Click here
Posted by Unknown at 11:08 AM