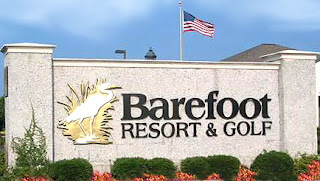 Tomorrow is October 1 and we are less than 3 weeks out from MB6.9 aka the rubber match from the past two trips when we switched to an 8v8 team format. Team #reVOLT will be looking to go back-to-back after winning MBV at Legends in 2018, while Fairway to Heaven will try to recapture the magic they had when their captains won the M on the 4th playoff hole on Sunday MB40@4.0 in 2017. This year #reVOLT starts with the virtual half point lead, with FTH needing to acquire more points to win back the M.

This year's captains are Dante and Paul for Fairway to Heaven, and Bill and Campbell for #reVOLT.

Here are the final scoreboards from the previous 2 MB trips. We will be using the exact same rules and format as the previous two trips. 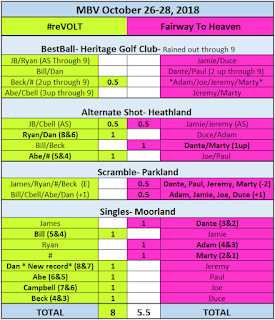 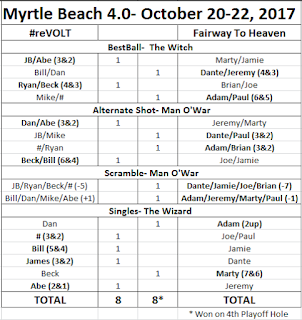 As it with every year, it’s tough/sad to see some guys not be able to make the trip, while at the same time excited to get some new faces and new guys in MB.

Who’s out?
Marty- took one look at the length of the courses at Barefoot and said he was out. And is having a baby like, tomorrow. Good luck w baby #2 Marty, we will miss you this year.

Jaime Bebrin- winless record in MB, has been relegated for a year, Hope to see a return in 2020. Everyone likes a good comeback story.

DENNIS IS IN
I’ve never been more sure of anything in my life. On team Fairway to Heaven. Total wild card on the course, I am guessing Dennis falls just below the average golfer on this trip. Likely to play better as the weekend rolls along. 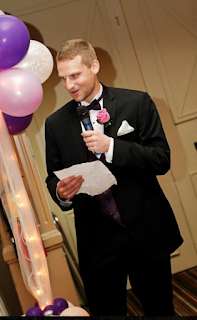 Ed
Ed was Jeremy’s friend in high school, they kinda look the same (tall lanky), relativley started playing golf the same time...you would think they may be similar type golfers.  But Ed played real sports (Jeremy was only on the bowling team) thus, he’s a better golfer than Jeremy. A true wild card for this trip, though. Very much reminds me of Marty on his first MB trip- a bunch of guys don’t know too much about him and he’s supposedly solid at golf. Marty took that reputation coming in and has left being maybe the most disappointing golfer in MB history. I have confidence Ed can be better. As long as I keep selectively ignoring the fact Ed is a massive jets fan.

Johnny
Johnny is a part of dead dogg inc hockey club. Here’s what you need to know about Johnny. Jeremy requested to be his friend on Facebook a couple years ago without knowing him whatsoever. 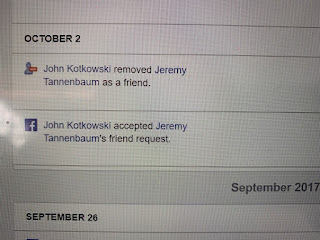 Curiously, Johnny accepted the grinder I mean Facebook request, but 1 day later dropped Jeremy from his roster. Jerermy had claimed forever that Johnny had friend requested him, but was silenced when more evidence came out. Clearly there is more left to this story, with the much anticipated "meeting" of Jeremy and Johnny in MB.

Andy
Andy is a recent MAGL staple and someone who can hit a long ball, which we needed on team #reVOLT. I've seen Andy play some great rounds, and have seen him have some bad rounds too. Playing all week in NC may be a factor for Andy, since hes old(er), but that may also help him hone his game over the course of 6 days. Andy has some good winning pedigree in him, so his compete level should be something FTH can be nervous about. 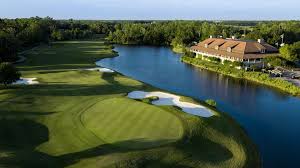 This year we are staying/playing at a new spot, Barefoot Resort. You may remember Barefoot from the best show ever, The Big Break. The resort has 4 courses on site, we will be playing them all Friday through Sunday. It’s exciting to also be playing the Thursday practice round at Oyster Bay, just across the border in North Carolina.  Below is the golf course and tee time schedule: 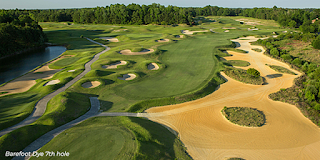 Dye Course
12:28, 12:36,12:44,12:52
Bordering the natural white sands of the Carolina Bays, this visually stunning design is filled with the infamous pitfalls for wayward shots that have become synonymous with the Dye name. Both beautiful and treacherous, the Dye Course is an experience you won’t soon forget. Pete Dye upholds his reputation of building memorable and challenging golf courses by creating a stunning design filled with his infamous pitfalls to capture errant shots. However, if played from the appropriate set of tees, players of all abilities will be able to navigate the Dye Course. There is a LOT of sand on this course.

2018 best ball @ Heritage Club
Rained out at the turn. Thanks Abe.  Team agreed to award 0.5 points to #reVOLT 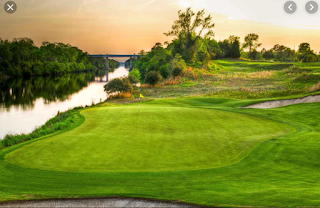 The Fazio Course at Barefoot Resort is routed through a spectacular piece of property in the heart of Barefoot Resort. Like many European courses, the course does not return to the clubhouse after nine holes. It is not a British linksland course, but rather a classic Lowcountry course, filled with live oaks, pines, sand, natural areas and native grasses. Located between the Dye Course and the Love Course, the Fazio course has been strategically designed, incorporating extensive tree cover and many lakes into the landscaping. Waste areas and formal bunkers have been handcrafted and placed for visual and strategic effect, while natural elevation changes add a sense of drama and excitement the to golfing round. Water features can be seen on 15 holes, yet many lakes are in out-of-play areas to ensure playability. 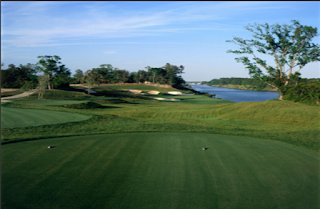 Seven holes along the Intracoastal Waterway highlight Greg Norman’s design at Barefoot Resort framed by the site’s original vegetation, each hole enhances the beauty of its natural vistas. Combined with open green complexes and fairways running up to the sand, the Norman course presents a stunning challenge for any golfer. The large waste areas and the site’s natural vegetation were used to frame each hole. The course resembles one found in the deserts of the Southwest, without the desert. For example, one hole has fairways that flow into the native areas surrounding the course while another hole features fairway and a partial rough transitioning into the native areas. A third distinction is a formal rough that encompasses the entire golf hole. There are no angular or artificial lines in the shape of the course. Bunkers have sloping white faces (similar to a MacKenzie style golf course) with intermittent sod wall bunkering at strategic locations throughout the course. The Norman Course is a Par 72, approximately 7,000 yards long and was designed with Norman’s philosophy to bring into play the”bump and run” shots around the greens. This will give the player the option to play a number of different shots.The greens are gently undulating and consist of an average green area of 6,300 square feet. 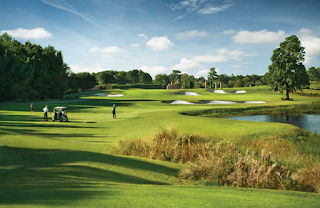 Love Course
10:12, 10:20, 10:28, 10:36
The Love course incorporates the recreated ruins of an old plantation home along holes 3-7. Wide open fairways and generous landing areas set the stage for an unforgettable round of golf. The Love Course at Barefoot Resort is a traditional course with a Lowcountry character and incorporates Davis Love III’s Carolina golfing experiences in the design. This visually striking course features course generous landing areas and green complexes similar to those found on Pinehurst #2

LAST BUT NOT LEAST

The captains have picked the Friday Best Ball matches, to be played at the Dye Course. They are as follows: