Could David Ortiz be the greatest Red Sox player of all time? 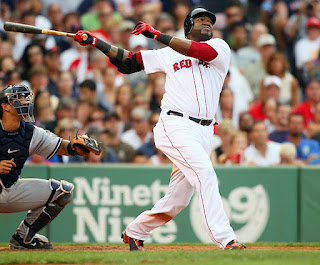 I just watched the Sox highlights from tonight and Big Papi launched 2 more HR's to break 20 on the year pre-all star break. Yesterday the Sox of course traded Youk and so Ortiz is the last man standing from the 2004 World Series history-changing Red Sox. Ortiz was the best player and most clutch player during that run-and he was also a key member of the 2007 world series as well (hit .370 that year in the playoffs.) So if the Red Sox somehow, miraculously, win the World Series this year, you have to figure Ortiz will be a big part of that. He will have won 3 world series in a span of 8 years, the only guy on all 3 teams. He made the Red Sox relevant again. He HAS to be in the conversation as best Red Sox player of all time right???