Well... I'm in the ship again. This time vs Beckerman's 13-1 team. I guess now is as good of a time as ever to breakdown our matchup. Here are the current lienups as they stand: 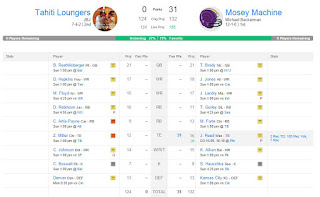 What sticks out? Oh Jordan Reed's 1,00,000,000 points in the first half of this Saturday night game thats currently at halftime? Yea. Brutal. BRUTAL. I'll get to this later but ya... if I wrote this entore blog with a salty tone its becuase of Jordan Reed/ The Eagles inability to cover the middle of the field.

First, let's take a week by week look to see how I would have done vs Beckerman this year. As a remind, Beckerman dominated the regualr season at 12-1 and easily took down the #1 seed and highest point total. His only loss was to PAUL. I took down the #2 seed, however my record paled in comparison to Beck as I finished 8-4-2 and 70 points behind. I was still the #2 scoring team, but my point here is that Beck breezed through the season.

If Beck and I played every week this year:

So yea. Beck would have beat me most weeks this year. His team cooled off significantly Weeks 10-13 but has bounced back nicely in the playoffs. On the other side of the coin, my team has been brutal recently (Losing Rawls and Ingram hurt. PLus Megatron has 2 catches in the past 2 weeks total.)  Thankfully I got that BYE in 14 or I wouldnt be here now, and I also got lucky playing Abe last week is a low low scoring matchup. SO it leaves us with this: 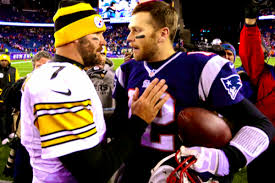 Part of the reason the MM is so good is because of the big Tom Brady year. He carried Beck in the beginning of the season. Luckily for me, he has the JETS on the road this week (Sidebar: Im going to the game. Jeremy had his baby boy today! and graciously gave me his tickets) The Pats are without Edeleman, Amendola, and possibly LaFell. What does that mean? Prob 1,000 dump passes to James White. I don;t expect Tom to have a huge day, but I also dont expect the Pats to bother trying to run the ball so Brady provides an extremly high floor.

Big Ben iis on fire this year. He was hurt for a bit but when he's played, he's been money. He just throws for so many yards.... His 16 game pace this year would easily break Peytons yardage record from 2013. This week Ben has a division game vs rival Baltimore and they need to win. I expect a MONSTER game here from Big Ben. And Im going to need it. Advantage: Tahiti Loungers 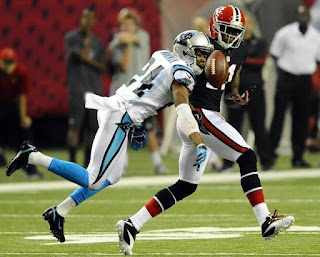 It looks like Beck and I will both be starting 3 WRs this week. Let me break down my thoughts on each one:

Julio- The big matchup with my boy Josh Norman. 2 weeks ago Julio actually managed to put up an OK stat line- 15 points- but I contend that as a Julio owner youre looking for more. I don't think he gets to 15 this week, unless the Falcons move him to the slot to avoid Norman. Norman has just been so good.... shutting down everyone. I'm very happy one of the most dangerous players in the league is likely to be more than contained this week.

Landry-  I'm scared. He's a beast. Some people are saying he's hurt or the play calling is detrimental to Landry... but he's just a PPR monster. I expect something along the lines of 8/100/1 from Landry this week .

Aiken- It's a shame Dex Bryant got ruled out because Beck was for sure going to play him, even though that would have been stupid. BUT... Dez is out and Aiken is in. He caught a hail mary last week which padded his stats, but Aiken has had a nice second half of the season, The Ravens should be down and chasing points, and the Steelers Pass D is bad. Unfortunately for me I see something similer to the Landry projection above.

Hopkins- I need a brother to step up please. Hopkins was the best WR in fantasy for a strecth this year, but hasnt been dominant recently. He has yet another new QB this week- Brandon Weededn this time- but that hasnt been the issue. He just needs targets. I really, really need DeAndre to have one of his biggets games of the season. Last game vs TEN he put up a 8/94/1 line... Im afraid I need mroe than that this week. I need multiple TDs and 100+ yards, which he's done twcie this year.

Michael Floyd- Free Agent Pick up stud. Despite sharing the lime light with John Brown and Laryy Fitz, Floyd has been great recently. The most targeted guy on the team. He has a + matchup this week with Sam Shields out, I expect a minimum of 5/80. The TD may not come but the yardage should be there.

Megatron- Bro, WTF. 2 catches in the past two games total. He's banged up, and I'm guessing a decoy. DO I roll with him? DO I sit Megatron? Decisions Decisions. He's playing what could be his last home game vs a terrible team. I have to imagine he gets fed the ball if he plays and is healthy. Right? My other option is rookie Tyler Lockette from Seattle. Who's been very good recently. Yikes. What to do What to do. As I type this line Im now down like 35 to Reed alone, so I will likely roll with who I think has the best upside. And I can't say for sure I think thats Mega.


Overall, though, I'm still giving myself the slight edge here. It's really close, but I'd prefer my trio in Week 16. 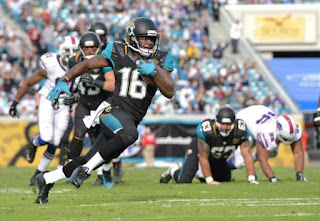 
Gurley has been fire this year, but basically the worst matchup ever on the road in Seattle. I think he may be OK, but certainly do not envision a big game coming. He hasnt been as great in the past month and Im more concerend with his team than him, BUT if he has no room to run, he cant do it all by himself.

Forte should provide a solid floor, but by splitting time with Langford, he also may not have the chance to blow up.

Denard Robinson is in line for a HUGE game. The Saints suck, he played EVERY snap last week, and he's heavily involved in the passing game. If I do end up winning, this man could be why.

I'm not sure who exactly I will start at RB2. As I mentioned, I was ravaged with RB injuries at the end of the year, and I am picking between: Cameron Artis-Payne, Ameer Abdullah, or Buck Allen. All 3 are rookies. GGGGRREEEAAAATTTT

Buck Allen- Only -1 points last week for Buck! Fumbled early and got benched. Tough matchup, basically wont rush for anything, but he does catches a lot of passes. The concern here of course is another fumble and benching. Hard to trust.

Abdullah- Electric Abdullah had his best game last week. Nothing huge, but this guy has talent. Unfortunatly hes not the passing back (Riddick), or the goal line back (Bell). Abdullah did lead in touches last week, and he can break a long one especially against the awful, awful rush D of San Fran.

Overall I'll have to call this one even. I probably would assume my RBs will outscore Beck's due to Denard alone, but not knowing who my #2 is going to be clearly muddies the waters here. No advantage. 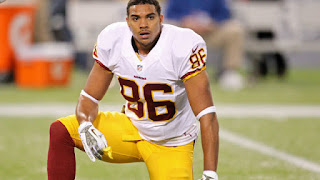 Thats not a joke, or my nightmare. That shit is real life and still going as I type this. I honestly cant talk about it or I'll cry. I expected a big game from Reed but his biggest of his career? Go Fuck yourself Jodan Reed.

Zach Miller has never started for my team. I have rolled with Travis Kelce, who's a fraud. I'm sick of his loser output every week and with Alshon out, Z Miller might actually have a pretty good game.

Im tired of typing and that last blurb on Reed killed my spirits. Whatever. We both have great Defenses and Kickers are useless AF so call this one even.


Listen, to re cap, Im down big, Jordan Reed mightmare city.BUT..... all I can think about is about 5 weeks ago I played C Bunny when he had the Dalton/Eifert connection for 3 TDs on Thursday night against me. I came alllll the way back and tied him LATE on MNF that week.

My official prediction, taking into account Reed's career night, is:


I know I still have a shot, but it's awfully hard to see me actually winning with the game Jordan Reed has had. Sigh. Go Me. I lost in the ship last year, I should win this one. But it will be an uphill battle for sure. C'mon Fantasy Gods..... let me win. I deserve it. I scrambled ALL YEAR after a rough draft, scraped and clawed my way to this point. Time to make it happen.