*note- I wrote this prior to week 14, the first round of the playoffs.

I didn't write one blog on fantasy football- apologies to my readers from the past who relied on my advice to carry their teams to championships. Just so many of you out there...

Anyway, here is how the 2015 regular season, our 7th season in existence, shook out: 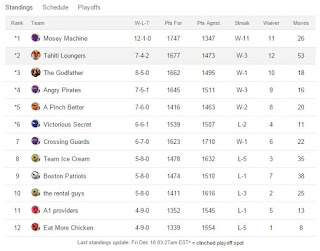 Beckerman rebounded from a bad 2014 with a great draft and had no problems in the regular season. His one loss came early- Week 2 vs PAUL, who had his best week of the season. The highlight of Beck's season came in week 7-9, starting with a 193 point bomb he laid on me. The next 2 weeks Beck scored 157 and 134. That was when Todd Gurley broke out, Julio was dominating, Brady had healthy weapons. Since Week 9, Beckerman has slowed down significantly, scoring between 113-121 every week. Still, Beckerman ran away with the #1 seed and earned the first round bye.

My team, of course, looks nothing like it did on draft day. My draft was weak... probably the worst I've had since the league started. Guys like Nelson Agholor, Roddy White, Jimmy Graham, CJ Spiller all let me down. However, being the most active person in the league once again some notable players I was able to pick up off the wiaver wire or as free agents:

The QBs are interesting as I drafted Aaron Rodgers in the late 2nd round. Another bad pick. He's currently the #5 QB. However, Jenna dropped Big Ben when he got hurt early on and I scopped him up QUICK. This gave me the ability to move Aaron Rodgers for an upgrade elsewhere. I also then had the freedom to pick up guys like T Mobile and Bortles.

I got criticized by "The Experts" all year for "trading just to trade". I think my final roster is a good piece of evidence for my case that small, strategic trades thats may seem indignicant, add up to a much better larger picture.

Some other really lucky/great moves I made to get to the #2 seed:

I traded Knile Davis back when he was the handcuff to JC for Deangelo Williams. I had drafted Leveon Bell #1 overall, but having Deangelo to fill in for him helped me for weeks.

At one point I traded Keenan Allen away for Julien Edelman. Allen of course sustained a season ending injury a couple weeks later.  I also then traded away Edelman, essentially for Mark Ingram. And of course it caught up to me in the end, yesterday Mark Ingram was placed on seaosn ending IR so I'll need to work without him in the playoffs.

That brings me to Thomas Rawls. A guy i curiously saw sitting on the waiver wire  around week 10 or so. I was wondering why Sean, the Marshawn Lynch owner, had dropped him. I figured he was a good guy to keep as a lotto ticket given Lynch's recentl injury history. Of course it worked out. Rawls is a locked and loaded RB1 for the playoffs, and a big reason why I finished the season strong enough to get the #2 seed and bye.

Lastly, I was able to acquire DeAndre Hopkins in a 2 for 1 deal giving away Stephon Diggs and Deangelo Williams. Campbell needed RB help and at the time, Diggs was beasting, with 3 straight 20+ point performances so it came together. Campbell is still strong at WR despite Diggs fading into a flex option, and has leaned on Deangelo. Real solid trade from 2 champs to help both teams get back in the dance this year.

By far the best season from Abe to date. Another team with a really strong draft, notably at WR (Green, K Allen, A Robinson). This was one of the most consistent teams all year, scoring below the league average just twice. Abe is one of the better owners in the league at making pickups- although he swings and misses a lot, he also makes contact a decent amount. James Jones was a key early seaosn pick up that allowed Abe to trade a WR for help elsewhere, and Michael Crabtree was another sweet grab back in October. It's a shame Abe lost out in points in the last couple weeks to miss out on the bye, but this is a strong lineup with depth that has a solid chance of contending. I would have liked Abe's chances a lot more if he didnt have to play week 14. You basically know what you are getting here something between 120-145 every week.

The defending champ is in position to try and go back to back. With two big weeks to end the year, C Bunny was able to climb to the #3 spot despite sketchy depth at RB and a struggle through the byes. Weeks 7-10 he went 0-3-1. The good weeks have been fueled by his WR tandem of ODB and Brandon Marshall, who was an excellent value pick in the draft. Campbell has also had 3 "monster" weeks, and carries good momentum into the playoffs.

The "worst" team to make the playoffs this year, given that Sean's team was the 4th lowest scoring in the league. I talked about the disgsuting move of dropping Thomas Rawls earlier (he kept Kendall Gaskins over him, and even still somehow is still rostering Gaskins? Wake up Bema) so when Lynch went down, Sean's season was looking grave. However, Sean won the last 2 weeks with modest totals to sneak in. The team Sean started in the regular season started hot- 3-0 and avaeraging over 130 a game. However, since Week 3, Sean hasn't topped 130, and has only been over the league average 3 times. 2 weeks ago it looked like Sean was the team everyone wanted to sneak in so they could beat up on him in the playoffs.

in Fantasy Football, things change QUICKLY. In the past 2 weeks Sean picked up David Johnson (He's a top 5 rb play this week!!!) and Sammy Watkins has stepped up big time. I still don't see enough jucie here for a true D run, but I wouldnt be surprised if Sean's best weeks may be ahead. Still may not be enough, but he has a shot.

Looking back, Kait had a very strong draft. This is awesome because she did no- and i mean NO- research. The draft was a couple days before our wedding so it wasn't on her radar as much this year. She ended up picking Doug Martin and Mark Ingram, both RB1s. Cam Newtown and Russell Wilson have each been good or great at times, and Megatron has been steady. The problem with kait, of course, is inactivity in season. Who can blame her- she basically saves kids lives every day- but man.... wake up Kait. She slowly had to trade away valuable assets as the injuries and bye weeks piled up. She started 1-4-1 through 6 weeks. Think about that. When youre 1-4-1 you dont think you have a shot at getting in. However, credit to Kait, she took some risks in the trade market, and whatever she did worked out and she got into the playoffs despite finishing with 2 losses. You have to assume the chances are not great for this team to win it all, especially given that kait traded for Edelman and lost him after a couple weeks for the rest of the fantasy season.