I still cannot believe what happened last night. The Bruins were down 4-1 with about 12 minutes left. They came back to force OT and eventually win to move on to the next series. (Video at end of blog) Here are some thoughts: 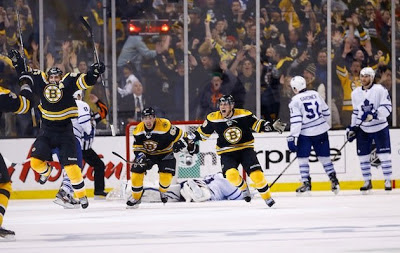 Patrice Bergeron-
What a gamer. I said on Facebook last night is one of the many reasons why #37 will be in the rafters one day. Bergy had the game tying goal with 50 seconds left and the game winner 6 minutes into OT. Couldn’t have happened to a better Bruin. Truly lucky to be able to watch this guy play night in and night out. He gives 100% all the time and isn't always recognized for the subtleties of his game (Outside of Boston) … but the entire Hockey world is giving him credit this AM.

Milan Lucic-
This may have been the best game in Lucic’s career. We all know about his struggles in the regular season, but this series Looch has been dynamite. Last night specifically….Looch and linemantes never gave up. They deserve a lot of credit for skating hard, even down 4-1. #17 scored the Bruins 3rd goal of the night, and had a great assist on the Horton goal. I know it looks like looch is slow sometimes… last night he looked fast, dominant, and came to play. As is usually the case, the Bruins go as Lucic goes. 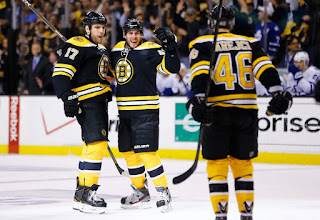 Young Defenseman-
Matt Bartkowski and Doug E Fresh stepped up in a major way last night. Ference was out with injury. Redden was a late scratch. Seidenberg got injured on his second shift of the game. These holes were filled by our 2 young D man (and Boychuk), and they both did an outstanding job. Bartkowski in particular looked dominant. He scored the game’s first goal on a great play exuberating professional patience.  Hamilton made many “hustle” plays so when he was caught out of position… he was able to recover. These guys had a ton of playing time last night and found a way to make it happen. The future is bright indeed. Thank God we didn’t end up getting Iginla… Bartkowski was the guy who was going to Calgary in that "trade" that never happened. 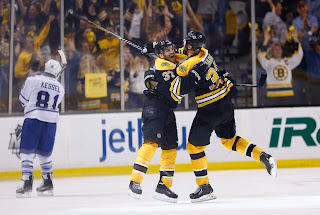 Chara-
Not a great start to the game by Chara after and early penalty killed some opening face off momentum and led to a goal, BUT still…. His 35 min TOI was by far the game leader. Chara is a true warrior and I would hate to have to face him. He’s not the guy from 2011 but he's close, and still playing at a (chuck?)Norris-like level. 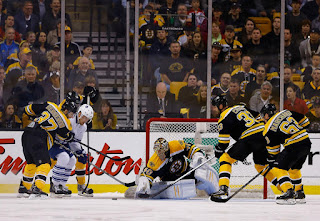 Tuukka-
Rask again was as solid as possible. Of course the box score doesn’t look great, with 4 GA, but if you watched the game you know. Rask prevented a breakaway goal that would have ended the season in the 3rd with 3 min left, and made an amazing leg pad save in OT a minute before the GWG. I don’t think theres a goalie in the playoffs left Id rather have, except MAYBE the guy we are facing in the next round. Regardless…Rask was the best overall Bruin in Round 1 and without him this team would have been embarrassed in 5 or 6 games max

Claude-
Ahhh Claude. Seemed like may have been coaching for his job last night. He finally moved Seguin down to the 3rd line and put Jagr up with Bergeron and Marchand. I just thought that was an important move and something to note. Claude lives on as Bruins coach and I for one am pretty happy about that.

Seguin & Marchand-
Look for these guys to explode next series. Our 2 most talented players were shut down for the most part this series. 0 goals between the 2 regular season leaders. They had a great few shifts towards the end of the game and in OT…. The assist Seguin had on the GWG was HIS FIRST POINT OF THE SERIES. Wild. 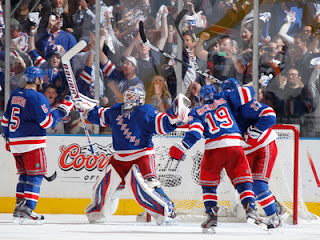 
(http://www.youtube.com/watch?v=NYanopv3NCs) for highlights if above video isn't working
Posted by JB at 8:21 AM