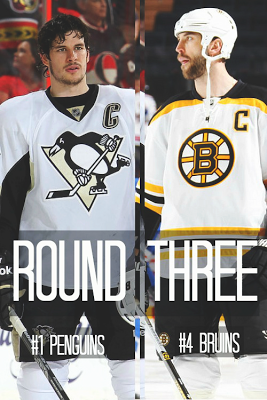 It's pretty cool and rare that we have a chance to watch the best NHL forward play heads up against  the best NHL Defenseman. Oh and don't forget the captains of their respective teams.

Sidney Crosby and Zedno Chara are most likely going to be competing head to head for almost all of this series. In Boston, when the good guys have the last change, you probably won't see many shifts with 87 on the ice sans Chara.

The Bruins are going to make sure Big Z is on the ice for as many faceoffs as possible in Games 1, 2, 5 and 7 (in Pittsburgh.) If Crosby is out there, he will stay and defend. If Crosby is off the ice, Chara will head to the bench ASAP and wait for him.

I think this week layoff has helped Chara more than anyone else in the series. Check out his amazing TOI stats from the first 2 series:

He obviously stepped up big time on the back end when Ference and Seidenberg went down. The young guys are obviously contributing as well, but their ice time has been fairly modest.  All 12 of those games were played in a span of 24 days so this time off will give Chara a chance to re charge his batteries and be ready to shut down the worlds best forward, Sid the Kid Crosby.

If the Malkin line is dominating there may be a chance of a switch up. It's also worth noting that Bergeron could be matched up against Crosby as well. Norris & Selke vs Hart. Love it.

This pic goes out to all the wrestling fans that read my blog: 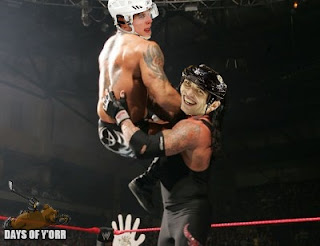