A Gem from the Past 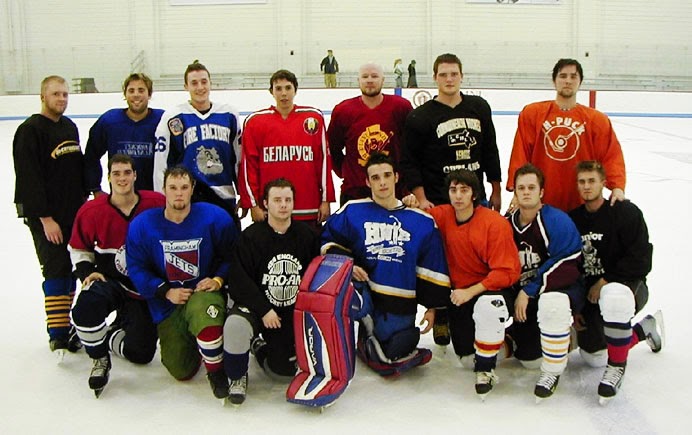 Eight teams vied for the ice hockey championship. Brew Crew entered the playoffs as the 5th seed and barely squeaked by Darren and the Rippers 6-5 in overtime. In a smartly played quarterfinal game, Brew Crew dispatched the #1 seed and defending champion Ram Rod 4-2. 30 Racks, seeded 2nd, marched through Hammerfaced 6-1 and District 5 3-0 to gain their second straight berth to the championship series. In game one, James Brown put Brew Crew up 1-0 at the 8:50 mark. It was the only goal that John Gentile let in, but it was enough. Mike Nashawaty shut out 30 Racks. Pat Galluzzo added an empty-net goal for Brew Crew’s 2-0 win.

In game two, 30 Racks peppered Nashawaty for most of the 1st period to no avail. Brew Crew’s Burke Dignam wrapped the puck around the net and through Gentile at the 9:46 mark. At the 13:12 mark, Alex Sage scored to tie the game. Later in the 2nd period, Brown scored and Brew Crew hung on to the slim 2-1 lead. In the 3rd period, Dignam’s second unassisted goal put Crew up 3-1. Brendon Ellis’s score at 5:30 gave 30 Racks new life. With one minute left in regulation, 30 Racks pulled their goalie. In a replay of game one, Galluzzo escaped with the puck and scored another empty netter, this time with 2 seconds left in the game. Brew Crew captured the championship with a game two 4-2 score over a gallant 30 Racks squad.


I ran across this on the internet this afternoon and it brought back some fun memories. Playing intramural hockey at UMass. This was my FRESHMAN year... 2005. Almost 9 years ago. I am especially proud of this because I performed so well for the team and we won the championship. In case you couldn't find me I'm wearing the orange jersey in the front row. The goalie- Mike Nashawaty- and I shared Co-MVP honors!!

PS- After this one season, Brew Crew was dissolved and I joined 30 Racks for the next 3 years. Basically the opposite career of my boy Marian Hossa.