Fantasy Football: I can't quit you. Even in the midst of Fantasy Baseball draft season, I can't get football off my mind.


Throughout this off-season I am going to try and conduct, and briefly analyze a couple mock drafts per month. I did one a few weeks ago but forgot to save it. Here is one I did this morning: 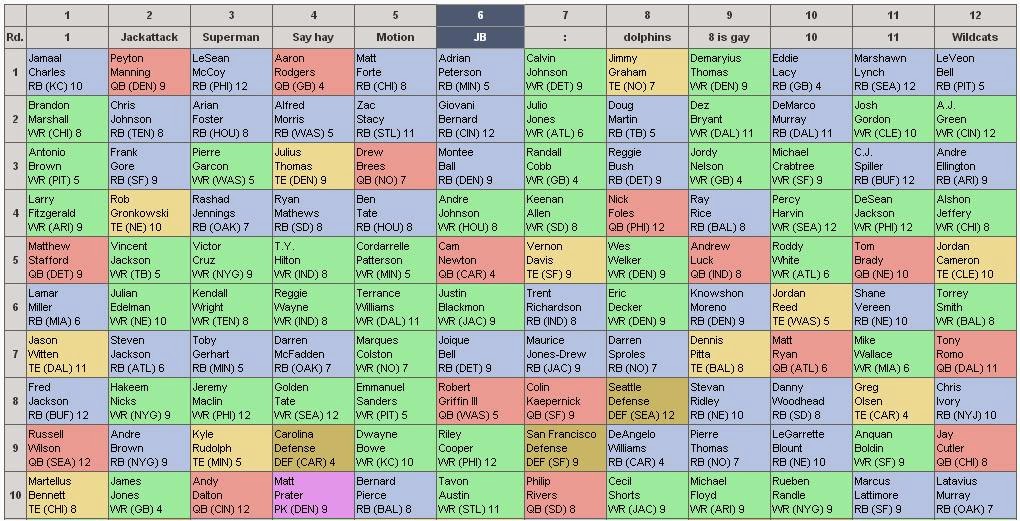 First thing to note this is NOT a PPR mock. This site, fantasyfootballcallulator.com, doesn't have their PPR mocks avail yet.

I was surprised AP fell to me at #6. No brainer pick.

I am also surprised to see the 2 QBs go so early. If 2013 taught us anything, it’s that the QB pool is pretty deep in a 12 team league. Of course it’s valuable to have a Stud, but the QBBC strategy will likely pay off again this year. As a reminder, in The Dirty D, I won in the last week with Andy Dalton as my QB. He had a good matchup and delivered a huge performance.

After leading the NFL in TDs, early indications are that Jimmy Graham converted a lot if his non-believers from last year. He went 8th overall in this mock and I’m still not even sure if that’s high enough.

The top-end WRs are almost identical to last year, with one addition- my boy Josh Gordon. Megatron-D Thomas-AJ Green-Dez-Julio-B Marsh were all drafted in the first 2 rounds last year and that’s finna be the case again in 2014.

I went RB-RB-RB in this draft, which is something I normally do not do. I couldn’t pass up AP. On the way back I felt as if I couldn’t pass up Gio Bernard either. He outperformed this draft spot last year as a rookie on a per game basis.) He seems to me like a very safe, exciting, high ceiling guy in 2014. And then in the 3rdI got Montee Ball…. There’s no way Ball is avail in the 3rd round later this year. Moreno is not returning to Denver, and they are turning over the reigns to Montee Ball. The starting RB in Denver is going to score a llloootttttt of points so yes please I would take Ball in the middle of the 3rd. If Drew Brees had been available, I may have considered him, but he went the pick right before me.

Gronk is always an interesting fantasy player. When he plays, he dominates so hard he would warrant a first round selection. But he is ALWAYS hurt. And it’s not just that he gets hurt, it’s that you can’t draft him in August and expect him to be healthy and ready to perform for your team around Christmas time. High Risk/ High Reward type player. For me, I probably wouldn’t draft Gronk until at least the 4th round. IN this mock as you see, he was avail with my 4th round pick but because I went RB-RB-RB I thought it was important to go WR in the 4th.

I picked Cam Newton in the 5th round because he has a high ceiling. He isn’t as exciting as Brees or Manning, but he puts up fantasy points. It’s almost impossible for Cam to finish outside the top 5 QBs if he stays healthy- which he probably will. He’s a big dude- He’s not Mike Vick, who is small and fast and gets beat up easy. The one caveat to this pick is that I momentarily forgot the Panthers currently have 0 NFL caliber WRs on the roster. Steve Smith, Brandon LaFell, and Ted Ginn are all gone. It will be interesting to see how this plays out and effects Cam’s fantasy value.

I picked Justin Blackmon next, although now I realize there’s a chance he doesn’t play at all this year. WTF is wrong with this guy? All the talent in the world and he can’t keep his head on straight enough to play.  He is kinda like Josh Gordon- potentially a dominant guy, but his off field issues are troubling. Remember his stat line from Week  4 and 5 of last year?

So yea, major potential there.


Overall the team I drafted is OK. The strength is obv in RBs, my QB situation is fine and my WR situation is OK. I didn’t draft a TE either, this position I feel is very hard to project out in March.

If anyone wants to participate in the next Mock I do, let me know. I’ll might do one more before the NFL draft. 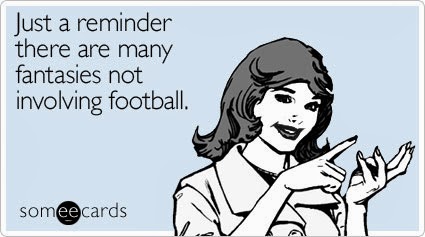