The NHL is back! stop crying. 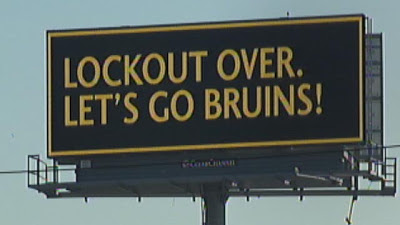 As everyone knows the framework is in place for a 8-10 year CBA between the NHL and it's PA. The season is probably going to start on 1/19 and the regular season will end sometime in May.


I just want to state here that everyone who is still upset at the NHL and the PA needs to just stop, & let it go. Listen, yea, the lockout sucked. I hated it. I'm pissed I haven't seen an NHL game in 7 months and I'm pissed about all the amazing moments that never happened. Could the lockout have been avoided? Maybe. But what the typical fan is not considering is the business aspect of the game. It was a labor disagreement in a multi-billion dollar industry. This is America. That's what happens. Get over it. Can we all just move on, and enjoy the sport we love and so desperately wanted back?? This sort of thing comes with the territory of Pro Sports. Every league goes through their own unique labor issues. If they lost the entire season I may be singing a different tune, but that didn't happen. Hockey is back.

Now, for all those fans who think this year is a "half season" or that the winning team won't fully deserve the cup because of the shortened, 48 game season:

You are dead wrong.

Most people agree on a year to year basis that the standard 82 games are more than necessary to determine the playoff teams. The reason why you will never hear the NHL even consider dropping games off the schedule is strictly a revenue issue. If they league were to construct a schedule of games based exclusively on fair competition, the season would probably end up being a lot closer to 48 games than 82.

I've heard this discussed on the radio before, but here is some pretty telling data supporting the 48 game schedule:

Clearly, this shows that a 48 game regular season is more than adequate. If your team isn't in the playoff picture after 48 games, you're probably not good enough to make it anyway. The playoffs this year are still going to have four, best of 7 rounds so the Champion is still going to have to achieve Mission 16W. 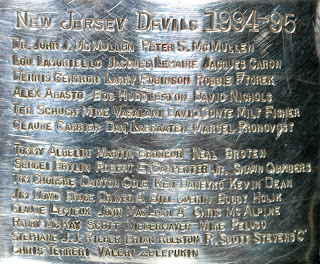 The 1994-95 season was shortened due to a lockout, and the teams played a 48 game schedule. The Devils won the Cup that year and I have NEVER heard one single person, website, or media outlet put an asterisk next to that team or season. That Devils team was young, and some haters at the time probably argued that those Devils would never have won in a full season. Well, that was disproved quickly after the core of that team went on to win 2 more Cups. 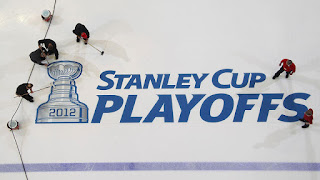 Also, this post was inspired from a Facebook mini-debate on a friend's status. The person (assuming a STH) who tried to convince me that this was a "half season" also mentioned that they were going to to try and stick it to the NHL Owners by not purchasing their playoff tickets. This person said they were already financially committed to the regular season but would put no more $ in Jacob's pocket this year and figures that if everyone (STHs) refuse to but their playoff strips that the Bruins will be hurting financially.

This, again, makes NO sense whatsoever. The demand for playoff tickets is exponentially higher than the regular season. The Bruins would actually prefer their Season Ticket Holders turn down their playoff strips because the team can then sell those tickets at a much higher rate to the general public. If you try to convince me that there won't be enough demand on the secondary ticket market for the playoffs, I am going to laugh out loud and make fun of you to my friends. That is the most ridiculous thing I have ever heard. As a former ticket sales rep for the Bruins themselves, I can assure you that there is no shortage of interest in playoff tickets, especially if the Bruins are matched up against a marquee opponent, and especially because once the playoffs start we will be 5 months removed from this whole mess. After an intense season, fans are going to be lining up for playoff tickets once again.

Lastly, The person I was debating with said this:

"In Canada according to a random poll 58% of hockey fans say they won't buy playoff tickets cause it a Half Cup! They don't earn the Cup with only 48 games without competing every team and playoffs! This number goes to 62% for only season ticket holders! Source Montreal Gazette"


A. I would love to see this article. Please link me in the comment section if your reading this and you know where to locate that article.

C. Not sure what the "without competing every team" line means.  It may be alluding to the fact that there is only going to be inter-conference play during the regular season? I don't have any facts on this but I'm pretty sure most people love this idea and may think this is how it should be every year. This is how the NHL used to play anyway. This is also how the schedule was structured in 1995 and again, no one eever takes anything away from those Devils who won the cup that year.


Anyway, as soon the the NHL schedule get's released I'll write something up here. Each game is like 2% of the season so I for one expect THE most exciting regular season of all time. I welcome all opposing views and points in the comment section!