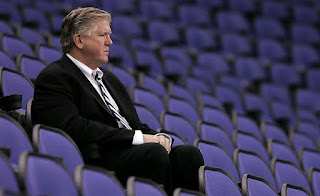 The news came down today that the Toronto Maple Leafs GM Brian Burke has been fired (or at least has given up his duties as GM.) He will be replaced by Dave Nonis, who has been his assistant GM with the Leafs and who also took over for Burke after he was fired by the Canucks about 10 years ago.

Nonis traded FOR Roberto Luongo in his first year as GM of the Canucks back in 2005, now it will be interesting to see if he trades for him in the first WEEK as GM of the Leafs.

First things first is I have a lot of respect for Brian Burke. Lets take a brief look at his NHL career: 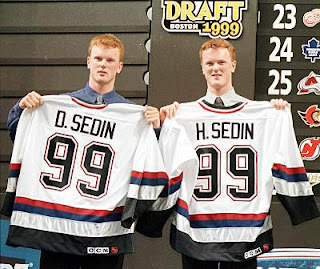 -In 1999 Burke and the Canucks owned the 3rd overall pick. He ended up trading with Atlanta and acquired the 2nd overall pick as well. That year's draft was held in Boston and with those twp picks Burke selected The Sedin twins. Possibly the greatest draft selections ever. Took a lot of guts to pull off a trade like this and Burke nailed it.

-Burke came to Umass in 2008 and spoke to one of my classes. The general purpose of the talk was just to inspire some sport mgt kids, I think. I remember Burke specifically talking about getting fired, and how EVERYONE you know, knows you got fired and how it's all over the news. It was pretty interesting stuff, and especially relevant to right now when Burke's name is being tossed around like a rag doll in the media

-Burke was part of Team USAs selection coaching committee in 2010. Another major reason why I like this guy- his involvement in USA hockey

-In 2009 Burke attended the Toronto Gay Pride Parade with his gay son, Brendan. Unfortunately in February of 2012 Bredan passed away in a car accident. To honor him, Burke and one of his other sons created the organization "You Can Play" project, who's target goal is to end homophobia in hockey. 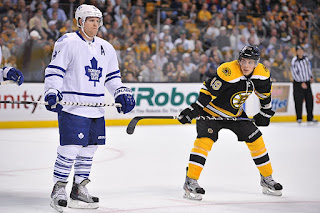 -On September 18, 2009 Burke pulled the trigger on a trade that sent away 3 draft picks to the Bruins in return for Phil Kessel. Kessel has been OK since then, but that 09-10 season was a disaster for the Leafs. They finished with the worst record in the East, and the draft pick they traded to Boston ended up being the #2 overall pick in which the Bruins selected some guy named Tyler Seguin (Spawning one of my favorite Garden chants ever- "Thank-You Kess-el".) The other 2 picks from that trade brought back Jared Knight and Dougie Hamilton. This clearly has the potential to be the most lopsided trade in NHL history, but at least Burke had the stones to pull the trigger on a blockbuster. Unfortunately for him, it didn't work out, at all.

So basically I wanted to write this post to praise Burke, while at the same time make fun of the Leafs for their irrelevancy and of course to thank them again for Seguin, Hamilton, and Knight. I hope one day soon the Leafs can rise up and be a force in the NE division. I'd love to see a modern day rivalry grow between the Leafs and Bruins, after all they are in-division opponents.

2 stats I will leave you with:

The Leafs haven't made the playoffs since the 03-04 season

The Leafs haven't won the Cup in 45 years 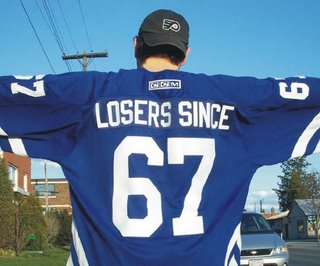