Time to Lock Up Tuukka!

The past few Bruin’s seasons have been fun to watch, especially for those fans that followed the team during the dark, dark Mike O‘Connell era (which mercifully ended in 2006.) Most of the success from the current Peter Chiarelli era is due to his hiring of defensive-minded coach Claude Julien and the risk he took on Tim Thomas, which we all know paid off in a big, big way.
On June 24th, 2006 Chiarelli somehow flipped Andrew Raycroft for Tuukka Rask, who was drafted by the Toronto Maple Leafs in the first round of the ‘05 draft.  At the time they thought some dude named Justin Pogge (LOL) was their goaltender of the future, despite the fact that 20 year old Rask was named top goalie of the 2005 World Juniors.
Since then, Thomas and Tuukka have shared the net for the Bruins and completely dominated. Although Thomas was always the clear #1, an injury in the 2009-10 season opened the door for Rask to get extended playing time. That season he started 45 games in the regular season and led the entire NHL in both Goals Against Average (1.97) and Save Percentage (.931)
That was the year the Bruins choked away the 3-0 series lead vs. the Flyers in the 2nd round of the playoffs. Rask himself didn’t play awful, but he certainly didn’t win any games for the Bruins either.  It’s important to remember he out-dueled Vezina winner Ryan Miller in the first round that year, before the collapse. The Bruins coaching staff felt as if Tuukka had earned the starting nod and in the first game of the next season, in Prague, Rask got the call over Thomas. However, Thomas played out of his mind in October of 2010, took his job back from Rask almost immediately, & never looked back on his way the best season all time by a goaltender (which of course ended with a Stanley Cup and Conn Smyth trophy win.)

Rask’s patience paid off again, however, when in the Summer of 2012 Thomas decided to go AWOL and retreated to a bunker in Colorado to pound Chik-Fil-A sandwiches or something.  The Bruins and Rask agreed to a 1 year deal worth $3.5 Million for this current 2013 shortened season. This is widely thought to be a “prove it” contract, which I always love because it means the player believes in himself and realizes contracts are earned, not given.
It is fair to say the concern the Bruins have with locking up Rask long term is a history of groin issues, which is NOT something a goalie ever wants to deal with.  They want to see Rask carry the load for a full season, and perform in the playoffs before committing to him.
My opinion is that Rask has done enough this season to command a long term contract. Chiarelli has a long history of signing players to extensions mid-season, and I wouldn’t be surprised to see this happen with Rask any day now.
This season Rask is 9-1-2 in the 12 games he has started.  He again has that 1.97 GAA to go along with a .925 save percentage. The Bruins PowerPlay is top in the league, and everyone knows your best penalty killer has to be your goalie. Most importantly, Rask passes the eyeball test on a nightly basis.  He is confident in net and his teammates trust him. His overall attitude is admirable- throughout the years he could have requested a trade, he could have started problems in the locker-room, but by all accounts he is a great teammate and an extremely competitive guy, which is something I really like about him. Next time he gets scored on watch how pissed he gets. This is the type of guy I want on my side. 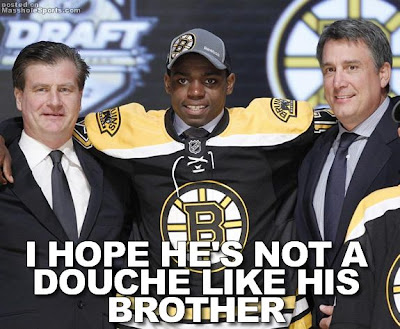 Now, the question is, what type of contract should the Bruins extend to Rask?  Some important things to consider are his age- Rask is about a week away from turning 26- and the fact that the Bruins drafted 19 year old Malcolm Subban in the 1st round of this past year’s draft.
Here are highest paid  goalies in the league, their age and salary cap hits:
Corey Schneider is commonly compared to Rask & this past off season the Canucks signed him to a 3 year, $12 Million deal. I think that's way too low for Rask. I'm looking at the Carey Price 6 Year, $39 Million deal and thinking Rask commands something in that neighborhood.
I would expect the Bruins to offer Rask a competitive deal, and Rask seems like the guy that may not be looking for top dollar, as long as he is getting paid fairly and playing for a contender in a good situation, which is obviously the case in Boston. I especially think he can be convinced to take lesser money so that there is more cap space available for the rest of the team. After-all,  the Bruins play great TEAM defense and help the goaltender out a lot more than some other teams do.
My guess is Chiarelli extends a 6 year, $33 Million offer to Rask. It makes sense because by the end of this contract the Bruins would know what they have in Subban, and Rask would be 32- old enough to still be in his prime and possibly be dealt or even extended for 3-4 more years. Do not forget, Chiarelli signed Thomas to a 4 year contract when he was 34 years old, so he clearly is not afraid of aging goaltenders. Rask would probably accept this deal as well; 6 years is a long time to have a guaranteed salary and he would be paid as a top 5 goalie in the league.
We will see what happens but I am confident Chiarelli both should and will lock up Tuukka before the season is over, maybe he will even do it as a birthday present to Rask who turns 26 on March 10.