It's mocking season! Love it.

Me (JB picking 4th), Adam (A-Bomb picking 5th), and Bill (SPORTS RADIO picking 12th) participated in a mock draft this morning. Here are the results and my quick  analysis below:

You may have to click on the picture to enlarge it enough to see each pick. Or you can click the link below.

I'ts important to note that I "timed out" after my 5th round selection and the computer auto-drafted the rest for me.

This mock was done on Fantasy Football Calculator 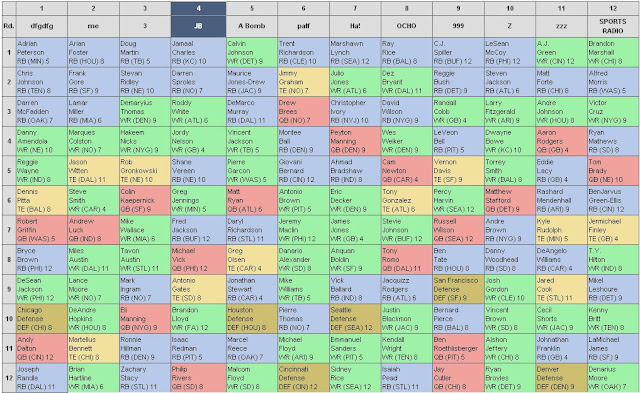 My pick: It came down to Charles or Rice for me at pick #4. I'm not going to be that guy who picks Megatron over one of the top 5 backs, who to me, are AP-Martin-Charles-Rice-Foster in that order.

Adam's Pick: Megatron should continue to post incredible numbers so there is minimal risk in drafting Megatron, although selecting a WR in the 1st round means you need to focus on RB with the next couple of picks.

Bill's pick: Marshall is a stud. He always puts up numbers with Cutler and is a very worthy selection at #12. I think when it's all said and done he is my #2 WR this year behind Megatron.

Best pick: All of them. All good picks. #1 did a good job of not over thinking and taking AP.

Worst pick: None of the picks are bad, but as I mentioned above I wouldn't take Megatron over Rice like Adam did here, even though he is safe I would rather not be in scramble mode for RBs the rest of the draft.

My Pick: Darren Sproles... stud PPR RB. Sproles has limited upside, mostly because hes not really a running back, but hes still a very safe pick at the end of the 2nd round in PPR leagues. He's a lock to finish in the top 15 assuming he stays healthy.

Adams Pick: MJD. Adam gets lucky that MJD falls to him late in the 2nd round. He has some injury questions but I'm in the camp that believes in MJD so this could end up being a great pick. Before he was hurt last year MJD was a top 5 RB in fantasy points per game. He's supposedly healthy and if so, the Megatron-MJD 1-2 punch would be deadly

Bill's Pick: Alfred Morris. I think I would have taken a couple other RB's over Morris here, but at this point in the draft its all personal preference. Morris was a stud rookie last year, and as long as RGIII is healthy and under center, Morris will rack up points.

Best Pick: Jimmy Graham at 2.07 was a steal. Graham is so far ahead of any other TE (with Gronk hurt) that a mid 2nd round pick is a great time to draft him. Instant monster advantage at the TE position every week. Graham is safe, too.

Worst Pick:  Reggie Bush as the 4th pick in the 2nd round seems to high for my liking. Yes, he's in a great situation in Detroit, but I worry about Reggie's durability and likely lack of rushing TDs. Basically if Reggie has a great season, he's Darren Sproles, and you're looking for more upside than that with the 16th overall pick.

My Pick: Roddy White. After going rb-rb I decided to go WR with this pick. Roddy has everything you are looking for in a WR1. Hes consistent. He's low risk (healthy.) He plays on a high-octane offense with a good QB. He's always been a favorite player of mine and was an easily selection as the #7 WR off the board.

Adam's Pick: DeMarco Murray. This is what happens when you take a WR early... you are forced to go RB-RB and Adam grabbed Murray as his RB2. He could do worse, but I'm not a huge fan of Murray. He's electric when he plays, but seems to be one of the guys in the league who cant stay on the field no matter what. He's missed 9/32 games in his NFL career and came in with injury concerns. He's a lot like Darren McFadden in that hes am absolute monster when he plays, but you KNOW he ain't going to play all the time.

Bill's Pick: A situation you do not want to find yourself in: 1 RB on the roster at the end of the 3rd round in a RB-heavy draft. That's where Bill was here, not ideal. He ended up taking Victor Cruz, Umass Alum, who should bounce back to WR1 levels.

Worst Pick: Darren McFadden at 3.01. Too much risk to waste the 25th overall pick on McFadden, ESPECIALLY after already having 2 RBs on the roster. I hated this pick. With every QB and all the WR talent on the board, you cant be "wasting" a pick on McFadden here.If he took a safer 3rd RB I wouldn't have too much of an issue with the pick, but McFadden? No thanks.

My Pick: Jordy Nelson. I love this guy. He's a favorite target of Aaron Rodgers and has major talent. He's big, he plays on the inside AND outside, and he's a stud. He was the #2 overall WR two years ago, and was pretty dominant last year until his unfortunate ankle injury. If this guys stays healthy for 16, which he should, he's a shoe-in for low end WR1 numbers.

Adam's Pick: Vincent Jackson. If Adam had selected Nelson, I would have taken V Jax. His move to Tampa worked out well for him, as he put up monster numbers last year. He's boom or bust, which to me causes a slight downgrade, but man, he explodes when he has a big game. If Freeman can take the next step like everyone thinks he can/should, V Jax will put up even better numbers. He led the league in average yards per catch last year... I expect another dominating performance in 2013.

Bill's Pick: Ryan Mathews at 4.01. This is where Bill's draft went astray. After going WR-RB-WR, Bill felt forced to grab another running back and reached for Mathews. At this point in the draft, I would have preferred Bill to wait on RB and make up for it by selecting Aaron Rodgers here as the 2nd QB off the board. Mathews is no longer a 3 down back, his clavicle is made out of porcelain, and the Chargers offense is a mess. They brought in Woodhead to play on pass catching downs which downgrade Mathews even more in PPR.

Best Pick: Aaron Rodgers at 4.02 is a steal. I know QB is deep but at some point you have to value the fact that Rodgers has never finished worse than #2 overall in fantasy QBs. Locking up 25 points a week in the 4th round is gold.

Worst Pick: I already went over how much I didn't like Bill's pick, so my next least favorite pick was Montee Ball. Of course with rookies we don't know their role or involvement yet, but based on John Fox's history, I'm not trusting a rookie RB as my 2nd running back. The team should have selected a WR instead IMO. Ball/all rookie RBs struggle with pass protection and last time I checked the QB for the Broncos is kind of fragile and holds the key to the Broncos winning games. They are going to want to protect Manning as best as possible so Ball could see limited playing time. Ball COULD be a TD beast this year, though, so it's not a totally bad pick, just not the selection I would have made. (At least not now, before training camps and pre-season.)

My Pick: Shane Vereen. I wanted to grab my 3rd running back before another 16 people went so I went with my favorite guy left on the board, Shane Vereen. Gronk-Hernandez-Lloyd-Welker-Woodhead are all out of NE this year (Gronk for 6), and I like Vereen to pick up some of that receiving slack. The Pats started using him more last year in the 2nd half, so it's possible Vereen could break out this year and turn in some great PPR value.

Adam's Pick: Pierre Garcon. I like this pick a lot. I liked Garcon a lot last year before he was injured. If RG3 is healthy all year and Garcon can stay on the field, he will easily outperform this draft position. I'm a believer.

Bill's Pick: T Brady. Nice Value here with the last pick in the 5th round. Brady is Brady and will be fine, despite losing all his weapons.

Best Pick: Cam Newton at 5.08 could be a monster steal. Newton is a beast and has the potential to finish as QB #1.

Worst Pick:  Vernon Davis at 5.09. Don't like this pick at all. Davis is probably going to have a good season, but there were too many other needs this team should gave addressed instead. WR or QB was the way to go with this pick.

If I didn't time out, I would have selected RG3 with my 6th round pick. That makes my team nucleus of Rg3, Roddy, Jordy, Charles and Sproles REAL tough to beat. I definitely would have liked my team the best if I could have finished drafting, but other teams I really like are:

OCHO- Thin at RB but if Wilson emerges as the starter we think we might, I like this squad

Team 3- I really like the core Martin-Ridley-Thomas-Nicks. And this guy took Gronk so if he's back to full strength by week 6 off the PUP, this pick looks golden.

Team 2- Don't like Frank Gore and too many eggs in the basket of unproven Lamar Miller.

999- I like how the draft started for this guy but you cant be taking Percy and Wilson right now in light of the Percy Injury news.