Phew. OK. Lots to talk about in this blog about the transition from the 2013 Bruins to the 2014 Bruins.

I've decided to expand fully on all of the transactions the Bruins are involved in, as well as a bunch of other signings around the league

Let's  break down the frenzied off-season so far, player by player:


Who's Out: Tyler Seguin, Nathan Horton

Tyler Seguin was unexpectedly traded on July 4th to the Dallas Stars in return for Loui Ericksson and 3 prospects. This came as a shock to me and others for a few different reasons. It was widely reported the Bruins had been shopping Seguin in the week leading up to free agency, however once Nathan Horton informed the Bruins he would be moving on to quieter pastures, Chiarelli noted that trade talks on Seguin "dried up." At the time the Bruins GM went on to say he hoped the trade talk would serve as a wake up call for Seguin. Chiarelli openly said Seguin needed to be more professional. Couple things on that:

1. Each Bruins player has an exit interview with the GM and Coach before leaving for the Summer. Obviously Chiarelli must have expressed these "unprofessional" concerns to Seguin directly during the exit process. I'm not sure if Seguin didn't respond how Chiarelli wanted, or what- but I think it's worth noting that Chiarelli then went to the media to publicize his critical thoughts on the 21 year old. That's something you don't see often. Also, I think it's BS people are out there saying Seguin was partying his ass off and not giving a shit about the Bruins. C'mon now. If Seguin is/was out partying in Boston on a nightly basis we would have known. Its called twitter. Boston athletes can't hide in Boston. Too many people care and it's too small of a city. And so what if he goes out after a game on Saturday (as long as the next day is an off day)? He's 21. If his partying was out of control, we would have heard about it before he got traded.

2. Something else you don't see often: A team talking shit about one of their own players and then trading that player days later. I mean seriously, Chiarelli must truly not have been expecting to trade Seguin when he called him unprofessional. Trading 101 is that you pump up your players as best you can, call attention to their strengths and try to make excuses for their weaknesses. Chia did the opposite, which some will argue hurt Seguin's trade value. It's one of those things you will likely never know how it went down, but I'm guessing all Seguin trade talk was dead when Chiarelli scolded him in the media (or else he wouldn't have) and somehow, someway the Stars reached out to the Bruins and made them an offer they couldn't refuse.

Here's where this blog gets real and I give my solid, well thought out opinion on Seguin being traded. 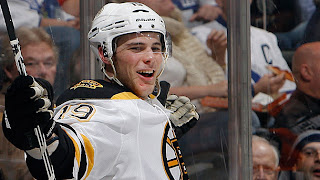 This move, to me, was more of an affirmation of Claude and his defensive system than an indictment of Seguin. Seguin just doesn't fit here in Boston. He's a natural center-man... here in Boston we are all set with Bergeron and Krejci at the pivot. Seguin is also a player who will excel in a higher octane offense that allows him to take more chances. Michael Ryder scored 36 goals in his first season with the Stars after scoring just 36 with the Bruins the previous 2 years combined. That's right, he doubled  his goal scoring rate after he left Boston. I don't think there is any doubt Seguin will have similar results and  is a candidate to hit the 40 goal mark for the Stars next year. He could threaten 50 if things fall into place for him. He's going to get ample PP1 time, he will be playing alongside Jamie Benn, and will show everyone why he was the 2nd pick overall in 2010.

Outside of Seguin not fitting into the Bruins system, the other major reason why he was shipped down to Dallas was for financial  reasons. Seguin's cap hit is 5.75 Mill for the next SIX seasons. That's a long commitment. Could the Bruins have made it work with Seguin? Sure. But this certainly allows more breathing space for Chiarelli and the front office crew. Eriksson carries a cap hit of 4.25 mill so it's not a world of a difference, but 1.5 Mill can go a long way. The Bruins need to sign Tuukka and extend Bergeron. They would rather give the money to these guys over Tyler Seguin and I don't think you will find ANY Bruins fan who can argue that. Unless you want to pay for shootout points.

Man, talk about disappointing. Last week when Horton's agent informed the Bruins he was looking to go elsewhere, everyone was somewhat shocked. The guy had it MADE here. He was universally loved in Boston and excelled on the top line for the Bruins. Sure, he was called out periodically by the media for just "going through the motions" at times in the regular season...but is that really a huge deal? He's always been a big performer during the playoffs, which is really what matters. Horton was the only winger who wasn't dropped down or demoted for any game this year. Julien continued to show the utmost confidence in Nasty Nate through the entire playoffs. Horton is immortalized as Mr Overtime forever in my book for his uncanny ability to show up around the net in the extra periods.


Horton signed a 7 year deal with the Columbus Blue Jackets for 5.35 Mill per year. Has Columbus ever attracted a free agent like this? I don' think they have. Horton will be able to live his quiet non-playoff life in Ohio and collect monster paychecks until he's 35. Whatever. Clearly the guy isn't the champion we all thought he was. He tricked everyone by asking out of Florida... people thought he wanted to win championships. (plural) Hey bro if you wanted a quieter life, you should have stuck around Boston and  moved to the burbs. Commute into Boston. Now you'll be golfing in April every year. Clown/Fringe move by Horty here IMO.


However lame he is, I'm still going to use this chance to thank Nathan Horton for his time here in Boston. After all, he is a free agent and its his personal choice to do what he wants.  Horton's Game 7 winners in 2011 from Montreal and Tampa are 2 of the greatest moments in Bruins history.
When it comes down to it, If my grandkids ask me who Nathan Horton is you know I'm always going to say he was someone the Bruins needed in 2011 to win the cup. Especially for these 4 key moments:

All of these moments and more can be seen in this 3 min video highlighting Nathan Horton's 2011 Playoff run.

Peverly was included in the Seguin trade to Dallas, my guess was that the Bruins told the Stars to get Seguin they had to acquire Peverly as well. He is making too much money as a bottom 6 guy (3.25 Mill) and should never have been extended last offseason. Again, with Peverley, his story in my head was a guy we acquired at the deadline in 2011 who stepped up big time and scored a couple big goals. Great role player and PK guy because he's fast. But he's gone and wont be missed.

The Bruins' great back up from last year (who deserved significant consideration for 7th Player Award) decided to leave and go back up Cam Ward in Carolina. I'm guessing Dobby wanted to play in an organization where he had a better chance at playing full time and ruled out a return to Boston right away.  The Bruins are about to extend Rask a max length contract, plus they have AAA standout Svedberg, outstanding prospect Subban, and now a back up guy in Chad Johnson who they got via free agency for $600,000. He's played 5 total NHL games for 2 different franchises, but he's $400,000 less than Khudobin I suppose.


Who's In: Jarome Iginla, Loui Eriksson 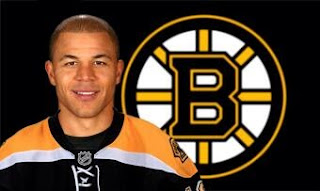 Has anyone ever represented a term or saying better than Jarome Iginla does for "If you can't beat 'em, join em." ? (Maybe Hossa?) Finally, Iginla is a Bruin like he should have been 3 months ago. I'm fairly certain if we had Iginla at the deadline instead of Jagr we would have likely won the Cup. Iginla is a great fit for the Bruins, and he will soon make everyone forget about his decision to join the Penguins over the Bruins at the deadline. After getting shut out and swept away by Chara & Co., Iginla agreed to a 1 year deal with the Bruins with only 1.8 Mill counting against the cap. If he hits certain performance levels, which he is expected to do, his salary and cap rise to 6 Mill and the leftover 4.2 Mill count against the Bruins' cap number next year. A 35 year old future Hall of Famer who is highly motivated to finally win a cup. People should be more excited we landed Iginla. Let the past go. He's going to be a beast here whether he ends up on the top line with Lucic and Krejci or on the second line with Bergy and Marchand. Maybe most importantly, Iginla (plus fluid, offensive defenseman) may be the missing piece the Bruins have been looking for on the Power Play. Iginla is a horse on the man advantage so look for the Bruins to improve on that weakness moving forward. 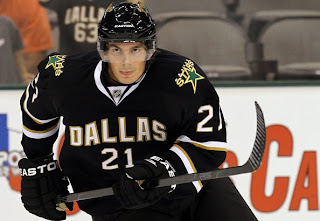 Right off the bat, this guy has 2 things going for him. The first is that he spells his first name like a boss. The second is that he wears #21 which is my favorite number and it just so happens is available on the Bruins now that Ference has departed.

Since becoming a full time NHLer in 2008, Eriksson has had seasons of 36, 29, 27, 26 and 12 goals this year in the shortened season. He is a known commodity. Just like Seguin not  being the right fit for the Bruins and they system Julien uses, Eriksson may be a great fit. He's a good playmaker (about 45 assists a year) and should slot in well with either of the Bruins top 2 lines. Eriksson doesn't play a heavy game, but he's defensive responsibly and probably starved to play in a hockey market like Boston. He's a left handed shot who plays RW. I'm looking forward to getting to know this player. Also, no doubt losing Seguin is a disadvantage in the Shootout moving forward, but Eriksson has moves too.

Heres a highlight video of Eriksson

Bruins top 6 forwards before these moves:


So yea, the Bruins may have gotten older and slower up front, but they saved money and got some valuable assets. I love that Chiarelli is active and making moves for the present. The Bruins will be signing Rask to a 6-8 year deal soon and look for a Bergeron 8 year extension as well.

(Although keep in mind the Bruins also got Dougie Hamilton from that trade so we can keep thanking Special K for years to come, just not for Seguin)

*Stay tuned for my notes on ALL the other NHL free agent signings. I plan on writing a blog with each signing and a blurb on my thoughts and how each signing effects the Bruins, if at all.