A Closer Look at the 2009 rental guys championship

Fantasy Football is around the corner. What goes hand in hand with fantasy football? Shit talking. There's a lot of it in our Dirty D league, that's for sure. Specifically, Dan (the rental guys) and myself talk the most trash about/to each other. Over the past few years the topic of Dan winning the inaugural Fantasy Football season has come up numerous times. I decided to break down Dan's 2009 season and figure out how exactly he won.

First, it's important to know that in 2009 we had a slightly different format. 4 teams made the playoffs (instead of 6) so there was an extra regular season week and only 2 playoff wins were required to win the championship.

It's also important to note that with ANY Fantasy Football championship comes some luck. Fantasy Football overall is a very "lucky" game. Of course, the real science is putting yourself in the best position to get lucky. Doing research is very important and over time, the cream of the crop will rise. Each individual week, though, the best fantasy football player could lose to the worst fantasy player very easily.

the rental guys won the 2009 Championship. Dan's name is on "The D" and that's all that truly matters. That being said, Dan got crazy lucky in 2009 and here's why: 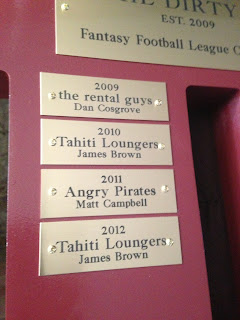 I started this football league in 2009 because it was the first Fall after I graduated from Umass and moved back to the Boston/Dedham area. I thought it was crazy-town that my core group of friends from "home"- who all loved and even played football- didn't play fantasy football. So I started our league, The Dirty D. I wanted 12 teams. So naturally I invited this core group of friends at the time: Adam, Dan, Paul, Bill, Campbell.

Once the 6 of us were on board, I expanded the search to fill out the league. Dan's younger and cooler brother Sean wanted in. Easy choice.

I thought Kait was both competent and competitive enough to play in the league (and I really just wanted her to play so she would be able to talk about fantasy football with me and know whats going on) so she got the invite. After that I asked her bro and her Dad, both avid NFL football watchers, if they wanted in. They did.

That brought us to 10 teams, but we struggled mightily to find 2 more players. With very little time before the draft, I invited college friends Caleb and Trevor to play in the League. They both accepted and we had our 12 players.


Let me break down the experience each manager brought to the table in 2009:

Dan: Had played in random public leagues for 2 or 3 years prior to 2009

Sean: Had played in the past for maybe 2 years

Campbell: Had been a first time player the previous year

Donny: Had never played fantasy football before but had some experience in fantasy baseball and hockey.

Caleb: Had played in the past for a number years (off and on for 7 or 8 years)

Trevor: Had played one or two seasons in the past

Having a team be auto drafted is pretty much my worst nightmare. It sucks. If you don't show up for the draft (conducted on line) Yahoo picks your team for you with a questionable strategy of taking the best player available (according to Yahoo pre-season ranks, which are established way too early) while also taking into consideration the positions that need to be filled. This probably wouldn't be the worst thing in the world except for the reason that once the "starting lineup" is filled, the computer will actually starting auto picking a kicker and defense in rounds 8 and 9, because technically those are starting positions.

Obviously anyone who has read this far knows that picking a kicker and defense that early is basically a kiss of death and wasted pick. Since we had so many n00bs in the league in 2009, we unfortunately didn't have full attendance at the draft. A couple owners missed the draft completely, while other missed the first few rounds while trying to log in. I remember drafting rookie Ray Rice that year in the NINTH ROUND of our draft. He was a consensus 5th rounder that year but because so many teams were picking defenses and kickers, players like Rice and other valuable "bench" guys were avail very late for those us who were aware of this debacle.

While I can't remember who exactly autodrafted, I have a good idea and it's fairly easy to tell when looking back at the draft results (which luckily, Yahoo keeps on file)

-I know Bill was absent for at least his first 2 picks. The computer selected Brian Westbrook for him at #5 overall. Westbrook's ADP that year (Average Draft Position) was 19.6. I think he had an injury, but Yahoo ranks didn't account for that. Bills 2nd round pick that year was Clinton Portis, who was also injured and ranked much lower than where Bill's computer picked him.

-I believe Trevor missed the entire draft or at least a large chunk of it.

-I know Mr. B was absent for his first 2 picks as well. He had technical difficulties but luckily both picks ended up being good. (Deangelo Williams and Chris Johnson (the year he had 2K yards!))

-I think most owners left the lobby and turned on auto draft after the first 8 or 9 rounds. Once you do that, the computer takes over and picks your kicker and defense right away.

-People were so new to the league that even some of the drafters in attendance started taking kickers in round 7. Donny used his 7th round selection on Stephen Ghostkowski.  Insane to think about nowadays. There's no way Donny would ever make that mistake again.


Look how gross this 9th round looks. This is the round I grabbed Ray Rice, who ended up as a top 10 running back. His ADP that year was 40.6. I grabbed him with the 102nd overall pick. Cue puking. 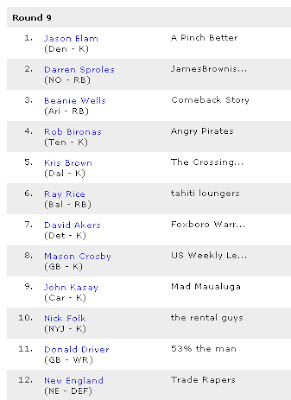 Anyway I need to move on. this draft is disgusting to look at. You can go back and look at the full results here.

Reason #3 More n00biness- No one making any moves


Not only do first time players absolutely suck at drafting, but they are usually pretty bad at making in-season moves as well. A newer owner will tend to stick to a drafted player much longer than they should. In fact, even after 4 seasons, we still have players who don't really make in-season moves and would rather just stick it out with their drafted players. You have to have a very, VERY good draft to be successful with this strategy. (See the bottom right points of: Kait's 2012 season and Sean's 2009 season.) Keeping up with weekly player news and being active on the waiver wire and free agent market is a MUST for serious players. You have to be consistently re-evaluating your roster and searching for better options that may be available. Football is a tough game... There's a lot of injuries and a lot of changes all the time.

I don't have any specific examples, but I remember in 2009 I would be able to pick up a newly-named NFL starting running back on Friday or Saturday with no problem. It was very easy  because so many good players were always available and so many members in the league never considered making any changes.

I had a theory that the more moves a manager made, the more points they end up scoring. Obviously this isn't an absolute truth, but I wanted to test my hypothesis. I took all the season from the 4 years we have played (2009-2012) and came up with the chart below. It's a simple scatter plot, with a calculated trendline that represents the mean. 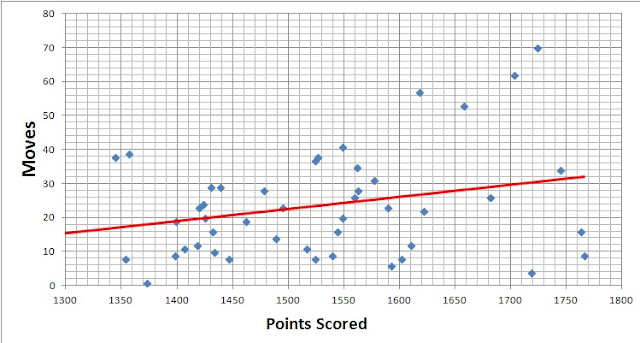 As you can see, my hypothesis was proven correct. That red line going from bottom left to top right basically means there is a strong correlation between number of moves and points scored. The more (legit) moves you make, the more points you are likely to score.

One thing I am proud of is the progression our league has made in this area. In 2012 there were more moves and transactions than ever before. In fact, the number of moves has (predictably) gone up each of the 4 years of the league.

As you can see, it is starting to level off... but I still predict the number of moves to rise again in 2013 as people continue to learn that complacency = death in fantasy football.

When you play head-to-head fantasy football, all you have to do is have your players score more than the other person and you get a victory. A low scoring win counts the same as a high scoring win. It's frustrating to lose with a high score and certainly lucky to win with a low score. Over time, these things tend to average out, but in one single season, a crappy team can have a good record with some good luck. And that's exactly what happened with Dan and the rental guys in 2009. 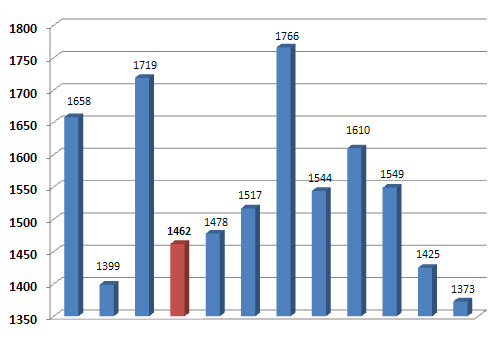 the rental guys are represented by the red bar. Dan's team scored 1462 points over the 14 regular season games. That's good for the 4th lowest total in the league. 9th out of 12.

Which begs the question, how did he win 9 games with such a low scoring team?

Well, I went back through the 2009 season for the answer and figured it out. Out of the 14 weeks, Dan's opponent scored lower than their average in a whopping 10 of those weeks!

This means if you played Dan, you were going to score lower than you normally do. This has nothing to do with actually facing Dan's team (this isn't real football where the 2 teams playing head to head influence how the other does) but just an amazing trend that contributed to Dan's success.


Even though the 2009 season was filled with rookie mistakes and crazy luck, Dan's team actually scored well in the playoffs. He got lucky as shit to get IN to the playoffs (top 4 in the league) but once week 15 rolled around, Dan's team was on fire and he put together back to back weeks that were deserving of wins. Here is how the playoffs shook out: 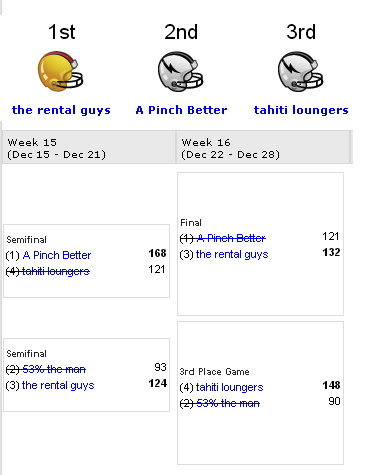 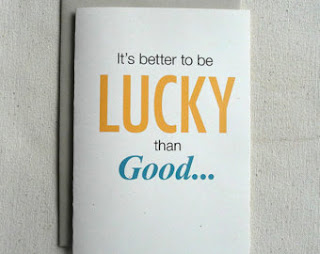