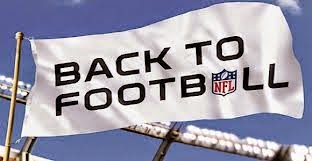 Finally. Mock Draft season is here. Football is here. Life is great.  The Dirty D is back for it's 6th season.... my team (Tahiti Loungers) will be looking to defend the title and go for the 3-peat.


We do have a new member of the league this year... one Michael Beckerman. Beckerman, the 15th owner in league history, is replacing Donny Burlone, aka comeback story. The other 11 members remain the same. Beckerman's team name: Mosey Machine. A+.


Unique to this year's draft is the bet that Adam lost last year. He foolishly thought a back up TE (Garrett Graham) would outscore a starting TE (Coby "Stud" Fleener) and the fact that the bet was even close is a joke. Now Adam has to pay up, to the tune of drafting a kicker in the first round!!!!!  Although I am confident in his ability to overcome this. After all, 30% of first round picks bust every year anyway.

Now, to the good stuff. The draft order. Just for reference, here are all the past draft orders in league history: 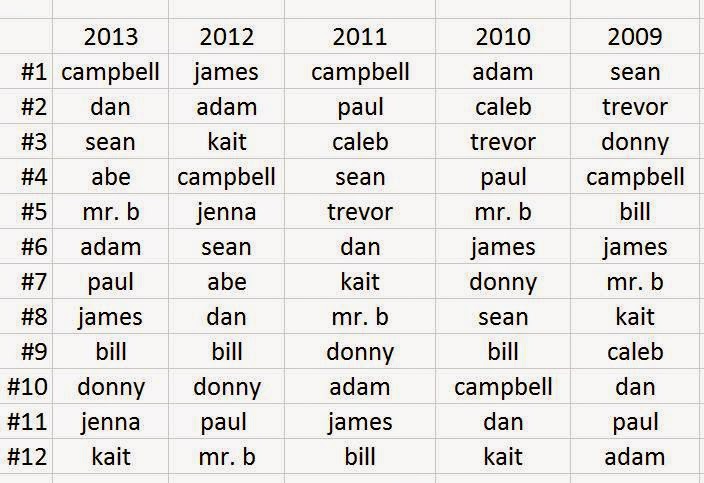 And now for this year's order. I of course had to have ADAM help determine his own fate. He was the owner who assigned a letter to each team.

SEAN was picked to arrange the letters in any random order. (FAG B LIKE HDC J)

Unbelievable. Kid gets the #1 pick overall for the 3rd time in 4 years. In 2011 he selected Ray Rice and won the league. Last year he picked AP and went 6-7 while missing the playoffs.  We'll see what happens this time around, but C Bunny certainly has a lot of experience drafting on the turn.

This is the second worst possible spot for Adam to land... picking #2 overall basically means he is missing out on the top 20 players, since he has to make a kicker selection in the first round. Ouch.

Abe did a solid job drafting from the 4 spot last year (Megatron-Lacy-Fitz-Gio his first 4 picks), this year he gets bumped up to the 3 hole. He's gotta be happy with the results.

Second year in a row Dan gets an upper-third pick... this year's selection is almost guaranteed to outperform Doug Martin from last year, who Dan selected #2 overall.

Paul needs all the help he can get. At this spot, he'll get to choose from some well known commodities in the first round.

Let's all just hope Bill makes it to the draft this year. Let the record show that Bill DID make the playoffs for the first time last year!! but it was a year he didn't draft his own team. Just saying. After 2 consecutive years picking at #9, Bill moves up to the #6 spot.

Nothing much to say here except prepare to get sniped in the even numbered rounds.

Boom. right where I wanted to be. The same spot I drafted out of last year (when I won the championship, in case anyone forgot). Hoping to not pick a dud like CJ Spiller this year.

I don't like Kait picking behind me. At all. Traditionally a good drafter, Kait siphons fantasy info off me every year. Basically she kinda knows about the players I like and can easily steal them from me. It’s happened before. CJ Spiller from 2 years ago. She knew I liked him, and sniped him right in front of me. Not happy about this position for personal reasons.

Jenna had a really nice season drafting out of the #11 spot last year, so this is familiar territory for her.

Total wild card. Since Beckerman is new to the league, I would think he likes the idea of picking so close to the turn. He can focus on his own team more while the middle team's sort of have to pay more attention to other people's picks.

Mr, B will probably assume he got the last pick cuz he's disconnected from the league. Not true, Mr. B. It was random! I swear!