The fantasy regular season is over. Here are the final standings for The Dirty D: 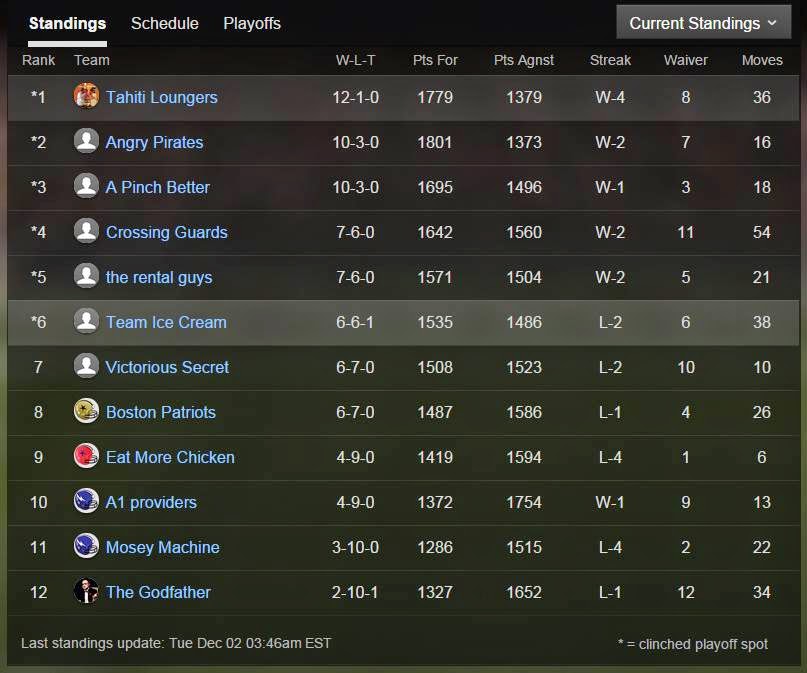 Woo Hoo! As you can see I crushed it this year, and I got pretty lucky along the way. Also something to note is Adam's (Team Ice Cream) playoff berth. Adam selected a kicker in the first round but battled though it and made the dance. Great job.

One of my favorite stats that Yahoo provides is your record if you played every team every week. Essentially this takes out the luck factor and is a good (better) indication on how teams fared this year:

Look at that... almost the exact order of the standings for the playoff teams


Lets also look at Avg points AGAINST. This is a brutal stat to lead in. It means you had the worst luck in the league this year.

As you can see most of the playoff teams had the lower points against. That's just how it works in fantasy. Angry Pirates scored the most points for and had the least against.


Here is the rank of point differential in the league this year:


Again, all the playoff teams finished positive, all the losers finished negative. Harmony.


Here are the 3 highest scores of the season:

187 Angry Pirates Week 7 vs The Godfather

61 The Godfather Week 6 vs Tahiti Loungers


Some other interesting things:

Tahiti Loungers, Angry Pirates, A Pinch Better all scored over 100 every week

the rental guys and Crossing Guards only scored under 100 once

Team totals from the past 2 weeks:


and... drum roll please.... my predictions for the playoffs as of right now: 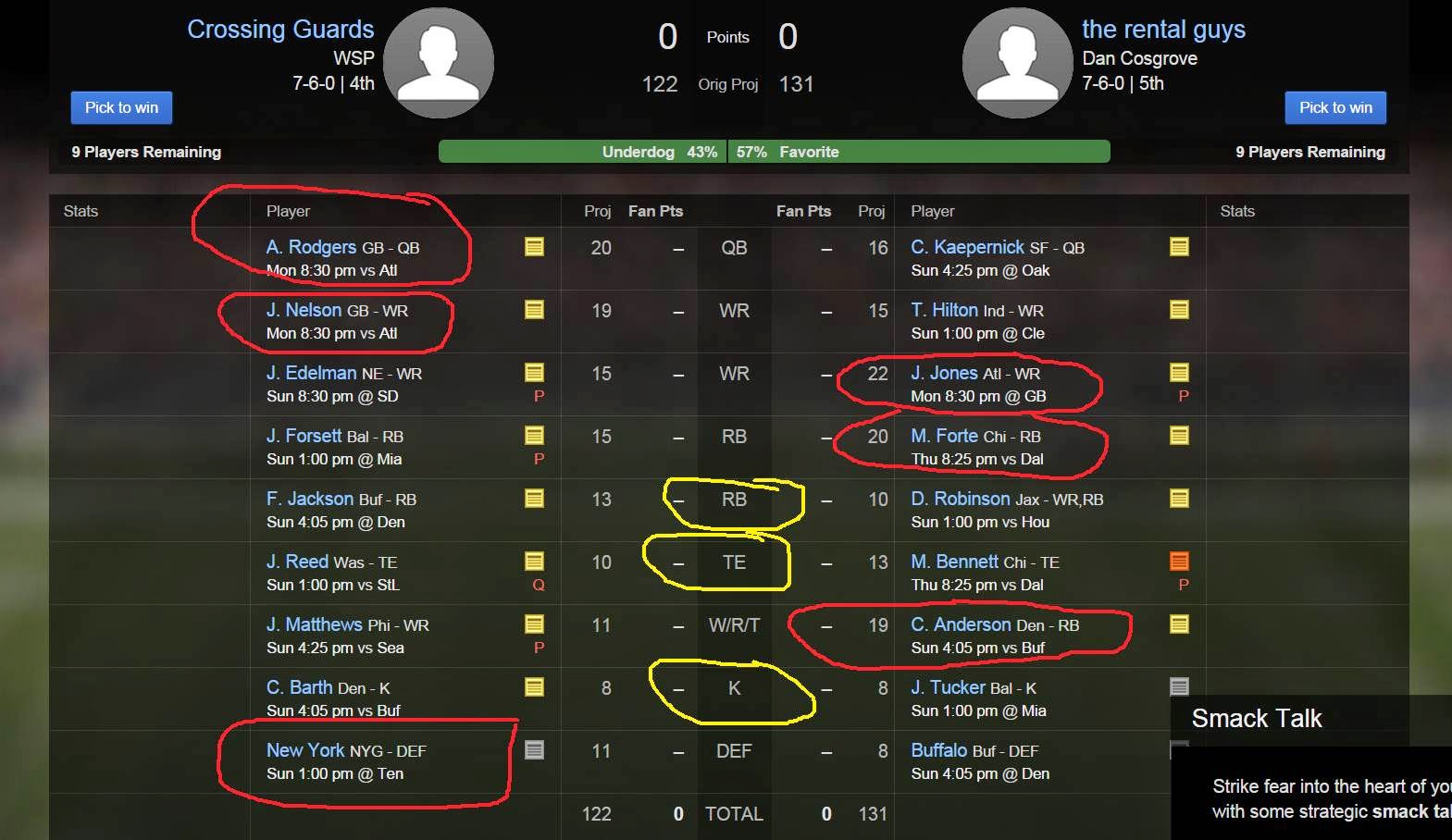 Crossing Guards vs the rental guys

This is going to be a good matchup. The Monday Night factor is in full swing here.... Dan will jump out to a huge lead and Bill will need his Packers death combo to deliver on MNF. The question is how many points will they need to lift Bill to victory? TY Hilton may have a tough game vs Joe Haden, and Kaepernick sucks. We'll see if Dan rolls with him or a different QB. Overall, I think the rental guys are too hot and will put up too many points for the Crossing Guards to come back from. I'll predict a victory for Dan. 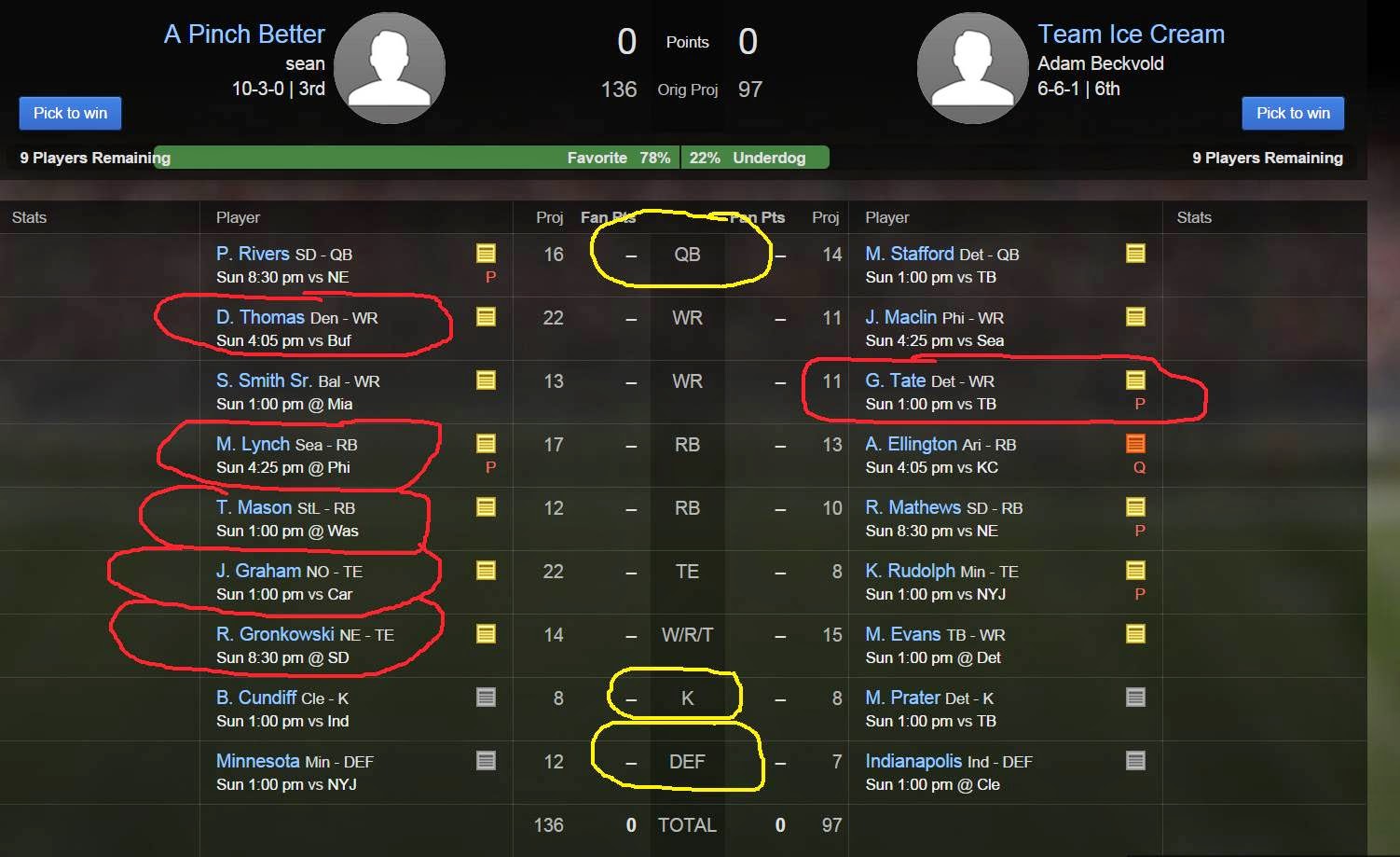 I think Adam is in a real tough spot this week vs Sean. The past 4 weeks Adam has scored 112. 116. 110, 115. He's probably going to be right around there again this week, this isn't the same team that had a beast stretch from Week 6-8, and that wont be good enough to beat Sean, who has a healthy Gronk ready to roll for the playoffs. The Stafford-Tate connection needs to really go off for Adam, and I don't know if that will happen. TB sucks so it could, but then again it could all go to Megatron too. Ultimately Sean just has too many studs for Adam to handle and I predict a fairly easy win for Sean.

In our league we re-seed after each round, so if Sean and Dan win as I predict, the semi finals will be:

At this point, anyone can win either of those matchups. Things change quickly in the NFL so it's tough to preidct the future 2 weeks out, but gun to my head I would have to favor my team vs Dan, and Campbells team vs Sean. This would set up a #1 vs #2 seed final and although I know it will be close and could go either way, I still prefer my roster to anyone elses (including Campbell) so..... SURPRISE... I'm predicting the 3peat from myself/ the Tahiti Loungers.


Good luck to all teams involved! Should be a fun 3 weeks.