The fantasy football Gods awarded me with my 3rd "D" after beating Adam and Team Ice Cream last Sunday. 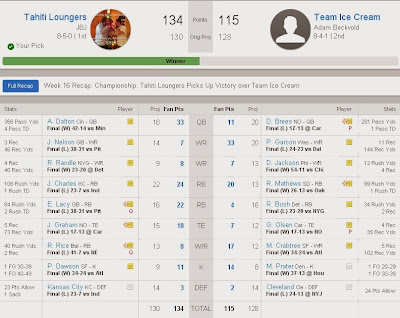 -Andy Dalton won me this championship. He was the 2nd best QB in Week 16, proving that a fantasy title CAN be won with a QBBC.

Over the past 4 weeks, here are the QB scoring leaders:


-Aaron Rodgers never played 1 week for me this year. I took a gamble trading for him back in November... he never came back. This mostly effected Jordy Nelson, who was a completely different fantasy receiver before and after Rodgers went down. Next year, I expect Nelson to come at a discount in drafts. He's a top 10 fantasy WR with Rodgers at the helm. Sticking with the Pack, Eddie Lacy was a stud all year. Easily the best trade I made this season, (K Thompkins for Lacy) I was paid off in a big time in Week 16 with a 2 TD performance from Lacy. AND he left the game early.

-My team actually scored the most points in Weeks 14, 15, AND 16. That means no matter who I played in any week, I would have won the D. This normally isn't the case, but it was this year, and I am happy knowing that I clearly had the best team at the end of the season. Over those 3 weeks my team averaged 172 points per week. In Week 15, I set a new franchise record (and 2nd highest score in League history) with 203 points. And it feels great because through all 33 weeks I had to spot start guys like Rod Streater, Jordan Todman, and of course my QBBC. I definitely earned/deserve this D.

-Congrats to Jenna and her team Eat More Chicken for 3rd place. No #sophomoreslump here!

-Jamaal Charles obv was a monster contributor to this title. You can even argue that I actually won the big trade with Adam where I got Rodgers and Charles, simply because Charles was such a beast down the stretch.

-I swung and missed on Rueben Randle. I love the guy's talent but he didn't come through for me. Next year I expect a rebound from Eli and the Giants so Randle will be on my radar.

-Adam has ALWAYS loved Reggie Bush. BUT... that was before Reggie cost Adam a "D."  Bush fumbled in the first half and dropped a big pass in the 2nd half, and was benched for Joique Bell for most of the game. Joique actually had a career high in carries, and even the 3rd string RB came in for a TD over Bush in the second half.... Not that anyone would have ever suggested this move... but if Adam had ever played Joique over Bush, he would have won  the matchup 142-134. Ouchy.

-Ryan Mathews is a beast. If you've been burned by him in the past, ( I have!) You should probably get over it and seriously think about drafting this guy next year. He's young, talented, and maybe he found a way to stay healthy. Finished as the #16 RB in our league this year, and keep in mind there was a long stretch where Woodhead was stealing all of the playing time.

-Streaming Defenses is King. I ended up rolling with the KC defense in Week 16... and they screwed me over by scoring just 3 points. I was THIS close to playing the Rams DST or the Lions DST, both of which scored much much better. To be fair, Adams streaming defense, the Browns, actually only scored 2 points. The Jets somehow played a great home game and didn't turn the ball over. Still... at the beginning of the week, Adam had the chance to gram the Lions or Rams off waivers, but passed. Lets take my annual look at how my streaming defenses fared vs the top units in the league.

Top defenses in the league:

And a week by week breakdown of how my streaming D worked:

That's a total of 195 points, which would be the 4th highest on the list. I do realize that KC in week 14 kinda of throws this off a bit... but I think the point is proven once again. If you don't draft an elite defense (which you will have to spend a 7th or 8th round pick on) you are much better off going with streaming defenses.

Also, The KC and Carolina defenses were both available after the draft. I even used Carolina in Week 2 and then dropped them. So when you are drafting next year... I will once again suggest on waiting for a Defense. Instead, use the draft pick to select someone like... I don't know... Josh Gordon?

-I didn't own Josh Gordon in this league, but I HAVE to mention him. He finished our league AHEAD OF CALVIN JOHNSON. Oh, and did anyone forget Gordon was suspended for the first 2 games? Yea that right. That makes Gordon the #1 WR in fantasy this year, and it's not even that close. I owned Gordon on 4 of my 5 teams... and the only team I DIDN'T own him on, I won the championship. Crazy fantasy football...

-I also have to mention Jimmy Graham here. I took a chance on him with an early draft pick... something I've never really done before... and it paid of in a huge way. Graham carried my team the first half of the season, and although his pace was slowed down in the 2nd half... he still finished so far ahead of the #2 TE that Graham should DEFINITELY be a 1st round pick next year in PPR drafts... and you can probably make a case for him as the #1 overall pick. He finished 90 points ahead of the #2 TE (Julius Thomas).. outscoring him 295-205. That's a MONSTER advantage.

Looking back now, its clear that Adam (Team Ice Cream) and Sean (A Pinch Better) probably had the 2 best drafts.

Look at the names on that list. From pick-ups alone you could possibly be starting:

That's a nasty lineup. Point here: Makes moves people. Jenna, Kait, and C Bunny all should have been more active on the wire. Jenna's team would have won the ship (like Kait in 2011) if she paid a little bit more attention/ was more active.

Here are the final 2013 scoring averages Weeks 1-16 (the number that goes in the record books) for every team: 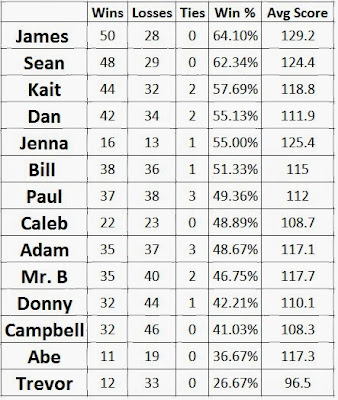