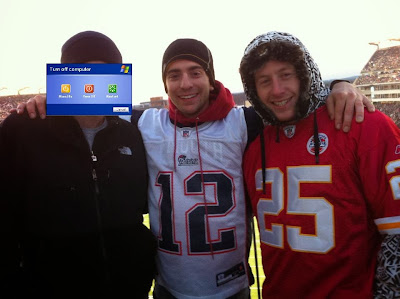 Week 15 was a wild one...after the highest scoring week in NFL history (again), my team actually came through in the clutch. Adam also won to set up a re-match of the 2010 Championship.

I don't want to spend too much time on Week 15, but I HAVE to note my team's performance (especially after I wrote a blog last week LOL-ing at my lineup). 203 points is the 2nd highest score in League History... and it was done with a roster that included Ryan Tannehill, Jordan Todman, and Rod Streater. Jamaal Charles also dropped 65 point of his own.... and Jordy scored his first TD since ARod went down. It's been 2 consecutive weeks for my team performing its best all year... Great timing! (especially because it was just 3 weeks ago I had my lowest output of the year in Week 13.)   On the other side of the semi's, Adam was able to hold off a monster comeback effort from Justin Tucker. #AutoBill loses for the first time since before Halloween and his league record tying 6 game win streak comes to an end. D Jax led Adams team with over 40 points, and even in a "bad" game Drew Brees still tossed up 20 points.

Now, lets move on to the championship match!!

Last year I thought Adam and I had the 2 best teams. Adam lost in the semi's but this year he took care of business and we have our re match from 2010.

Just for fun lets look at every matchup Adam and I have had head to head in League history:

So as you can see I've dominated with a 6-2 record and haven't lost to Adam since before my first Title in 2010.

Unfortunately for me, this literally means nothing for this upcoming week. This isn't real football, I'm not actually playing Adam. My roster is competing indirectly with his roster.

Overall, that's about as close as it gets, folks. Something that DOES favor me is that Adams team was strong at the beginning of the year and since Week 7 I've only been outscored by Adam one time (to go along with one tie.)

Both of these teams look a lot different now than they did toward the beginning of the season. In fact, just prior to Week 11 Adam and I made the following trade:


This obviously severely altered the look of both these teams. I traded for Rodgers under the assumption he would be back by now...as of this writing it looks like a true coin flip 50/50 situation on whether he will play in Week 16 or not.

Obviously the last 2 weeks have helped me pull way ahead of Adam here. In fact, with those 2 monstrous weeks I took over the points lead (played 1 extra game than Adam and Jenna) but also the average weekly score in 2013.

In case anyone is wondering, those numbers represent the 2 best in the league all year.

Those are pretty much the 4 best teams. 2013 was a good year to prove my theory that in our league, success can partially be estimated by activity.

Anyway, using almost any metric you want, it's clear these have been the 2 top teams this year and I'm looking forward to the rematch!!!


I will do an in-depth player by player matchup and post it later this week. No Thursday Night game this week (Thank God) so there's plenty of time.