Another regular season is in the books for the Dirty D... and like most years in the past, 7 wins is what it took to get in the playoffs this year. Here is a snapshot of the final regular season  league standings: 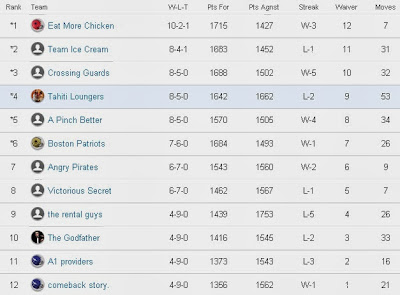 -Congrats to Jenna for winning the regular season crown and also scoring the most points. This is also the first time she's qualified for the playoffs.

-Congrats to #AutoBill for finally making the playoffs for the first time in 5 years.

-Dan misses the playoffs for the first time. Luck finally caught up to him... 1753 points against was 91 more points against than the next unluckiest team. He ended the season on a 5 game losing streak

and now, avg weekly points for:

-Just to re-enforce a point I made in the pre-season:

^ As has been the case every year... the more moves you make the more likely you are to make the playoffs. This doesn't necessarily apply to other leagues but in ours... its clear.


Updated # of playoff appearances through 5 years:


I also want to note Angry Pirate's record breaking performance in Week 13. Although it was a meaning less game, C Bunny beat the league record by 30 points and a team finally broke 200 for the first time ever: 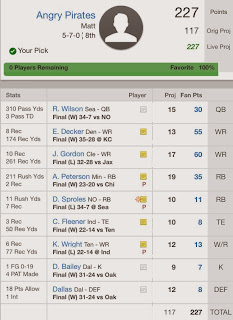 Lastly, here are the top scorers at each position: 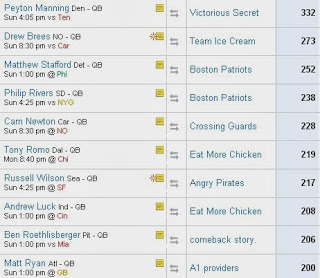 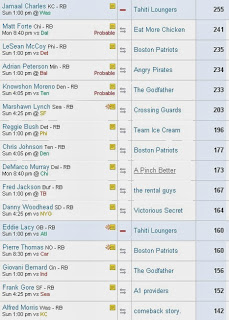 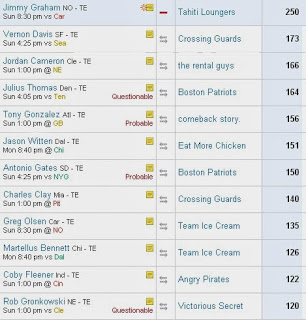 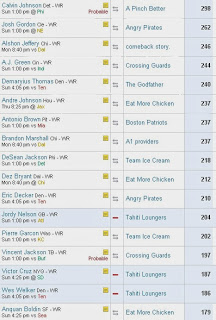