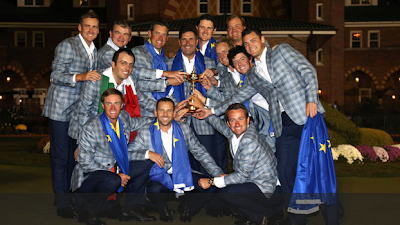 Well, that sucked. Team Europe headed into Sunday's individual pairings down 10-4, the same exact margin the American's faced in 1999 at The Country Club in Brookline. The pulled off the "Miracle at Medinah" late in the afternoon after a series of events that silenced the raucous home crowd of USA.

To get the mushy bull-shit out of the way I'll quickly mention that Team Europe was outwardly playing for their late fallen Ryder Cup hero- Seve Ballestros. They had his silhouette on their sleeves, and clearly used it as motivation to get the W.

Donald took control of this match early and never looked back. Bubba made a late push but came up short. The Euros stacked their lineup with their 5 best players in the first 5 matches, clearly a winning strategy since they WON ALL FIVE and took an 11-10 lead. 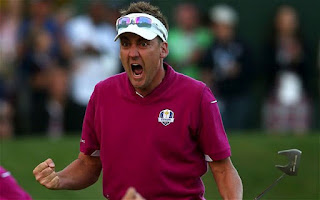 We know Poulter is a gamer. My friend Bill said it perfectly- Poulter's the guy you hate on the other team but love on your own. Brad Marchand, if you will. Anyway Webb started great but Poulter would not be denied and played exceptional golf down the stretch to win the match. I think it was a tweet from Trey Wingo but he said something along the lines of "Every 2 years, Poulter's the best player in the world, right on cue"

What a matchup. Rory was actually late to the course- he was confused about his tee time and almost missed the Tee. Unfortunately he made it, and like he said it may actually have been an advantage becuase he didn't have time to over think anything. If Bradley were to have pulled off this win, he would have capped off the greatest performance in Ryder Cup history, beating the #1 player in the world and going undefeated. That didn't happen. Rory ended Bradley's incredible run. After the victory, Rory took a bow to the crowd and that's the moment I started worrying about the American lead. I wish McIlroy was American SO BAD. He's such a boss.

This was a great back and forth matchup where the lead changed hand a few different times. Phil ended up losing on great green-play by Rose toward the end. Mikelson was back down to earth today after playing with Bradley all week. Those 2 guys clearly fed off each other and both desperately could have used the other yesterday. Phil somehow thought it was funny or cool that he lost am I'm sure he catching a ton of shit for his reaction to Rose' winning putt:

This was a blow out. Lawrie won 5 & 4 and Snedeker never had a chance. I knew this whole week would be tough for Snedeker, he was so high after his FedEx cup win just last week and his 2012 Ryder cup record was an ugly 1-3 record.

Finally a W for the Americans. Johnson played very good on Sunday, maybe USA's best player, and he silenced the Ryder Cup rookie Colsaerts with a clean victory, never trailing. It was nice to see someone actually hold a lead and close out their match.

Apparently we should only have selected golfers with the last name Johnson. Zach handled McDowell, who had a rough week, pretty well. ZJ never trailed and like DJ, he actually had the stones to close out his match.


At this point the score was 12-9, USA leading. Needing 2 1/2 points to retain the cup, USA was still looking good. 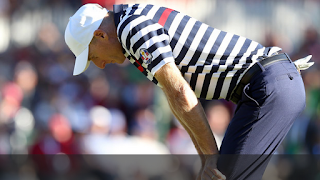 Here's where the US lost it. Furyk, arguably USA's strongest player in this format, blew it hard. On the 17th tee Furyk was  1 up. He proceeded to lose the last 2 holes and couldn't even salvage half a point. This was bad. When Garcia won this match (with a makeable par miss by Furyk on 18) I knew team USA's bus was approaching Choke-City. Also, Furyk was a captain's choice for the team so DLIII might catch heat for this one.

The last full point the Americans would earn came from Dufner. He went wire-to-wire and never trailed in his match. It was nice to see this rookie come through for the Americans... Hopefully next Ryder Cup Dufner makes the team and builds on this performance. This match was rarely showed on TV so I didn't get to see much and also I don't now if I technically even saw Peter Hanson all weekend.

This was a blood bath. Kooch was manhandled by Westwood down the stretch, losing the last 3 holes. I feel bad because I think Kooch lipped out like 4 times yesterday but no excuses. Westwood played better than earlier in the week and when that guy is no top of his game, he is tough to beat.

Ahhhh. Steve Stricker. Captain's pick. Winless in the tourny. Ouch. The match was all square going into 17 and at this point in time, the US needed 1 win and 1 tie in the last 2 matches. With Tiger as our anchor, Stricker only needed to halve the last 2 holes with Kaymer to let Tiger win it. What happened? Stricker lost 17 and had a poor effort on 18. Kaymer sunk the 6 foot putt to retain the cup for Europe.

Well Molinari beat Tiger on Sunday LAST Ryder cup, so this re-match could have been great. As I mentioned Kaymer won it for the Euros on the 18th green while Woods and Molinari were in the fairway waiting to hit their approach shots. Even though Euro had won, I guess they played out the last hole and halved the match, so Tiger also went winless all week. 0-3-1. That brings Tiger's all time Ryder cup record to 13-17-3. That's so gross.  I wanted SO BADLY for the Ryder Cup to come down to Tiger on 17 or 18, but unfortunately we blew it before Woods had a shot. I'm confident he would have came through with the Cup on the line. Too bad we never got to see it.

In Conclusion, Team Europe deserved the Win for their dominating performance on Sunday. They won 8 of the first 11 matches to bury the Americans. It was an incredibly deflating day for the Medinah crowd- they deserved better. This tournament was so, so great. I love how golf can be a team-game, and even if you are not a golfer or golf fan I believe you could have tuned in all weekend and been instantly captivated. 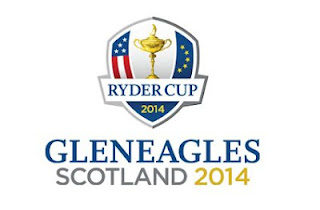 PS- Anyone wanna go crazy and make the trip to Scotland in 2014 for the Ryder Cup? I'm in. And our American team should be very strong in 2014... we had a lot of younger guys gain some very valuable experience in this worst collapse of all time.