As it has been all season, the competition for the top spot in my playoff power ranks comes down to a close call between the top 2 teams. Adam and I both earned byes in the first round and each only need to win 2 games to win the championship. I finished with a 10-3 record while Adam finished 8-5, although he DID have more points scored.  Am I upset I didn’t win the scoring title this year? Yes.  Am I surprised? Sort of. I knew the only team that had a chance to beat me was Adam, and we had been going back and forth all season. Each week it seemed like one or the other of us would reclaim the points lead. How did I lose in the end? Well the last 3 weeks of the season Adam outscored me 452-374. While I am not happy this happened, I cannot say I’m not surprised. Continuing a trend that hurt me all year, I traded FOR a few studs that had yet to have their bye. I knew I could afford to bench these stars because of my position in the standings. For example, I traded FOR T rich on his bye week and had to leave him on my bench . I also traded for AP and Percy on their bye weeks. (Don’t get me started about Percy, who suffered a season ending injury before I traded for him, but no one knew it would be so serious. Lame.) Anyway my point is even though I finished 2nd in the total points for, I think a large part of that was the trading trend I set all season of acquiring a stud by convincing the other owner they could not afford to bench their stud for the bye week, but I could. To further illustrate my point, ALL these guys were on my roster during THEIR bye week, so even though my team was laced with studs every week I couldn't necessarily start them.

Comparably, here are the bye weeks Adam’s team had to deal with:

As you can see my team was severely limited in Weeks 9, 10, and 11 when I lost most of my ground to Adam. This is because I took on a lot of “risk” by trading for guys during their bye weeks. Adam did a nice job of avoiding bye weeks with some of his major players, most notably Ray Rice.
Anyway let’s do some more comparison between the top 2 teams. 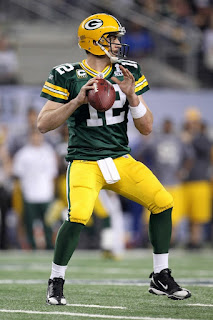 QB- Aaron Rodgers VS RG3
It’s no surprise that Rodgers is amongst the fantasy leaders at QB this season, although he has cooled down as of late. Conversely, RG3 has heated up in the past few weeks and has continued his dominant rookie season. Look, both these guys are studs. Both have high ceilings and both have very low floors. It’s nearly impossible to give an advantage to either team here, but gun to my head I’ll take Rodgers. Let’s not forget RG3 is still a rookie (and there is still 25% of the NFL season remaining, traditionally about the time rookie’s start to hit the “rookie wall”) and because of his running ability, he is at a much higher risk of injury than Rodgers.  In week 15 & 16 RG3 plays @CLE and @PHI while Rodgers plays @CHI and vsTEN.  I am encouraged about the news of Brian Urlacher missing the next few Bears games… I’ll admit that even I was a little nervous with Rodgers vs CHI in week 15 because back in week 2 he only put up 10 fantasy points but I see NO WAY that happens again, especially with the loss of Brian Urlacher. 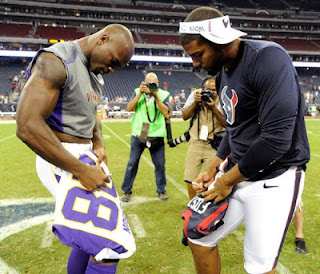 AP and Arian Foster are 1 and 1a when it comes to fantasy running backs (no disrespect to Ray Rice, who in my opinion is a shade behind these 2). The fact that I have BOTH monsters on my team is crazy. I am a little worried about Foster being sat in Week 16 due to early clinching scenarios for the Texans, but in case that happens I DO have Ben Tate who should fill in nicely and probably perform equal to Foster. Worst case scenario is the Texans don’t officially clinch and they split carries between the Foster and Tate. AP is a stud and the leading fantasy RB this year. If you take out the 1st 2 weeks of the season he is ahead of everyone by a wide margin. Doug Martin has been a very, very nice addition for Adam. Basically I traded him Dougie Fresh and $$ sandwiches for Trent Richardson. I then flipped Trent to get AP. Of course, the week I traded Martin he blew up for 67 fantasy points and that performance alone pretty much won Adam the scoring total. JC in KC is a dynamic back who is reliable. He just is. He can get only 12 touches and turn it into 150 yards easily. The only knock on JC is he plays is such a bad offense that who knows if he can get it going. Sometimes the coach doesn’t get him the ball and he gets cold on the sideline.  I don’t exoect that to happen, but I am encouraged that Peyton Hillis gets all the goal line looks. JC’s fantasy value is somewhat limited because of the low TD total, but it only takes one play for him to bust a 70 yard TD. Demarco Murray is the X factor here. He has been out for weeks but recently made a return. This guy is a game changer and if he is healthy come Week 15 and 16, Adam is going to feast. Overall, though, it would be irresponsible to not give my team the advantage at RB. It isn’t a large one, but I’ll go to war with Foster and AP anytime. 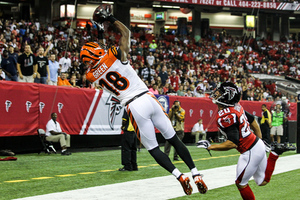 Another close, close position battle. Roddy White and Victor Cruz are the same player. Both see a lot of volume of passes, both have HUGE games sometimes, and both are go to receivers in high powered offenses. AJ Green and Demaryious Thomas are also comparable. Green has the better numbers thus far, he was a TD machine the first 10 weeks of the season. Green has slowed down a bit as of late, I don’t necessarily think that will keep up, but it is something to keep an eye on. A couple weeks ago I know the Raiders just refused to get beat by him and had him double teamed in the redzone. They shut him down. (Well, kinda. They held him to 3 catches and 0 TDs but he DID catch a long gainer for 111 yards total.) On the other hand you have Demaryious Thomas. This guy is an animal and it’s no surprise that he has continued to get better as the season grows and Peyton Manning gets more comfortable with him. At the beginning of the season Decker and Thomas were splitting the looks from Manning, but over the past month it’s been all Thomas all the time.  If you agree with me and think Roddy/Thomas cancel out Cruz/Green, then the deciding players in this section are Josh Gordon vs Stevie Johnson/Danario Alexander. I SHOULD have Percy listed here too but that tragedy can be saved for another day. I like Gordon a lot but I also like Alexander. Both of these guys were mid-season pick ups and Gordon has gone from practice squad to deep-threat starter in a matter of weeks. The confidence Brandon Weeden has in him make me feel great about owning and starting him. Alexander is the new go-to guy for Philip Rivers. He kinda came out of nowhere so judos for Adam for picking him up. I’m not a huge fan of Stevie Johnson so I’m not even going to waste time and write about him. Basically after this entire paragraph I can’t make up my mind about which WR trio I would rather have for the playoffs. My guys have slightly better matchups, but all these guys are matchup proof so I’m calling it dead even. 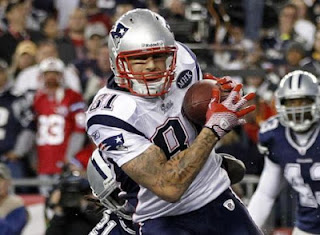 TE- Aaron Hernandez vs Brandon Meyers
This one is probably closer than most people think, Brandon Meyers is an integral part of the Raiders offense. He had a ridiculous performance recently, although 80% of his 35 points last week came on a trash time drive at the very end. Yes, that still counts, but without that drive he played like shit. Aaron Hernandez is going to be leaned on heavily through the next few weeks, especially because Gronk is out with an injury. I expect Hernandez to put up huge numbers, especially with the tough run Defenses the Pats are about to face. Jimmy Graham is the ONLY tight end I would rather have than Hernandez. T Gonz is close but I’ll take Hernandez. Clear advantage for me here over Adam.

Anyway when it’s all said and done both these teams are deserving of a Fantasy Championship. It wouldn’t surprise me if Adam beat me or if I beat Adam, I just hope we get the chance to face off against each other in a re-match of the 2010 Championship. These have clearly been the best 2 teams all season, I made a note of it back in Week 2 of my power ranks that I thought Adam and my team were head and shoulders above everyone else and I was right.
Posted by JB at 5:53 PM