Braves fan weighs in on Jeter

My Farewell to the Kid form Kalamazoo
By: Chad DeNardis

First off, I would like to preface this rant by saying that I AM NOT A DEREK JETER HATER. I actually respect and root for Jeter. He is a class act and very good good baseball player (which is saying a lot coming from me because I believe the Yankees are the anti-Christ and my most hated player/team/anything in all of sports. They ruined baseball forever). But more importantly than that, he is maybe the greatest cocksman of my lifetime: 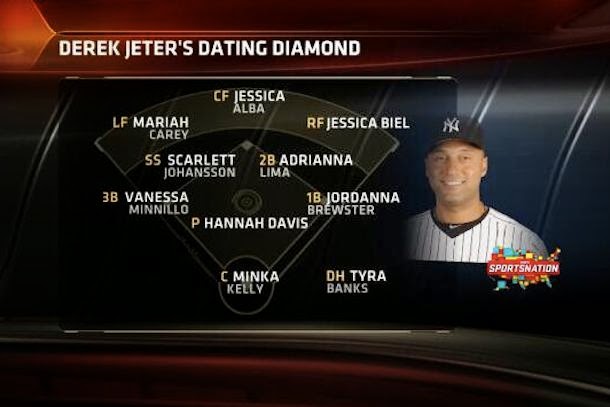 My main reason for my hatred of the DJ ball washing that has gone on all season is strictly statistic based. This type of dick sucking should never happen for any athlete. No athlete is bigger than the team. But if we are going to have to suffer through it, it should be reserved for elitely talented players. And his statistics just aren't elite. At all.  We have seen wayyy better players come and go in our lifetime without this type of worship. Jeter supporters will base their counter arguments on "the it factor" and "intangibles" and say "oh, the captain led the beloved Yankees to 5 World Series". My response: who gives a flying fuck. Baseball isn't a sport about championships. It's a sport based solely on numbers and statistics. It is unlike any other team sport in this way. Fuck, if you look at the list of Sports Illustrated "50 greatest baseball players of all time" 28 of them never won a World Series and 19 of them never even took a swing or threw a pitch in October.  A player can bat 1000 and hit 400 homers in a season and if his pitching staff and supporting cast is a bucket off assholes he can end up with a losing record and just 400 RBI. I know it's next to impossibile, but it can technically be done.

When people debate the best football players, it's based strongly upon Super Bowls.  Brady or Peyton? Peyton has better numbers but chokes in the playoffs...NBA players greatness? Jordan will be the best until Lebron and Kobe have more titles, even though LBJ has better stats. Baseball? No one ever mentions how many World Series Babe Ruth or Willie Mays won, But every baseball fan can tell you the number of home runs Hank Aaron hit, how many games Joe D's hit streak was, who the last player to hit .400 was, and what 300 wins means for a pitcher.

Now back to his statistics.  A .309 career hitter as a shortstop. A solid average, but we have seen so many players with higher batting averages than that. Among them, that are currently playing or have retired in our generation: Manny Ramirez, Edgar Martinez, Mike Piazza, Tony Gwynn, Miguel Cabrera, Nomar Garciaparra, Larry Walker, Todd Helton, Ichiro, Pujols, Vlad Guerrero, and Wade Boggs. Out of this list of 13 players, the only ones with less power than Jeter and his dog shit 259 career home runs are Ichiro, Boggs and Gwynn. Ichiro may be the best contact hitter we have ever seen and Boggs and Gwynn batted .338 and .336 for their careers respectively and both won more good gloves than DJ. Then there's the argument that shortstop isn't traditionally a position measured by offense. Although historically true, during much of Jeter's career it wasn't. We had the era of A-rod, Nomar, and Miggy Tejada in the late 90s/early 2000s. Now we have the era of Tulo and JJ Hardy, short stops who can mash.

Then there the people who will say, oh he's the captain of the greatest franchise in sports.  The shortstop of the New York fucking Yankees. My response to this: who gives a fuck. So what , you played in NY, big fucking deal. No one should be commended for the city they play in or what uniform they put on. Especially when it's a great franchise. If you're going to commend players for playing on a team for decades, then commend Tony Gwynn and Craig Biggio for spending their Hall of Fame careers on dog shit teams that always sucked. They remained loyal to those organizations and those fans even though they rarely sniffed the post season.

Also, let's not forget the people who claim that he played his entire career at shortstop, and didn't move positions like Ripken, ARod, and some others. Well to those people, you are an embarrassment to sports. He sucked at shortstop every year since 2006. Statically, the WORST defensive shortstop in baseball every single year since then. And it's not even close. What he should have done is moved positions to better the team.


Farewell to El Capitan, I hope you ride off gloriously into the sunset and continue to bang chicks that I pound the pud over on a nightly basis.