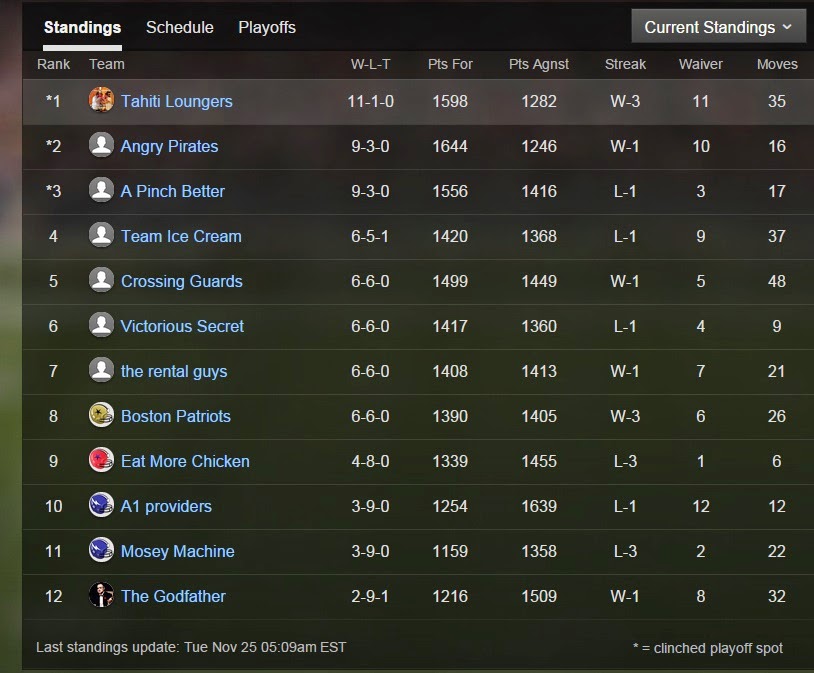 Tahiti Loungers- Has clinched the #1 Seed and 1st round BYE.

Angry Pirates- Has clinched a playoff spot, and will clinch the #2 seed and BYE with a win in Week 13 (vs Mosey Machine) OR if Sean loses to Jenna.

A Pinch Better- Has clinched a playoff berth already. Can secure the #2 seed and a BYE with a win combined with a Loss for Campbell. Sean is currently 88 points behind Campbell in points scored.

Team Ice Cream- Adam has almost clinched a playoff spot. For Adam NOT to make the playoffs, all of this would have to happen:

Adam loses to Paul
James loses to Mr. B
Abe loses to Bill
Dan and Kait do not tie.

If all that happens, without a change point totals, you are looking at :

So to review, Adam is IN with a WIN, OR a loss by Mr B or a loss by Bill. And Adam's total points do not matter, as he has a tie and is half a game ahead/behind of everyone else.


Crossing Guards- Bill will clinch a playoff spot with a win over The Godfather OR if Mr. B loses to James.

If Bill loses, and Mr. B wins, the last playoff spot will come down to a points tiebreaker between BILL and the loser of the KAIT/DAN matchup. Bill has a pretty large lead on both of them (+72 over Kait, +81 over Dan)... so it is unlikely Bill will miss the playoffs.


the rental guys & Victorious Secret- Kait and Dan are playing head to head. The winner of the matchup is in the playoffs, the loser is essentially out.  For the loser of this matchup to get in the playoffs,  Mr. B would have to lose to James AND this loser would have to catch up to Bill in points, and as mentioned, he currently holds a commanding lead over both Kait (+72) and Dan (+81). So again, its basically WIN and you're IN,  LOSE and you're OUT.


Boston Patriots- Mr. B is currently last out of the four 6-6 teams due to a low point total. If he loses to James this week, he is out. He would be IN the playoffs with:


EVERYONE ELSE- Is already eliminated.