Even though the season isn't over, and a lot still has to be played out, its a solid time to look back on fantasy football trades and see if/how they are panning out. I made 7 trades this year, which is low for me, lets take a look at them one by one. 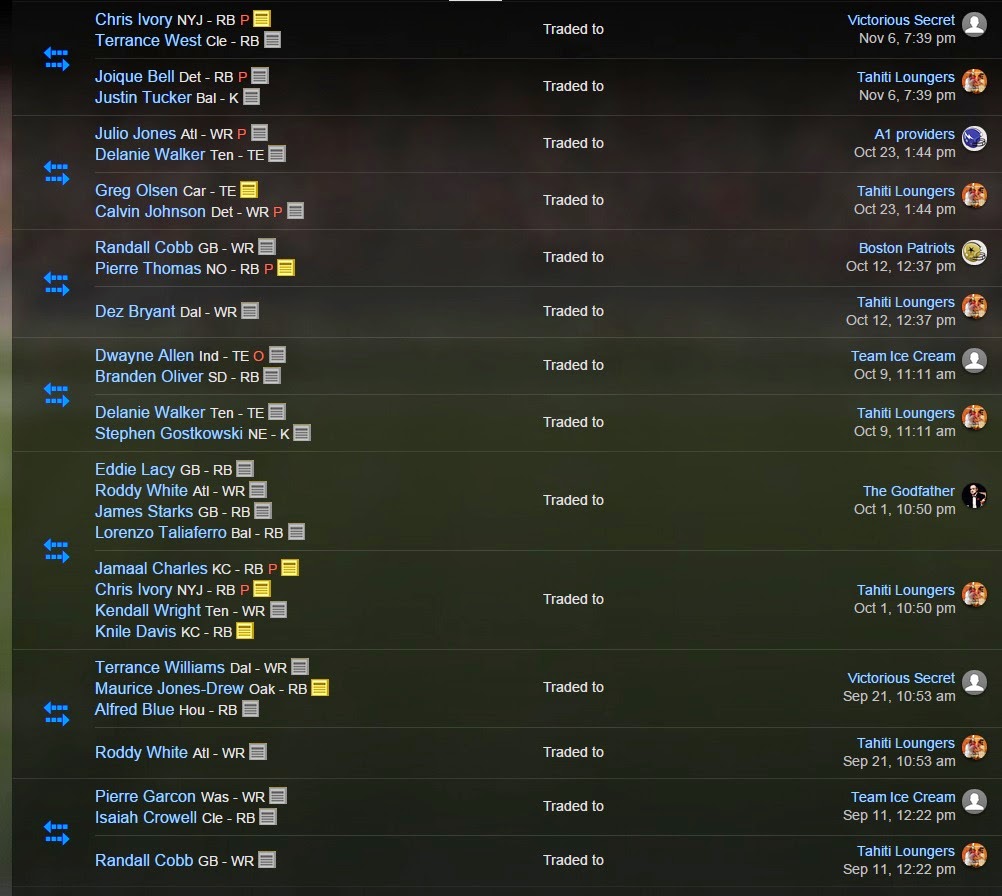 A+ trade for me here. Probably the best trade I made all year.... Garcon has SUCKED (but he was goo din week 1 before this trade)  and Cobb is a beast. Crowell is solid, but only recently has he really gained a lot of value. Adam moved him well before this so he didn't really help Adam too much.

Fairly even here. Roddy has been the best player of the group, but T Williams had a couple nice weeks for Kait while she was thin at WR and Alfred Blue has been a critical back up for her Arian Foster. This trade was made on a Sunday morning when Foster was made inactive. If Kait had been paying attention she could have used a waiver on Blue and would not have been forced to trade Roddy. This is a common theme with Kait and other owners in our league who every year, are forced to lose talent in the trade market because the are not active on the waiver wire. Alfred Blue is a prime example of this.

This was a monster trade that caused controversy. Other owners saying its insanely lopsided (In my favor.) Well, its time to judge the trade so lets break it down. As a note, I was also given Kendall Wright as a throw in. I dropped him immediately as I never wanted him and he wasn't discussed in trade talks.


Knile Davis and James Starks were both traded as handcuffs to their superior teammate. Both guys have been solid on their own, but not startable. Purely handcuffs here (2 of the very best handcuffs)

Antoher reason why Abe made this trade was because he was facing me the next week. Charles was on a BYE. Abe really needed to win, so a side benefit of this trade was Abe giving me Charles during his bye week so I couldn't play him vs Abe. SO pre trade I went from starting Lacy to starting a back up for this week.

Anyway, I love this trade for both teams. Abe took a risk by trading Charles for Lacy, who had been struggling, and it paid off big time. Roddy White easily makes this trade favor Abe, ALTHOUGH I would likely still do this again if I could go back in time. I still prefer Charles to Lacy in the playoffs, but maybe I should have waited a few more weeks to get full value from Lacy.

Woof. It's not that I wouldn't do this trade again, but I sold low on these guys. EVERYONE PAY ATTENTION. This is why you makes trades with me. I needed to make roster space and wanted to upgrade my kicker so I made the swap with Adam. Oliver was turned into JEREMY MACLIN and Dwayne Allen scores like 5 TDs in a row after I made this trade. Real solid move for Adam. And it allowed em to upgrade my TE and acquire the best kicker.

Pretty simple trade here... I viewed (and still view) Dez as an upgrade over Cobb. I had extra RB depth that MR. B NEEDED so he made the trade. Solid move for both teams. Just for fun, since the trade:

The reason Paul made this trade was because Megatron was injured at the time, and not expected to play for 3 more weeks. Paul couldn't afford to hold such a valuable player on his bench, so he made a trade for Julio Jones, who obviously has enormous upside. Julio didnt really perform as well as Paul expected, and Delanie Walker suffered a concussion shortly after the trade. So it wasnt a good one for Paul, but then again if he didnt make any move at all it wouldnt have been good either. SIince the trade:

So when you look at how this panned out.... Paul was kinda doomed from the start but he definetly didn't hurt himself with this trade. I, on the other hand, lost a bunch of points with Olsen not really performing near as well as the beginning of the season. However, moving forward in the playoffs, now Im starting Megatron and that is pretty good. I like him over Julio for the playoffs so ultimately, I like the trade.

Right time, right place for Kait here. It was Thursday night, I needed to drop or trade West and instead of losing him completely, I acquired a kicker for the week. Ive since dropped Tucker and J Bell has kind of sucked, so really this trade was kinda gross.

Anyway, now everyone can see how I built such a beast team... it was a combo of good drafting (Leveon Bell, Andrew Luck, Josh Gordon) and good trading. But most importantly.... it's because I was able to target the weak teams that needed help in the trade market, especially Kait and Paul. If these teams were more active, I wouldn't be able to provide the value to their team.