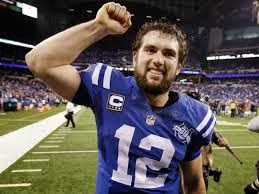 Andrew Luck and the Colts are traveling to New England to take on the Tom Brady and the rest of the Patriots tomorrow night.

I've blogged about Luck before. I'm a big fan and it was great to see Luck lead the Colts back to victory last week (thrilling 45-44 win over the Chiefs) for his first career playoff victory.

With the Colts in town there is/will be a lot of sports talk surrounding Luck, who he is and what he brings to the table. Earlier in the week, Mike Felger from 98.5 The Sports Hub (which I heard is an awesome advertising platform. inquire within.) took the Luck-love a step further saying that he is basically a good bet to make the Hall of Fame, and that he cant remember another 2nd year player he felt so strongly about. 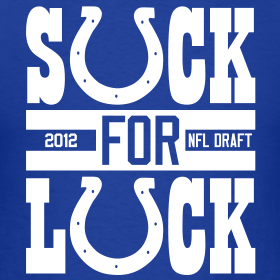 I mostly agree with that. Obviously it's odd for "Hall of Fame" talk to surround a 2nd year player, but if ANYONE ever deserves that hype, it's Luck.

Many scouts considered Andrew Luck to be the best NFL prospect since Peyton Manning. This article actually breaks down Manning as a prospect vs Luck as a prospect, with Luck winning. Luck is also very smart- he earned his Engineering degree from Stanford in 3 years and was the Valedictorian of his High School Class. His father was an NFL QB as well.

Because of all this, I think you HAVE to take into account Luck's past when talking about predicting his future. He's a phenom. A once in a decade type player. #1 overall pick... and not the same type of #1 overall pick as someone like JaMarcus Russell. Andrew Luck is and was a cant-miss prospect. 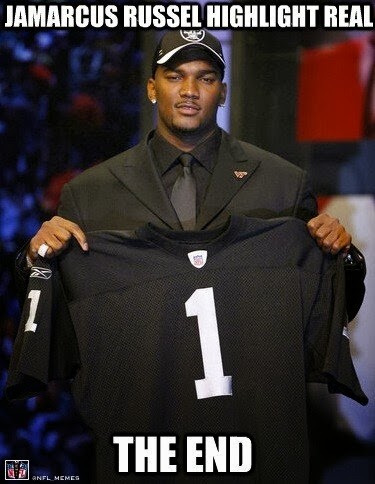 Need more proof that Luck cant be compared to Russel (and other questionable #1 picks):

"I think JaMarcus Russell to the Raiders scares me. I would have done the exact same thing Oakland did, to be sure. But the formula for early success is a bad one there. So much pressure on him to perform well early, with such a porous offensive line, and who knows what at wideout."
-- SI's Peter King

"If you had to choose a quarterback, who would you pick, JaMarcus Russell or Brady Quinn? Both have strengths and glaring weaknesses. It goes down to which guy is most coachable. I might take Quinn for that reason. But, pure skill with a ton of work to do, it would be Russell. If you put a gun to my head, I would pick Russell. But he comes with a lot of risk."
-- ESPN's Merril Hoge

"He has a cannon for an arm, can make all the throws and has great size. Heck, he looks like a tackle playing quarterback. I just don't see the pinpoint passing, the great timing of the throws or his feel for the pocket. He's careless with the ball, at times, and he struggled against the better college defenses. Can he develop into a quality NFL quarterback? You bet. Would I take him with the first overall pick? No way. As of now, I have him rated at the 20th-best player."
-- CBSSports.com's Pete Prisco


I dare anyone to find anything even close to this on Andrew Luck. Its incredibly hard to find anyone that had any real negative thing to say about Luck. 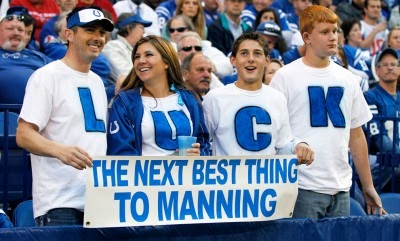 I got into a debate with some friends (shocker) and believe it or not, a few of them don't think Luck is "proven"

Obviously "proven" can mean many different things. MY definition of proven for this argument is:

"Established winning NFL caliber QB that can have sustained success"

If the NFL threw every player back into a pool and re drafted, I honestly think Andrew Luck would be the top pick. This league is driven by the QB position, so Aaron Rodgers or Andrew Luck would be my #1 overall pick... although I think I would lean towards Luck because he is 7 years younger, and his ceiling is probably even higher than Rodgers.

-The Colts went 11-5 in 2012 in Luck's rookie year. They made the playoffs, but were bounced in the first round on the road by the eventual Champs, the Ravens.  That's a 9 win improvement from the previous year with a "rookie" QB.

-The Colts won the division and finished at 11-5 again this year. Last week, they won a wild comeback at home and Luck secured his first playoff win.

Those 12 wins came against:

Obviously  Houston, Jax, and Tennesse suck so these aren't anything to write home about. HOWEVER... there is something to be said when a team sweeps their division. That's what the Colts did this year. Won every division game.

They also defeated Seattle, Denver, San Fran, and KC twice... Many consider the first 3 teams to be the best in the NFL. These teams all lost a TOTAL of 16 times. The Colts were responsible for 1/3 of those.

I know we are talking a lot about the team right now, and not Luck specifically... but for good reason. Andrew Luck IS the Colts. Their defense isn't great. They lost 4 out of 5 of their starting offensive lineman. They lost Reggie Wayne. The Trent Richardson trade was a disaster. I'm 99% sure anyone who follows this team can be sure in saying that Andrew Luck is the reason why the even have a chance every Sunday. 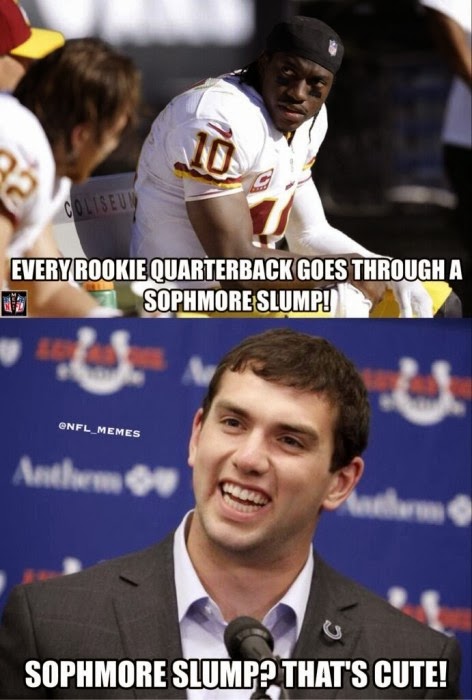 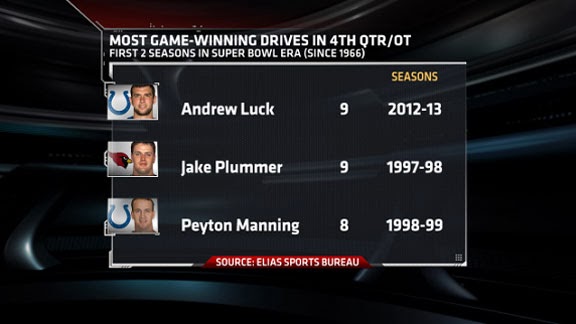 Andrew Luck already has more game winning drives than Aaron Rodgers and Cam Newton. He's on pace to break the record for both game winning drives and 4th quarter comebacks. That's for real. For the people who say Andrew Luck hasn't won many big games... what are you talking about? He's clutch as hell. Pretty much done the most he has possibly could with the talent around him.

So yes, even though this 23 year old is still young, don't make the mistake of thinking that means he is unproven. Let's all just hope (as Patriot fans) that the rest of the Colts don't come to play, because we all know Andrew Luck will.