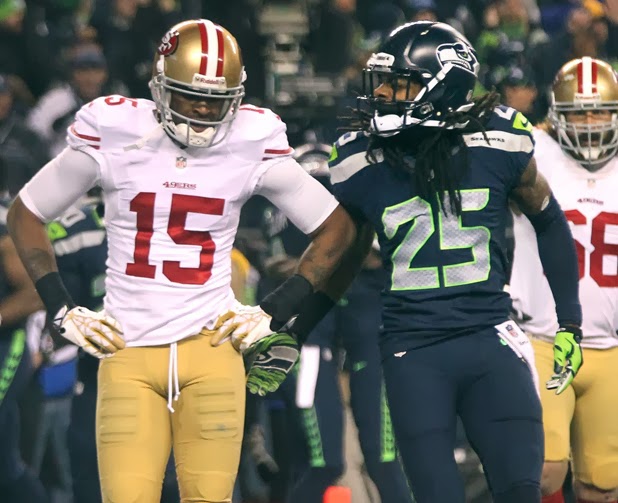 I can’t believe I have to write this blog. First, It’s well documented that I’m not a fan of Richard Sherman. Second,  I thought FOR SURE after the game the other night everyone would finally see what a class-less d-bag Richard Sherman is. Apparently that isn't the case.

Before I go on, You NEED to see what he did after the game the other day, if you haven’t already. Videos are posted below, and if you cannot see them click here and here. (And if none if this works, just search on youtube for Sherman interview with Werder and Andrews)


Let me start off by clarifying why I hate Richard Sherman so much:

It’s NOT because he talks shit or because he is cocky. I actually like when players, and specifically cornerbacks, have a “swagger” about them.. and it brings added  interest to the game. I like knowing Sherman and Crabtree have this personal battle… it makes the in-game matchup more interesting and creates a  “game within the game” to watch.

However, Sherman takes it to the next level. Let’s take a look at the final play in the game that he made. If you can’t see the video below, click here.

Nasty. Sherman shows incredible athleticism by turning and jumping to bat the ball away. Monster play.

However, directly after the play, Sherman starts taunting Crabtree. Goes up to him, gives him the “choke” sign (which doesn’t make any sense- Crabtree didn’t choke on the play or in the game (UPDATE: apparently Sherman DID give this choke sign to Kaep and not Tree. In that case at least it makes sense, but this means Sherman now decided to taunt 2 players on this play. And Kaep hadn't said anything to him pre-game like Tree, so apparently Sherman was just being an all around jerk, not just to the person who he had a war of words with) and then disingenuously puts his hand out to say ‘Good Game.’ Anyone who thinks that was an act of sportsmanship is delusional. Sherman was smugly in Crabtrees face to say GG. I have no issues with Crabtree pushing him away after this.  That’s my first and biggest problem with Sherman.

My second problem is obv. his comments after the game. Erin Andrews pulls Sherman aside, and asks him to take her through the final play. All he responds with is a scream-  “Well I’m the best corner in the game! ”

First off, that’s not an answer to the question. How the hell is that taking someone through a play?  Then Sherman volunteers the info “When you try me with a sorry receiver like Crabtree, that the result you ‘gon  get! Don’t you ever talk about me!“

This confused the hell out of everyone (or at least me) cuz I had no idea who Sherman was talking to when he said “don’t talk about me’”  Andrews, being the exceptional sideline reporter that she is, asked for clarification “Who was talking about you” ?

“Crabtree. Don’t you open your mouth about the best! Or Imma shut it for you real quick. L.O.B.”

Cool dude. You made a play on an underthrown ball (didn’t even pick it yourself) in double coverage and you’re going to talk shit to Crabtree? At least direct you’re shit talking to Kaepernick or something.

Can you imagine what people would say if after a game winning drive all Tom Brady said was “ I’M the BEST QB IN THE LEGAUE!!! DON’T TRY TO STOP ME… I’M THE GREATEST”  ? All his WRs who made plays on that drive  (And the O-Line that gave him time to throw) would be pissed. Like WTF dude it wasn’t all you. Were you the main reason something happened? Sure. Only reason? Hell no.

Sherman acted like a selfish a-hole with no respect for the game whatsoever. Completely unprofessional. After the game in his press conference he continued to belittle Crabtree calling him “Medicore” about a million times. Apparently the two have had an issue going back to a Charity event in which they got in a war of words. (Nice. At a charity event. Real nice) Anyone who doesn’t think this was a bullshit act of epic proportions must not understand sportsmanship. This wasn’t just an excited player giving an off the cuff remark after a game. Again, I’m all for the shit talking, but after the game? When their season is over? There’s a time and a place for everything. This wasn’t the right time to talk shit about Crabtree.

PS. Hey Sherman, if Crabtree sucks so bad, why is it even a big deal you made that play? Why are you acting so surprised to make a play vs a “mediocre” WR?

PPS. Anyone ever hear Joe Haden or Darelle Revis say anything like this? No? But everyone still respects them?  Just wondering.

PPPS. Can’t wait until Peyton makes Sherman his bitch in the Super Bowl. Just one long TD in his face is all I’m asking for. Kinda like how my boy Roddy White did it to him in the playoffs last year.

PPPPS. The fact that Novarro Bowman wasn't awarded a fumble recovery is the biggest travesty I've seen in Sports in a long time. Completely different game if the 49ers get the ball there. Which they should have. And no Jeremy I dont care if the 49ers got the ball back a play later. Hindsight is 20/20. 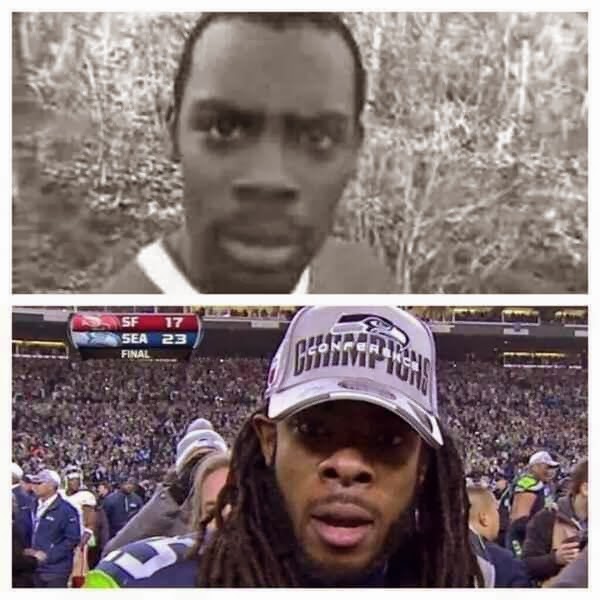 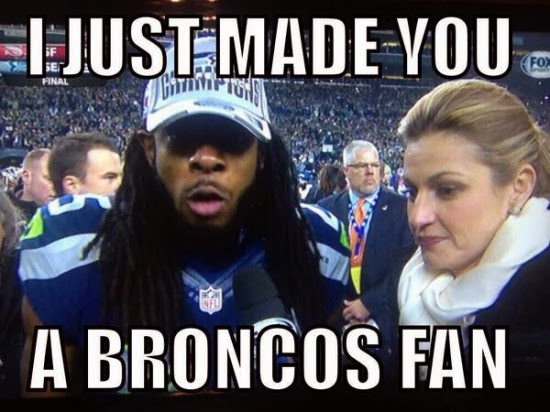