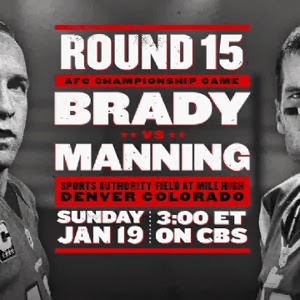 NFL's view of Brady vs. Manning- By Mike Freeman

This is not going to be yet another column ranting about who is better: Tom Brady or Peyton Manning.

We'll compare in a much different way, at least. I asked a group of eight people—all NFL personnel men, including scouts and one general manager—whom they preferred: Brady or Manning. They were guaranteed anonymity so as not to anger Brady or Manning.

The sample size is small, no question. Yet it is also instructive. My guess is these results would extrapolate across football.

The question was simple: Who do you think is a better quarterback, Manning or Brady? I emphasized that I was asking not who will be better in the future, but who is better now. Right now.

Then I asked the personnel men to step into their TARDIS, go back a year, and answer the same question. That is, it's the 2012-13 season. Who would you pick? The result was 6-2 Brady.

Then, they were asked to go back five years. The vote was 4-4.

Overall, there was a central theme among the voters: While Manning is a more physically gifted thrower, Brady is the better overall quarterback because he has done more with less.


First of all, pwned. So hard. Oh Peyton Manning is coming off the best offensive season ever? Broke the record for passing TD's and yardage? That's cute. While ESPN and all the other media outfits obviously pump up/ commercialize  Peyton ALL the time, the experts- the NFL personnel people who are paid to evaluate football players- have responded. 7 out 8 in this poll say Tom Brady is better, RIGHT NOW. The central theme among the voters was that Manning may be the more talented thrower, but Brady has done more with less.

Back in high school, the #1 sports debate I repeatedly had was the “Who is better Peyton or Brady?” with my two buddies Luke and Zach.

Luke is a Broncos fan. Zach is a bitter Raiders fan, he never quite recovered from this.  Both of these guys HATE the Patriots just like everyone else outside of New England. When I say hate, I’m talking like, irrational hatred spurned from years and years of jealousy. The type of people who are so desperate to tarnish the Pats success, they cling to the “Spygate” thing and basically discount every Pats win.

Anyway, back in High School, we used to always debate Brady vs Manning.

These guys would always point to stats to back up their opinion that Peyton was better. I remember consistently trying to point out that Peyton’s crew was vastly more skilled and the numbers truly didn’t tell the whole story of Peyton vs Brady. Let’s take a look at the personnel each QB was surrounded with during this time. (I’ll use the years 2001-2004, the 4 NFL seasons I was in HS)

I think you see the point. Peyton was always surrounded by much more talent, always had at least 1 Hall of Fame weapon at his disposal. Brady was surrounded by role players. I had ALWAYS argued with Zach that even though Manning’s numbers were superior, Brady was still better AND if he was given the same weapons I always believed he would put up similar numbers.

And in 2007 when Brady finally was surrounded by actual NFL talent (Moss and Welker) he responded with video game numbers. Confirming everything I ever thought. Fantasy Football influences our opinions on NFL players far more than people think. Peyton has always had the numbers, so he is perceived as the better QB. Simply not the case. Also, Brady’s career has been played in New England- known for brutal weather. Peyton? Cushy Indoor dome. Huge advantage.

Anyway, of course when this article came out, I just felt the need to inform Zach (and Luke) about the results of the poll.

Here is what Zach said:

“After some thought James Brown, this is bullshit. There's no doubt Brady has done some amazing things in his career. However I don't think it's fair to say he's done more with less. While Manning may have had more talent on his offenses, Brady has had a few things that Manning hasnt. 1) Bill Belichick 2) he's played for the same coach, the same system his entire career and 3) much better defenses. So overall, Peyton Manning is the more talented QB. I think it's safe to say that Manning has had to do more with less because he is constantly having to put up 35+ since his defenses have never been worth a shit.”


First- Yes it is true Brady has always had the same coach. Belichick, a defensive minded coach from a defensive background, has always been at the helm. But let’s not pretend like Peyton was at a disadvantage here. From 2001-2008, the bulk and prime of his career, he had the same head coach. Hall of famer Tony Dungy. During this long period of time, Manning actually became the pseudo-offensive coordinator… as in the Colts trusted Manning at the line and he basically ran the offense himself.  When Dungy left, the offense never skipped a beat.

Further, Tom Brady has most certainly NOT played in the same system his whole career. The Pats offense has evolved many, many times over the years. Just look at the past 12 months as an example. The Pats were running a 2 TE system the past 2 years. Now they don’t. During the 07-09 years, the Pats ran a vertical passing attack offense. Before that it was built on short quick passes. They were essentially the first team to replace the run game with the “short pass” game. Anyway, just because Belichick and Brady have been together this whole time, that doesn’t give Brady an advantage over Peyton IMO.

The next point Zach made was that Brady had better defenses than Peyton Manning. I’m not sure if he is saying this is why Brady has had more success or what, but let’s dive into it.

These are both teams scoring defense ranks each year

Pretty mixed results. The Pats had “better” defenses about 2/3 of the time. I agree that part of Brady’s success was driven from the opportunity his defense created for him, but at the same time Brady was the MVP of the Super Bowls in 2 of the 3, even with the good defense. It’s not like he is Trent Dilfer who rode his defense to a Championship. Brady was the difference maker in the big games.

Further, Peyton Manning having worse defenses only means his teams were involved in higher scoring games, thereby inflating his stats.

Overall, though, those 8 NFL execs that were asked who is a better QB know all of this. I am sure they considered every point Zach made and STILL 7 of the 8 think Brady is a better QB. Because he is. 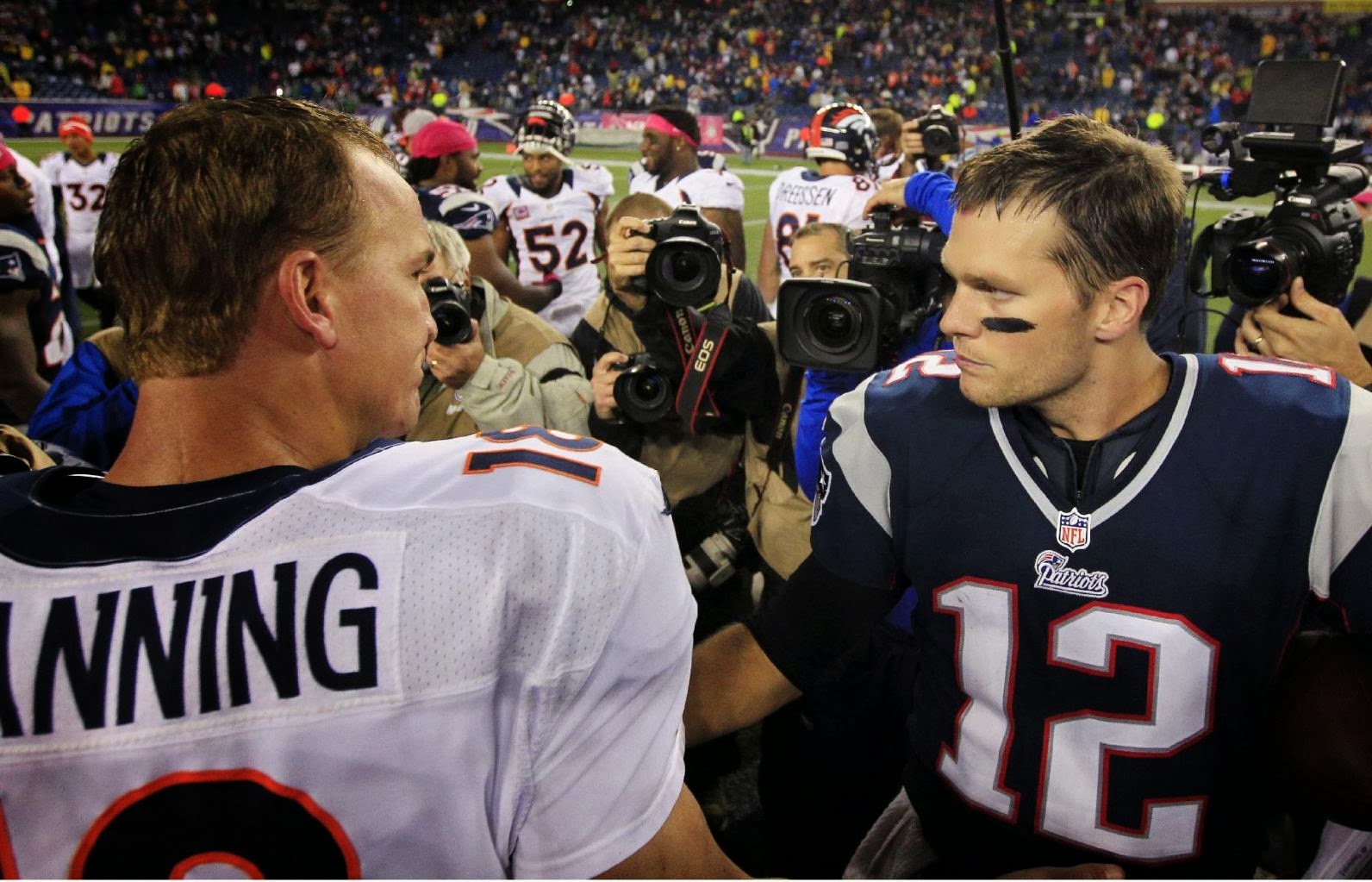 
"The most crystallizing, defining measure of a quarterback is this: whether he can perform at his best at the most crucial moment of his given season.

Manning, 37, has superior career passing and touchdown numbers, but those will never trump these: Brady, 36, has won twice as many playoff games and two more Super Bowl trophies. And he’s been to three more Super Bowls and four more conference championship games.

Even the best statistical argument for Manning in my mind — his 51 game-winning drives, which is tied with Dan Marino for the most in a career — falls short. Brady has led 42 such drives, but six have come in January or February, three of them in the Super Bowl.

That’s not merely clutch for his era. That’s historically money.

Joe Montana has 33 game-winning drives, but just three in January — including “The Catch” to Dwight Clark against Dallas in the 1981 NFC Championship (which Brady actually saw in person as a 4-year-old Bay Area kid) and the 1988 Super Bowl to beat the Bengals.

Of Marino’s 51 game-winning drives, four came in January. John Elway had five in January, and Brett Favre and Drew Brees had three each in January.

Of Manning’s 51 game-winning drives, just two have come in January: his signature win against the Patriots in 2006 that the Colts parlayed into a Super Bowl win and another against a 6-10 Titans team on the last day of the 2010 regular season.

Bottom line: Manning’s greatest hurdle Sunday really isn’t Brady; it’s overcoming his own failings in January, including the four times his team entered the postseason as the AFC’s No. 1 seed and lost at home. He has won the big one once. That’s it.

Manning will always be considered the better pure passer and mastermind behind the line. But Brady will go down as the greater competitor in meaningful games, who made better decisions when the season hung in the balance.

When all of Manning’s numbers and awards are calibrated, this is not an argument but merely a manipulation of statistics to support a weak thesis: that a quarterback with more yards and touchdowns is simply better.

Brady doesn’t have to beat Manning for the third time in four conference title games to be thought of as the more accomplished quarterback. If the Patriots knock off Denver, he is on his way to scaling Montana and Elway, the only two of ahead of him in my all-time, top-five pantheon right now.

Fact: Brady and Montana are the only two players in NFL history to win the NFL Most Valuable Player and Super Bowl MVP awards multiple times. If Brady wins two more games this season, he will have as many world titles as Montana.

Fact: Brady and Elway are the only two quarterbacks to lead their teams to five Super Bowls. If Brady takes the Patriots to a sixth this season, he stands alone.

Fact: No quarterback has more wins in playoff history than Brady’s 18 wins against 7 losses. Montana went 16-7. Brady has 31 more regular-season wins than Montana and has a higher career passing rating.

Fact: Peyton Manning is 10-11 in the postseason.

For Manning’s professional sake, I hope the Broncos blow out the Patriots and the game is decided before the fourth quarter. I hope for all concerned legacies involved that the game is over long before the final few minutes and that Manning becomes one of the three oldest quarterbacks to win it all after Elway won at 38 years old and Johnny Unitas won when he was 37.

Because if it is remotely close with three minutes left, I will take Brady over Manning 10 times out of 10 — in January, in February, wherever. (We’re talking Peyton Manning here; Eli has stolen two Lombardi Trophies from Brady.)

If Brady outplays and beats Manning’s team Sunday and wins his fourth Super Bowl in February, he not only further distances himself from the main contemporary of his era but he also scales Elway and, finally, Montana as the greatest to ever play the position."