1. Team Ice Cream (last week #5)- Adam's team takes over the top spot in the power rankings after his second consecutive blowout victory. This time the team was fueled by rookies T-Rich and RG3, who combined for 59 points. There is a lot of depth at RB here and with a bunch of teams already desperate for starters (bye weeks haven't even started yet) Adam should fair well in the trade market.

2. the rental guys (last week #4)- Like I said in last week's matchup, Dan has a high floor. He had a somewhat slow week and still put up 114, probably right around the minimum he can expect as long as Cam Newton keeps up his incredible play from week 2. The loss of Forte for a few weeks is somewhat of a damper, but with his handcuff/RBBC partner Michael Bush already on this roster, there should be no major problems. If Reggie Wayne produces at this level all season, the rental guys are going to win a lot more games.
3. Victorious Secret (last week #1)- Kait's team had an off week- Andre Johnson, Jay Cutler, and Marques Colston combined for 14 points. Cutler DID show us all why it may be tough for Kait to dominate like last last year- he is going to have a couple more performances similar to this week, which may hold her team down. Kait edges out Adam for best RB group in the league- Sproles, Mccoy, and Spiller all dominate and all are top 10 options for the next few weeks.

4. Boston Patriots (last week #2)- The Boston Patriots only put up 102 points this week, but I expect week 2 to be season lows for both Peyton Manning and Julio Jones. Same deal as last week... this team, will be a force in the first half of the season, so wins need to pile up now for this team. It's going to be a battle in week 3.

5. Tahiti Loungers (last week #3)- Well my team scored 86 points, the second-lowest in Loungers history. Of course, I was playing Dan. How did this happen? Well, the week started with Brandon Marshall somehow only scoring 4 points. Then, the lowlight of the weekend, Aaron Hernandez got hurt in the 1st quarter and exited the game with 0 points. Lance Moore, Dexter McCluster, and Eric Decker didn't really show up at all this week and Foster's 26 wasn't enough to save me. Ben Tate dominated on my bench and proved that there will be weeks where him and Foster are both startable. The return of Ryan Mathews is going to be the boost my team needs right now... a big matchup with Boston Patriots in week 3 will be a good battle.

6. A Pinch Better (last week #8)- Well, I was wrong about this team saying they wouldn't top 130 again this season...that seems idiotic now that Sean put up 153 this week. Granted Eli Manning and Victor Cruz both had career games, but then again they will probably have a few more of these this season.  I still think this team is pretty thin and not going to hold up, but there always seems to be a team in the league I hate that does well. It's usually Dan's but it may be the other Cosgrove's this year.

7. Crossing Guards (last week #9)- Bill responded with a huge win in week 2. Hakeem the dream Nicks carried the guards on his back this week...he scored 41... but with one more yard he would have boosted all the way up to 48. I have a feeling Percy Harvin is going to have a handful of similar games to this week... lots and lots of touches and yards. No TD this week but no mistake, Harvin is a PPR stud. Once Stafford starts heating up this team will likely rise in the standings.
8. Eat More Chicken (last week #6)- Jenna made a crazy run on Monday night and jumped from like 10 points all the way up to 135. The Matt Ryan- Roddy White connection looked great and unfortunately, Jenna had another really tough loss. I feel bad dropping her team 2 spots in the power rankings because the 135 would have beat most teams in the league this week, however this team is going to get crippled during bye weeks with no real fantasy starters available on the bench (Jeffery, Mendenhall, Randy Moss. Dalton and Rivers) . Jenna will start feeling that heat this week with the S-Jax injury.  Maybe it's time to unload your 3rd, useless QB. 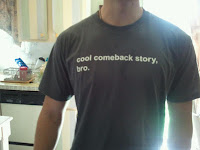 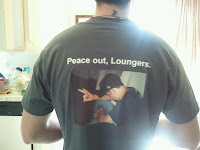 9. Comeback Story (last week #11)- Donny got lucky he caught his sister on a down week, but nonetheless comeback story scored a high total of 140 points. Danny Amendola's 41 points left on the bench kind of stings, he may be a better weekly option than the inconsistent Dwayne Bowe. The injury to Hernandez is a big bump for both Gronk and Lloyd. This team may rise in the rankings in the next few weeks, but the lack of any depth at rb is going to cost this team wins at some point.
10. A1 Providers (last week #12)- Paul had a huge week. This is why Paul is in the league, because he gets crazy lucky sometimes. Even though it is a really weak roster, all the players contributed this week and V Jax actually had a 25 point performance. If Cedric Benson keeps looking as good as he did the other night that would really help this team, but Turner is just about dead, and who knows what the F is going on with Wes Welker this year.

11. The Godfather (last week #7)- Another loss for Abe brings the 2012 rookie total to 0-4 (Jenna and Abe combined.) The disappearance of jamaal Charles is concerning... Abe's team needs that force at RB, especially with the loss/hampering injury to Ahmad Bradshaw. Greg Jennings needs to stay healthy and Tom Brady needs to escalate his play. If the studs Abe invested in actually play well, Abe will be fine. If they suck like htis week, it will be a long season.

12. Angry Pirates (last week #10)-  Oh how the mighty hath fallen. This is the result when you get biggest blow out against you twice in the first 2 weeks. Campbell's disgrace of a roster wasted a heroic performance by Reggie Bush, who scored an impressive 40 points.  EVERYONE else was a letdown. 10 from Rodgers. 1 from Larry Fitz. 11 from AP. Aint going to hack it. Campbell has made early-season shake ups in the past... will he be looking to make a move sooner rather than later again this year?