If you read ESPN you know Matthew Berry, Talented Mr. Roto, TMR... he works for ESPN as a fantasy analyst... aka the greatest job of all time. Every week he writes a Love/Hate column for specific players he likes/doesn't like more than the consensus.

My team is allllll over his list this week! He only lists a handful of guys at each position so getting 2-3 guys on here is pretty cool, let alone 6.  Here is what he says about my boys: 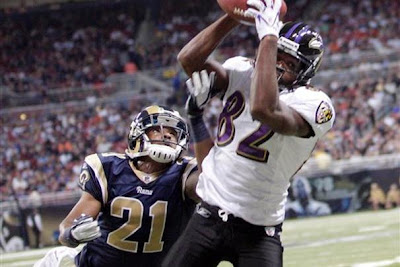 Ronnie Brown, Chargers: Do I have to love every player? Can't I just admit it's last call at the fantasy nightclub and that, after drinking all night and looking around at my options, decide that if I squint my eyes, I can sorta, maybe, kinda talk myself into liking Ronnie Brown until the next morning? I can? Because they don't all have to be beauty queens, kids. Or kings. You ladies out there know what I am talking about. Are you doing the walk of shame on Tuesday morning after using Ronnie Brown? Yes. But the fact remains that I think there's no way the Chargers will risk Ryan Mathews in this game. Brown will get the majority of work, and last season, Oakland's 27th-ranked run defense allowed 24 rushes to go for 20 yards, second-most in the NFL. Hmm. Wonder if all the nerdy stats I'm dropping is also why I'm looking at 1:45 a.m.?

Brandon Marshall, Bears: Well, let's see ... I already like Cutler, Forte and Bush a lot in this matchup ...

Torrey Smith, Ravens: More stuff from the preseason. When I wasn't talking about Harvin or Brandon Marshall, I was usually discussing Torrey Smith. I get it, you may not have been able to hear me over all the slobber, but trust me, it was Torrey Smith I was getting all passionate about. And usually when I talked about Smith, I discussed his improved route running and Flacco's tendency to throw to him deep. Like, this is a typical stat I'd mention, from the wacky kids over at ESPN Stats & Information, who like to get all Next Level on you: Joe Flacco attempted a career-high 70 passes of more than 20 air yards last season, but also completed a career-low 24.3 percent of such throws. Torrey Smith was the targeted receiver on 32 of those attempts, the most by Flacco to any one receiver in a single season.

Eric Decker, Broncos: Another gut call, but remember how Demaryius Thomas burned Ike Taylor last year for the fightin' Tebows, er, Broncos to upset the Steelers in overtime? Well, I bet Ike Taylor does, too. And I'm guessing he'll desperately want Thomas, not Decker, in this matchup. Already think Decker will be Manning's favorite target; this just helps the cause.

Aaron Hernandez, Patriots: Time for another ... nerdy stat! The Titans' defense allowed 52 completions to tight ends inside the numbers last season, tied for sixth-most in the NFL, despite facing only one of the top four tight ends in that metric last season (Jimmy Graham). Aaron Hernandez (61 catches) and Rob Gronkowski (57) finished second and third, respectively, in receptions inside the numbers among tight ends. Read it now, believe it later, kids. Gronk is and will be a stud, but the year of Aaron Hernandez starts now.

Seattle Seahawks: I have them at No. 3 this week. And I'm tied for the lowest on them. All aboard, kids. The bandwagon is leaving the station.

Click the link below for the full article:
http://sports.espn.go.com/fantasy/football/ffl/story?page=TMR120905