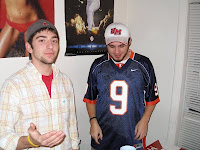 
You all know/remember Matt Wilson, he participated in the 2012 NFL 1st Round Mock Draft. Wilson has always had interest in the Dirty D, he is on a short list of people who are on reserve for the league. Matt has being playing fantasy sports for a long time, even for longer than my 13-14 years or so. He e-mailed me this after reading my draft analysis:

After reading over James' blog about the Dedham draft, I'm bringing another opinion to the table. Some people pay for outsiders to evaluate their team, but I am just going to toss some analysis out there.

1) Tahiti Loungers- While I understand the upside, I'm not crazy about the McCluster pick. For that point in the draft, it's not a deal breaker, but just saying. Romo falling as far as he did really put this team over the top for me. I like the Hernandez pick a lot since he still got Torrey Smith. I personally am a Ray Rice guy. The way I see it, if Rice goes down my team is likely screwed anyway. If you go Rice, you don't have to go Tate so early and you aren't locked into another pick. I wouldn't mind Donald Brown, J-Stew as my 3rd RB instead of Tate. I am convinced the Tahiti Loungers seeing me take Brandon Marshall (also over Andre) in our other league gave him mental permission to make this pick.

2) Team Ice Cream - I like this team a lot. Granted this is a personal bias, but it is VERY similar how I would want to build my team. Richardson in the 4th is ridiculous. Everyone else in the league sucks for letting him fall that far. I take him ahead of Martin, F-Jax, Benson, Turner, Gore, and Bradshaw. And I like Martin and F-Jax, I just like Richardson a LOT. #1 steal of the draft to me. Plus, Murray falling in round 2? Only reason he falls is the injury risk, but now he fixes that risk with T-Rich. Love the QB combo. I think that's the perfect way to play QB after the big 5 go. Don't like the Jermichael Finley pick; too similar to guys that went later. Love David Wilson and even love the 49ers D for where he got them; dislike Baldwin, Hillman, and Simpson picks. Baldwin might be good, but Cassel still sucks. I'd have grabbed Collie there; brain injuries and all.

3) Victorious Secret - Two stud running backs is a great start and two nice starting receivers. Not crazy about Desean Jackson (I'd have gone Torrey Smith there), but the Greg Little pick makes up for it. Kait covered injury risk Gates with high-upside Jared Cook, which is awesome. The QB is a total wild card. I like Cutler a lot this year, but in a 12 team league he's not in my top 12 (Rodgers, Brady, Brees, Stafford, Newton, Ryan, Vick, Romo, the Mannings, Rivers, and RGIII). All of them were gone at that point though, so I guess it is what it is. I would have grabbed a higher upside backup than Palmer though. Still, everyone else was just outdrafted by Kait. Once is a fluke, twice you're in trouble...

Honorable Mention - Rental Guys - I like Dan's team a lot, too...until the end. I'm guessing he got hammered during the draft because the last four picks are trash. The Jets have an absolutely horrible offense. I go Amendola, Bess, Mike Williams or Collie there instead. Floyd isn't even starting yet. Upside is fine, but Collie was there. At least you know he's playing if he's alive. With 12 teams, defenses are interchangeable. JPP is a beast, but the Giants play in a division that's going to score. 6 games against Vick, RGIII, and Romo - no thanks. That said, if the starters hold up this team will be very competitive. Pettigrew falling in PPR is a joke too. Love the top receivers, but would definitely drop one of the bottom WRs for an upside RB.

Steal of the draft - Trent Richardson. He's already practicing again and the guy has been compared to Adrian Peterson coming out of college. Meanwhile, clown central running backs going before him.

Steal of the draft #2 - Kyle Rudolph. Bill STOLE Kyle Rudolph in the last round. He waited all draft and got a tight end that could potentially out perform every tight end not named Gronkowski, Graham, or Gates. A young QB who will be prone to checkdowns, a 6'6" frame, and the guy can run. He's basically Gronkowski without the Fiesta. Granted Gronk has Brady and Ponder is not Brady, but holy shit. Great pick. Ironically, Dez falling screwed his team at running back.

Steal of the draft #3 - Should be Dez, but because it caused him to chase RB for four straight rounds, I can't support it. Instead, it's Tony Romo...which vaulted James' team into the top spot.

Reach of the draft #1 - Michael Turner. The fall of Turner is so over publicized, it's ridiculous. Yet here he is, going before Trent Richardson. Turner is devalued anyway in PPR, but now his role is getting smaller, and he just looks slower.

Reach of the draft #2 - Cedric Benson. Back to back for Paul. Ugly turn of events. Benson is only going to be in on 1st and 2nd downs. Green and Kuhn will play the passing downs, so he is again devalued. Rodgers steals rushing touchdowns, plus they just pass the ball. A lot. Wild pick.

Reach of the draft #3 - Sebastian Janikowski. It's a kicker. In a round that is not the last one. And he is questionable for Week 1. I get that he has the best leg in the league, but this team needs RB help and Gerhart (among others was there).

I enjoyed reading the draft blog entry. I think Adam and James are really growing up as fantasy players. Good drafts that look similar to what I might have done. That's why they can play in the big leagues with me. Everyone else, keep toiling in the CFL and keep getting outdrafted by Kait.