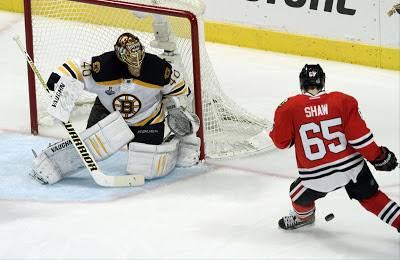 1. Boy am I glad I didn't actually see the 1st period (live)

The Bruins got outshot 19-4 in the 1st period. The Blackhawks only scored 1 goal, and it was trashy one at that. Tuukka Rask pretty much defined the term "weather the storm" and was the sole reason the Bruins had a chance to win the game. He bailed out the entire team, which apparently forgot the game started at 8pm. Rask is pretty much running away with the Conn Smythe if the Bruins end up with the Cup. Krejci & Chara are the only other real candidates, with Bergy behind them. The only other positive that came out of the 1st period was the Bruins PK held strong and continued to shutdown the Hawks PP. And we got lucky as shit the ref blew the whistle on that goal that was reviewed. I listened to this abortion of a period on the radio while in the airport. I was able to see the second 2 periods in full on the plane from Orlando to Boston. 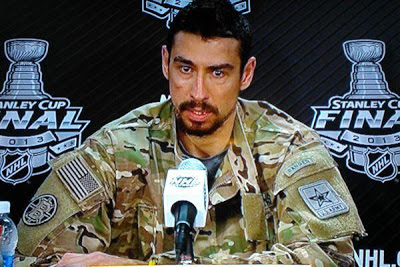 2. Chris Kelly is back, and we have a good 3rd line again

Chris Kelly last scored a goal on April 17. Insane. His huge goal towards the end of the 2nd period to knot the game at 1-1 last night was his FIRST POINT OF THE ENTIRE PLAYOFFS. Ference made a nice pinch in on the boards, Kelly dropped back to cover for him, and the timing worked out great when Kelly drove the net and buried the puck. The newly formed line of Seguin-Kelly-Paille was fire from the 2nd period on. GREAT adjustment by the Coach mid game. Thornton, Daugavins, and Peverly barely saw any ice in the 3rd or OT.Look for those 3 to stay together for the foreseeable future

Paille was an animal tonight. He was fast, disruptive, and clutch. His GWG in OT was well deserved. He had an assist on the first goal as well. Seguin also looked great, and playing with other speed players is working out nicely for him. He did a great job corralling the puck on the turnover in the OT and feeding Paille for the winner. I'm looking for Seguin to break out with a multi goal game soon. Hopefully. 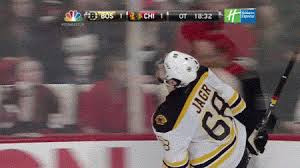 Jagr is the definition of snake bitten right now. Just can't buy a goal. He has gone over 25 straight playoffs games without lighting the lamp. He hits the post every night. Last night, he rang one off the crossbar in OT that really should have gone in. He is due for a big goal soon. So many Bruins players are so close to breaking through... we may be looking at some blow out home wins this Stanley Cup Final a la 2011 Games 3, 4, and 6. Also, side funny story. My buddy Abe The Godfather is in a goal drought right now as well, and we jokingly talk about who will score first, him or Jagr. It's actually comical how close both players have come to scoring. My money is on Jagr cuz he plays 2 more games before Abe does and he HAS to score soon.

5. The Blackhawks are really good

They really are. I underestimated their defense.... they are right on par with the Bruins in this part of the game. They have playmakers (Hossa Kane Toews Sharp) and depth (Shaw Bickell) and reliable D men (Keith, Seabrook.)  I think Crawford is good, but not as good as Rask. This the one area I think the Bruins have a big advantage and the reason why they will find a way to win the Cup. These are clearly the 2 best teams in the NHL right now though.

Marchand stonewalling the shit out of Dave Bolland hahahaha