Wow. Bruins destroyed the Penguins last night to take a 2 to 0 series advantage.  The Penguins played NO defense whatsoever.

Unfortunately, I didnt get around to writing this blog until the afternoon so theres a ton of awesome shit people already posted. I dont care. Here's a mix bag of funny GIFS, pics, and stats:

Obviously this GIF is incredible. This is how the 2nd Marchand goal from last night materialized.  Stolen from barstool, so probably 100% of you (maybe not my mom) have already seen it. Still... I cannot NOT have this GIF in my blog. Suck it Cooke you clown. 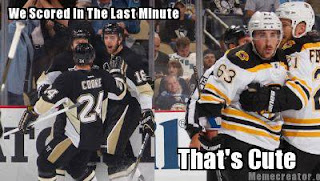 In the first period, the Penguins looked like they MIGHT have taken a little momentum away from the Bruins after scoring late, with about 30 seconds to go, to cut the lead to 3-1. Marchand responded with that goal above with 8 seconds left. 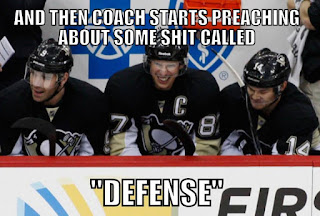 The Penguins played AWFUL defense last night. Putrid. Crosby had at least 2 turnovers that led directly to goals for the Bruins. Kris Letang, a Norris trophy Candidate, is now -5 on the series and has looked particularly bad. 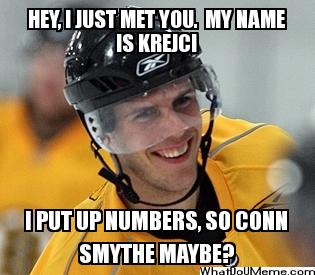 Krejci. What a gamer. Right now he is leading the NHL Playoffs in points (20) and goals (8). Oh have you heard that before? That's because he was the top point getter in the 2011 Stanley Cup Playoffs.  That year he had 23 points in 25 games.

In his entire NHL career Krejci has 67 points in 73 games. Basically a point per game player when it matters. Also, out of the 28 goals he has scored in that span (28!), 8 of them have been winning goals.

And lets not forget the 2010 playoff collapse that happened once Krejci went down and the team fell apart.

Pretty crazy stats and info on a guy who most people do NOT consider to be a #1 center.

When asked what he thought about the (lack of) attention he gets, he said

"“It doesn’t really matter,” says Krejci. “Once I’m done playing hockey, in 10 years or whatever, I’m going to have my pictures, my ring, obviously more than just one, and that’s all that matters. I’m not speaking for myself, but the best players in the world, they’re not asking to be famous or recognized, you know, but it’s just the way it is. They’re just so good that people talk about them all the time. And they deserve it. It’s not like they’re asking for it. It’s just the way it is. 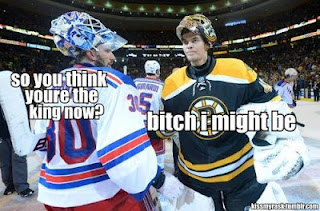 The last thing I'll touch on is Tuukka Rask. He's been a stud per usual. The Bruins as a whole have played great team defense and Tuukka has been there to make the timely save when needed. I cannot stress enough that part of the reason Rask doesn't get the attention Thomas used to is because A. We've now seen/have gotten used to dominating goalie performances and B. Thomas was a free-style goalie who had to dive all over the place and make crazy acrobatic saves. Rask isn't that type of goalie. He's much more positionally sound and therefore the theatrical saves are few and far between so some of the saves he makes arent as exciting as the ones Thomas made, but obviously equally as effective.

Here are Rask's numbers thus far in the playoffs vs Thomas from 2011 through 13 (or 14) games played.

Obviously very close. Thomas really separated himself that year by only allowing 8 goals in 7 games vs the Canucks in the Finals... but as you can see Rask is playing very very well thus far.

Also, it is worth noting the defense was excellent in 2011 and is great now... People that discredit Rask because of great "defensive team philosophy" need to recognize nothing has changed in 2 years except the D-men (esp. Chara) are a tad slower and less dominant.  Here is another twitter back and forth I had with the Pittsburgh sports radio host HARDO who came on 98.5 last week and said Tuukka was a "liability," "Average goalie at best" and said there was no advantage to having Rask over Vokoun or Fleury. LOL. 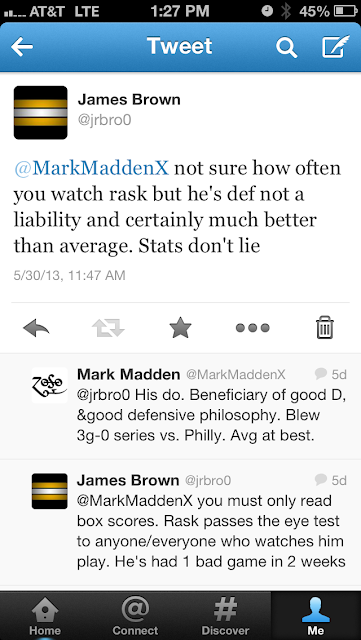 Also, I refuse to even acknowledge the dumbass comment about Rask being the goalie when the Bruins blew that 2010 series vs the Flyers. As if a VERY young goalie could never bounce back and improve... joke.