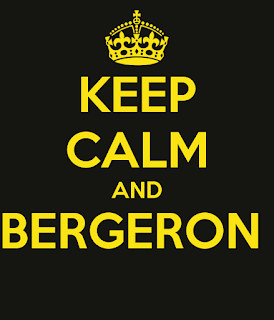 
The predetermined, usually inevitable or irresistible, course of events.


Tell me the 2013 Bruins aren't a team of destiny. Anyone? Bueller? Anyone?

Last night's 2OT win by the Bruins was the longest playoff game in over 20 years. Patrice Bergeron (of course) ended it with just over 4 minutes left in the 5th period.

The way I watched this game was very interesting. I was supposed  to referee 2 men's league hockey games in Stoneham at 8pm and 9:10. SO, as I've done in the past, I DVRd the game. I turned my phone and radio off. My plan was to head straight home and watch the game on tape delay from the beginning. After the first game ended the rink manager told us the 2nd game had been cancelled....I was so pumped. I headed home and started watching the game  from the beginning at about 9:45pm.... so I literally watched the entire game last night straight through with 0 commercials and 0 intermissions. 96 straight minutes of incredibly tough playoff hockey. Awesome way to watch a game. The only problem was I live above a bar and when the winner was scored, people in the bar and on the streets started going wild.  I was about 15 minutes behind the play so I kinda knew the Bruins were going to win once I heard the reaction from the bar. That sucked, but it was still an incredible experience to watch all that high-quality hockey straight through.

I knew the deeper the game went into OT, the better it was for the Bruins. Each team rang the post in OT and the action was pretty equal in both ends. The save of the game was Rask on Malkin in the 2nd OT.. just a great job of cutting the angle and squeezing the puck into his body with his right arm.

Speaking of Rask.. what a beast. The Penguins hit at least 5 posts in the game... again, while this is obv pretty lucky (for the Bruins), you also have to realize that Rask is always in the right position so these posts aren't as lucky as they may seem. For example, in the 3rd period Rask made a sliding save to his right, and had to get up and slide all the way back to the left of his net to stop a shot off the rebound. I forget who shot the puck on the Penguins but they hit the right post. The in-net camera showed that Rask literally had his skate all the way to the post so there was 0 room for the puck to go in. It would have hit his pad or the post. A great positional save. Tuukka stopped 53 or the 54 shots he faced, including about 8-10 shots that could have easily gone in on an average goaltender. 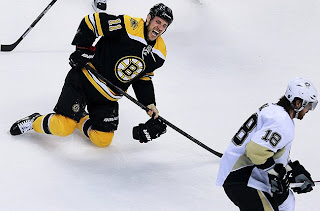 -Greg Campbell is a warrior. He blocked a shot on the PK in the 2nd period and reports are it BROKE HIS LEG. He stayed on the ice for the remainder of the shift even though he could barely move. The Bruins rallied around this act of toughness and carried the play after Campbell's last shift of the season. (He is out the remainder of the playoffs. Bring on the 1 eyed Swede!) Click here for video.

-Brooks Orpik felt the wrath of Lucic pretty badly in the 2nd OT. He kinda held Lucic behind the play and about 20 seconds later, mad Lucic rocked him (cleanly) on the glass. Orpik was clearly stunned and just kinda stood there with a blank look on his face for a few seconds. Had to have sustained some sort of concussion or something. Click here for video.

-Marchand is..... just the man. I love his game. LOVE it. I know its dirty sometimes. I don't care. He's such a gamer. People hate the Bruins because of #63 (the little ball of hate) and he is a large reason why they are Cup contenders. He has been one of the best Bruin players since the start of Round 2.

-Is Nathan Horton the most dangerous OT player in the league? No, seriously, is he? He should have a golden glow around him once the 3rd period ends. Always around the puck. Always getting chances. If I'm an opposing coach I make sure I have someone shadowing Horton every OT shift. He had a bunch of chances in OT including hitting a post on a shot that beat Vokoun.

-The Bruins PP sucks again. 0/5 last night. Looked awful on 2 or 3 of those. However, I  do love the 2nd PP unit with the young guys out there. Seguin and Krug bring some electricity to the ice when they have the time and space.

-Time on Ice is always a fun stat to look at after long games. Here are the leaders from last night. This was Chara's most ice time in a Bruins uniform. Another fun fact is the Bruins are 5-0 this playoffs when Chara plays north of 30 minutes.


Quick update on the 2 best players in the world.  Crosby and Malkin this series combined:

Jagr was carrying the puck on the right board in front of the benches when Malkin cut him off and took the puck from him. Jagr didn't give up on the play though, and he hooked Malkin and go the puck back. The hook was perfect. Enough  to be effective but not enough to warrant a penalty call in 2OT.

Marchand picked up the puck Jagr had pushed forward around the blue line. The play had developed into a 2 on 2, Marchand carrying the puck on the left side with Pens D man Engelland on him tight. Streaking through the middle of the ice was Patrice Bergeron who got inside position on Brooks Orpik and redeflected a Marchand feed into the net for the win.

I have been in favor of putting Seguin back up on the first line, however I am fully aware that the game winning play probably doesn't develop like it did if Seguin was out there instead of Jagr. Clearly the chemistry between Marchand and Bergeron is very strong... I've said it before and I'll say it again. Bergy is a top 8 player in this league. has to be. Tell me right now who you want on your team in a playoff game... Bergy or Crosby? I'll take the guy who owns the dot, shuts down opposing superstars, and scores clutch goals all day long. That's Patty B. We're lucky to have him. The legend continues. When it's all said and down #37 will be hanging in the rafters. 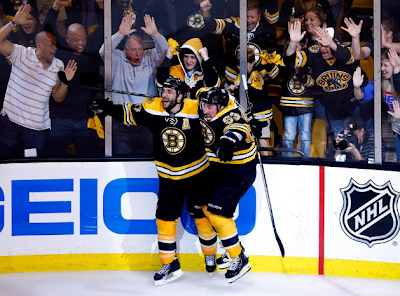