In my earlier blog post I talked about how much a dirtbag Matt Cooke is. I wrote this:

"Marchand, who should have a status as a dirty player just as extreme as Cooke's if not worse.."


I was bothered so much by that statement that I tweeted at the clown who wrote it. Apparently his name is Ryan Lambert. Here's our twitter fight: 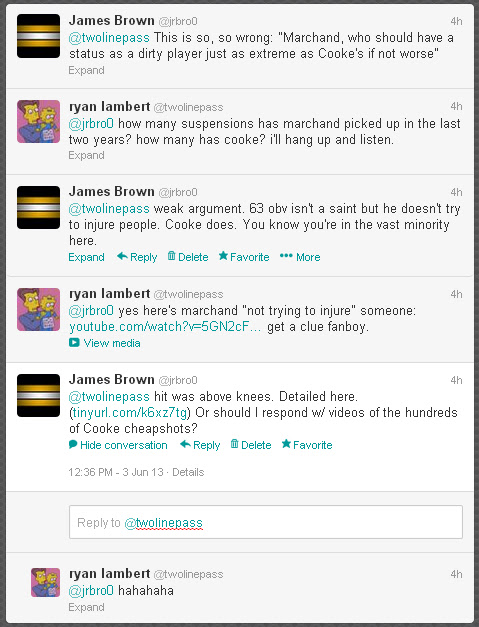 Here is the video he sent to me where he claims Marchand was intentionally trying to injure someone:

Well guess what buddy? I extensively wrote about this hit and how I dont think it was even a penalty. This is the one of the only Marchand moments that wouldnt even come close to him trying to hurt someone.


Anyway, I recognize most people still think that was a dirty hit. Fine. Call it dirty if you want. Even so, Matt Cooke has 10 videos for every 1 of Marchand.


So no, Ryam Lambert, I'm not a "fan boy" for defending Marchand against your dumbass claim.