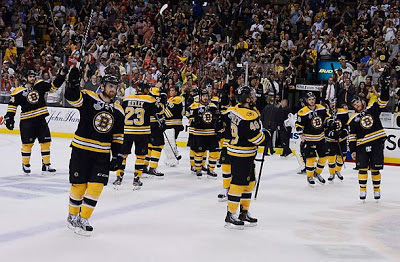 Not much to say right now. The Bruins ran out of gas, gave up 2 goals late, and the Hawks lifted the Cup on our home ice. Brutal.

-The Blackhawks got better as the series went on, and they wore down the Bruins. Usually the Bruins are the team that does that.... I guess Chicago just had a better team this year

-Lucic scoring monster playoff goals is a thing now. Everyone thought his go ahead goal with 7 min left would force the Game 7. It should have

-Bergy is obviously just the man. Played last night with broken ribs and cartilage, and suffered a separated shoulder early on last night. Played through it all. Always underrated, even in Boston.

-Jagr ends the playoff run with the B's with 0 goals. Just couldn't finish. I kept thinking his first goal would come in OT or late in a game or something.... never happened.

-Rask made some huge saves last night but I find it hard NOT to blame him for the last goal. I guess Boychuk was there and could have/should have made a play... but I still think Rask cant let that in

-Claude post game presser was awesome. Love that guy. So humble and proud. Can we try not to "fire" him  in the Boston media for a couple years now?

-Kane winning Conn Smythe was lame as hell. He was just OK in the Finals. Not sure who I would have given it too, maybe Patrick Sharp, but Kane was just too easy/popular of a choice for me.


Here's the tying goal... Blackhawks had an extra attacker on the ice. They won a couple board battles and Toews made a great pass.

Here's the Stanley Cup winning goal. Scored 17 seconds after the tying goal. I hate this one. 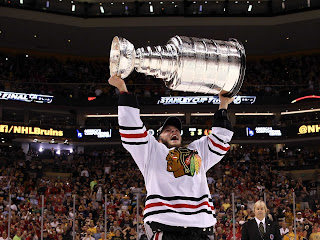