As some of you know, I was away last week on vacation. Ms. Nobody Wins on the Blue and I went to Disneyworld for a few days.

Just like any other sports fan, its always interesting to me to see other teams paraphernalia on people coming from various corners of the earth. Since no one is actually from Florida, Disneyworld was a great place to check out the gear people were sporting from different parts of the country. 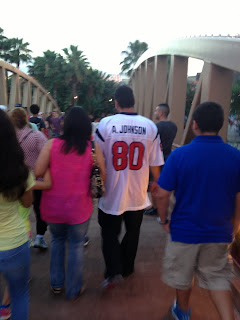 Andre Johnson jersey. One of my favorite NFL players. I saw a TON of people from Houston and couldn't pass up the chance to capture a pic of Andre the Giant 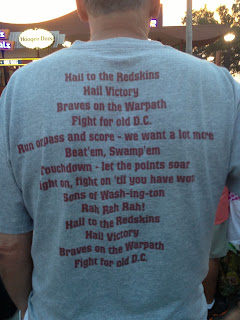 This was interesting to see. The fight song "Hail to the Redskins" out of DC. Didn't have the heart to tell the guy that without RG3 this team will continue to go nowhere. However, RG3 is looking like he is on track to start the season healthy...attempting to pull an "AP" (tearing the ACL and MCL in December, ready to play by September) 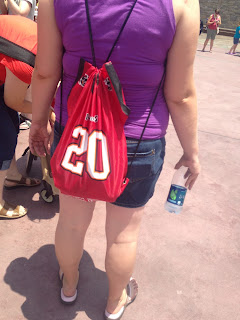 For a second I thought this was a Doug Martin bag, but quickly remembered he wears #27 not #20. This of course is the great Ronde Barber who is just a beast. I was always torn with the Barbers... Ronde is the man but Tiki is an absolute clown. Ronde unfortunately announced his retirement this past off-season, leaving the NFL even though he is still capable of being a force. 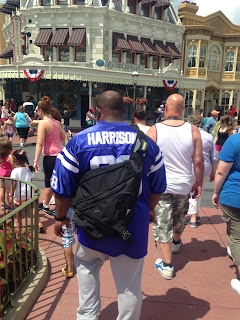 I haven't seen  Marvin Harrison jersey in a few years, and the first thing I thought of when I saw this was that the guy must have a gun in his bag. 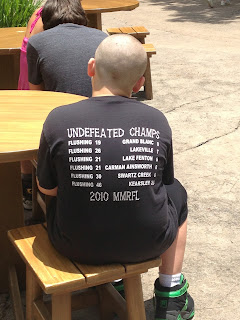 Whats up with this kid? Dude your football team went 6-0 and made "Undefeated Champs" shirts? Cmon now. What kind of trashy football league only plays 6 games. Sorry but 6-0 is weak, even though those scores are all lopsided. 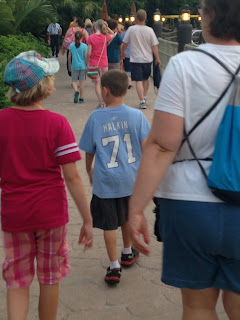 It was awkward running into so many Penguins fans on this trip. I sported my Bruins gear pretty much the whole time, and I saw a LOT of Penguins fans. Kudos to these people for sticking with the Pens...coming off that sweep there was really not much to do when walking by these people except completely ignore them. I looked the other way because I truly felt bad (for the fans, not for the players) that we destroyed the Pens so badly. I didn't want to rub it in their faces and I felt just exposing them to my Bruins gear must have hurt bad enough. 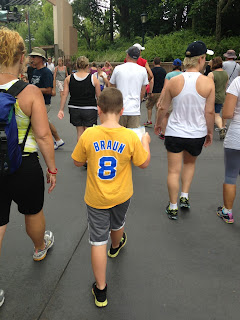 I just wanted to include this pic to trash on Ryan Braun for a second. What a fraud. He should have been suspended for 50 games last year but his positive drug test was "tampered" with so he was let off the hook. I cant stand players who vehemently deny steroid use and then get caught using..... just the worst people ever. Baseball is full of them. Braun's named was recently brought up AGAIN and I hope he gets suspended 100 games this time. 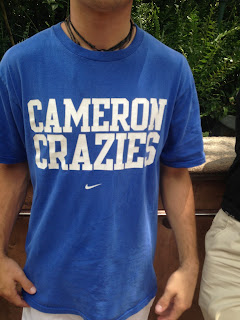 I love Duke, root for them every year. I know there's a TON of irrational hate out there for Coach K and Duke but guess what... just because the team is white and throws up 3's all game doesn't mean they are bad guys. I'd love to catch a game with the Cameron Crazies. 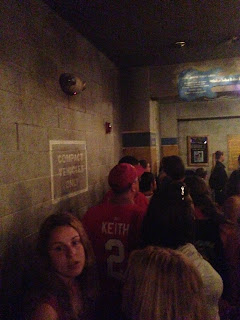 I see you Duncan Keith. I took this pic when the series was 1-0 Blackhawks so I resented every Blackhawk fan I saw the day after the 3OT loss. Keith is a beast though... and its near impossible to hate the Blackhawks because I like the way they play. 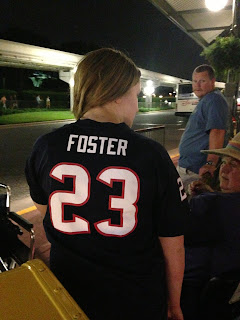 This needs no explanation. If you help me win a fantasy football championship you are going to make it onto my blog multiple times. I drafted Foster #1 overall last year en route to my  second Dirty D title. I actually asked this chick if I could get a picture of her shirt...she was so confused. Probably not near cool enough to be wearing this shirt. 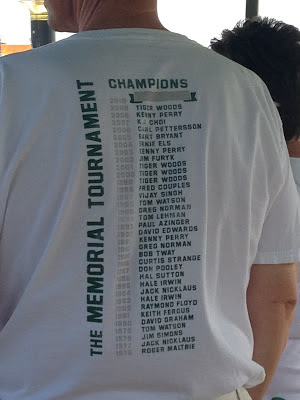 A golf t-shirt. Kinda weird, kinda cool. This lists all the winner of the Memorial Championship, the "5th Major" if you will. Here, guy, let me update you with the champs since you got this shirt 4 years ago 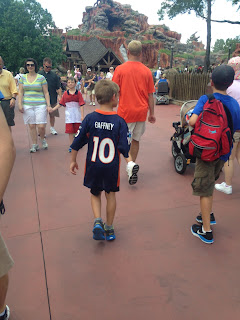 Had to swipe this pic because who the hell owns and wears a Jabar Gaffney jersey? And let me tell you this jersey looked brand new.  The only thing he ever did that was productive was his 14 catch 200+ yard performance in Week 17 of 2010 when Brandon Marshall was sitting for disciplinary reasons. No one even plays fantasy football in week 17 so that was a complete waste of a performance. Currently Gaffney is a free agent is his career is likely over. He was the first pick of the 2nd round in the 2002 draft after a productive collegiate career at Chomp Chomp University. Get a new jersey kid.