Power ranks are back! Here is the initial 2013 version for The Dirty D: 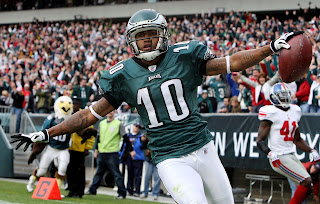 Adam’s team occupies the top spot in the initial 2013 Power Ranks for a couple reasons. Adam has scored the most points thus far and is one of only 3 remaining undefeated teams. The WR and RB depth here is exceptional… Charles, Bush, Sproles, Decker, Desean Jackson, Garcon , Stevie Johnson gives Adam the ability to play the matchups nicely. With Le’veon Bell and Bernard Pierce cooking on the bench, the future is bright for Adam. When/If Adam trades for a top tier QB or TE, watch out.  Desean Jackson is the highest scoring WR in the league and unfortunately for everyone else, it doesn't seem like a fluke. 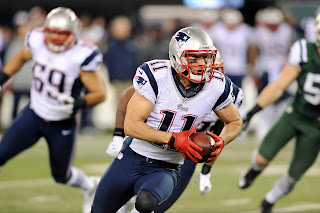 I love this team. Even though Roddy White has brought basically nothing to the table so far, Sean is still dominating the WR position. A lot of that has to do with the WR situation in New England and the fact that Sean drafted Edelman to his bench. As of now, in week 3, the RB crew here is studly as well. Foster/Tate/Murray/McFadden/Moreno provides many options for Sean.  It’s important for him to have the depth, mostly because Murray and DMC are virtually guaranteed to miss time at some point. The Rodgers-Finley connection is lethal…  Finley has a TD catch in both games so far and Rodgers has been Rodgers- through 2 games he has 813 yards and 7 TDs with just 1 interception. I am extremely happy to have won my week 1 matchup vs this team... this may be the year Sean finally breaks through and gets his name on the D 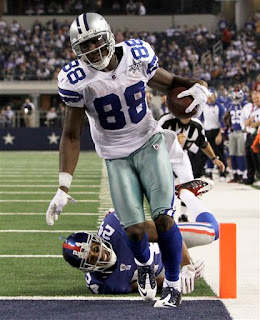 Jenna has had a huge season thus far. I’m kind of throwing out the MONSTER week 1 performance based on the fact that Anquan Boldin (51) accounted for almost a  third of her teams points (167) and that will never, ever happen again. Regardless, even with a normal game from Boldin, she would still have put up north of 130 in week 1 and followed that up with 144 in week 2. Most of the points generated for Jenna are from her Cowboys (Dez and Witten) and Forte looks like he back to being a reliable RB1 each week so Jenna is looking good there. Andre Johnson has been a beast but may have a concussion so that’s something to watch out for. A Week 3 battle is looming with top dog and fellow undefeated league mate Adam. 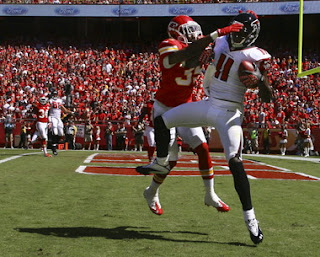 Dan’s team is clearly led by his WRs, more specifically Julio Jones. The guy’s a monster and weekly threat to put up 30 points. James Jones oddly put up a goose egg in week 1, but roared back in week 2 with an 11 catch, 178 yard beast performance. Unfortunately for Dan he was left on the bench, although Dan was able to recoup most of those lost points with rookie Tavon Austin’s coming out party. If this guy turns into a fantasy stud, its WR city on Dan’s team. The weakness with the rental guys in 2013 is definitely at RB… this may not have been the case if Vereen wasn’t lost for the next 9 weeks, but injuries happen and depth matters. MJD is now hurt and looking gross anyway so the 2nd RB slot is very weak for Dan right now. Kaepernick is going to be a stud all season- I’m almost sure he is going to finish in the top 5 QBs when the season is over. The other thing to note here is the emergence of Jordan Cameron. I was very high on this guy in the off season and he hasn’t disappointed. Now that Josh Gordon is back it will be interesting to see how the targets are distributed… I’m not too worried about Cameron losing looks. 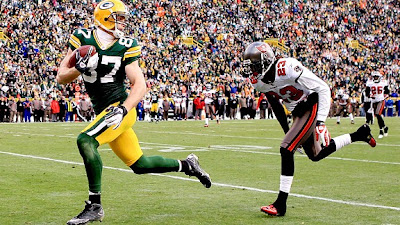 I’ve been lucky this year with scheduling. Despite only having the 8th most points in the league, I’ve found a way to start 2-0. It seems like out of the 2 weeks thus far, most of my players have had one awesome week and one dog shit week. Kenbrell Thompkins has been extremely disappointing… after dominating the pre-season he has failed to capitalize on his chance as Brady’s outside receiver. I’m not worried about CJ Spiller at all, and I expect Week 2 to be Gore’s worst fantasy performance of the season (@ Seattle DEF.)  The 2 bright spots on my team have been Jordy Nelson and Jimmy Graham. Both are studs, both have scored each week, and both should continue to have monster 2013 seasons. Better days are surely ahead for Drew Brees who is currently ranked 14th in QB scoring this year. He’s never finished outside the top 3 in our league’s history. 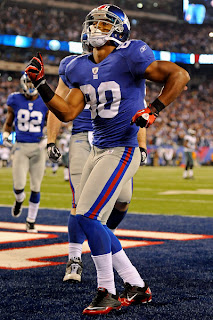 Paul, like every other year, has a more than solid starting lineup. After 2 weeks this team has the 3rd most points scored- largely due to the 109 combined points from Brandon Marshall and Victor Cruz. These guys are studs who will likely keep churning out the points all year. Ray Rice’s injury is a concern- especially because the only other RBs on this roster are Ahmad Bradshaw and Shonn Greene. Paul is going to get murdered in the bye weeks and if/when his RBs go down- Rice kind of already has and Bradshaw has a history- so we’ll see what kind of shrewd moves/pick-ups Paul can make to keep his team from tanking like last season. (last season Paul started 4-1 and ended up missing the playoffs with a 6-5-2 record.) The bench here is predictably gross… I have no idea why Sudfeld and Miller are still on this roster. 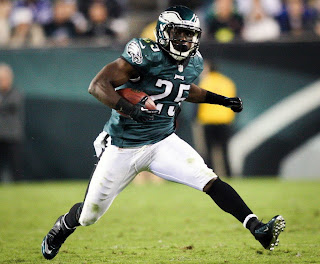 I’m pretty sure Mr. B has the worst luck in the league. He was the victim to Peyton Manning in Week 1 and lost even though he posted 138 points. Lesean Mccoy is looking like an EXCELLENT pick at #5 overall. He’s been incredible thus far and only an injury is going to slow him down. Julius Thomas was a nice pick up for these Patriots… he should continue to get red-zone love from Peyton. Randall Cobb and Reggie Wayne are rock solid WRs and this team is going to stay competitive all season. 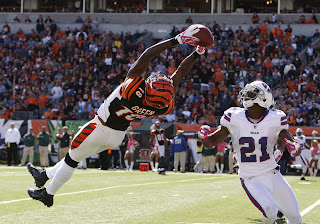 The computer picked a damn good starting lineup for Bill. Cam Newton has been held in check though 2 weeks… but the dude has never finished outside the top 5 QBs in fantasy scoring. Brighter days are ahead. The WRs are going to have to carry The Guards this year, after Skittles Lynch there is literally no other RB on this roster that should be starting. You can’t win consistently with a rotation of Powell/Ingram/Helu/Blount. It hurt just typing those names. I expect a trade or 2 coming soon from the Guards, but until then I have to keep this team lower in my ranks. The 263 points scored so far is actually the 6th best in the league… but this team is going to struggle through the bye weeks with it’s lack of depth if the roster stays as is. 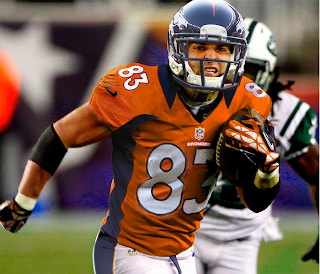 Frustration. That’s the word to describe Kait’s season so far. Her first 2 picks (12th and 13th overall) have combined for 27 fantasy points through 2 weeks. That is pathetic. What the hell is going on with Ridley and T Rich?  How is this possible? Obviously better days are ahead for both backs, but I’m starting to get somewhat concerned with T Rich. Usually, the only knock against him is his health but hes completely healthy right now and I'm starting to fear the new offensive system in place is detrimental to Richardson’s fantasy value. There’s no doubt he will be better than he has been… but when you have a healthy T Rich you expect points galore. Kait would be 0-2 if it was for the historical performance from Peyton in week  1, but the bright spot for Kait is that Gronkowski is returning soon. Once he is back, and T Rich/Ridley get right, I expect a major climb in these Power Ranks. 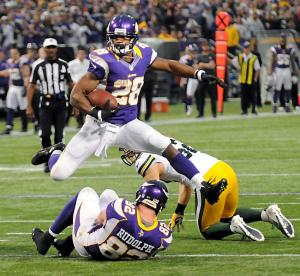 The Wilson’s are killing this team. Through 2 weeks David has… wait for it… negative 2 points total. That’s right, -2. Fumbling and blocking issues are keeping this kid off the field and in Tom Coughlins doghouse, where he has been before. Wilson has talent for sure… but until he starts producing he is merely a high upside flex play. Russell has had a couple mediocre games, to be fair he’s played 2 good defensive units, but Campbell didn’t draft this QB to average 13 points a game. The good news is this team still has AP who is going to continue to be the most reliable back in the game, and Demaryius Thomas is going to blow up a lot this year. Dwayne Bowe and Mike Wallace are essentially the same player… both have the size and talent to dominate, but have somewhat shaky QB play (for fantasy) and both disappear way too often for my liking 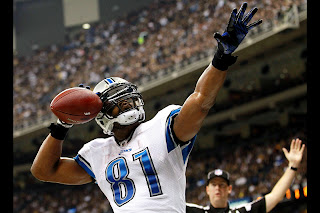 Abe invested a lot (2nd round pick) in Eddie Lacy and he unfortunately went down with an injury on his first carry of the game this past week. I expect him to be out for a few contests, so it was wise that Abe put in and won his waiver claim for back up James Starks. Gio Bernard looked great on Monday Night Football, if he emerges as the lead back in Cincy he could provide some real value moving forward. This team isn’t awful by any means- when you are led by Calvin Johnson and Larry Fitz you CANT be- but its hard to get too excited about this lineup. Joique Bell was a great pick by Abe… he holds value on his own and Kilmers black workhorse- Reggie Bush- is almost guaranteed to get injured and miss time soon. RG3 looks to be a normal human in 2013, theres basically no chance he lives up to his draft spot and produces anything close to 2012 numbers. His teammates say he is slower, they aren’t running the read-option cuz the skins keep getting blown out, and the rushing yards aren’t there. 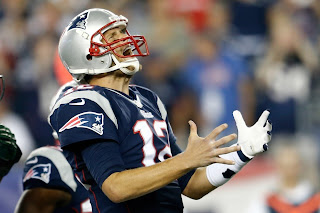 0-2 record + lowest points in the league + multiple injuries = last place in my power ranks. I almost, ALMOST feel bad for Don right now. Danny Amendola dominated week 1 but very predictably got hurt and will be out for at least 2 more weeks and maybe as many as 6 more. On top of that, Steven Jackson is now lost for at least week 3 after exiting early in week 2. Combine these injuries with Tom Brady’s struggles and you have a major problem on your hand. Both Alfred Morris and Tony Gonzalez are underperforming, but there’s no major concern with either IMO. Donny has the weekly challenge of picking the right WR to start… his rotation of TY Hilton, Marlon Brown, Andre Roberts, Emmanual Sanders and now Eddie Royal is not something any fantasy player wants to deal with so early in the season. There are sure to be better days ahead, but unless something major happens, I’m not optimistic about this team at all.