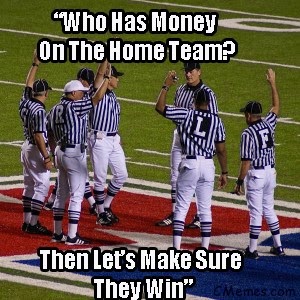 Wow. Pats just got jobbed again. On MNF. As non-biasedly as possible, here's what happened:


Brady drops back, side steps pressure, delivers a ball intended for Gronk that is intercepted about 6 yards into the end zone.

Flag comes in by the official standing a few feet away from the play. Pass Interference on Kuechly. Clearly the defender wasn't looking for the ball (face guarding, penalty) as Kuechly was literally hugging Gronk. He is directly in between Gronk and the ball.

Another official comes in and says the ball was uncatchable. That it was thrown too short for Gronk (6' 6") to possibly come back and catch the ball.

Flag picked up. Game over.

HOW CAN YOU COMPETE FOR THE BALL WHEN YOUR BEING INTERERED FROM DOING SO??????


Game over. Such a bad call. Jobbed again.

And heres what the masses have to say:

Video of Gronk struggling to answer whether or not he thought he was held on the last play. laugh out loud stuff here-


My thoughts..Since the flag was thrown they should have stayed with the call. There was clear contact before the ball was intercepted. More.
— Mike Pereira (@MikePereira) November 19, 2013


You could make a case that the pass might have been uncatachable, but the flag was thrown and you should stay with it. My thoughts
— Mike Pereira (@MikePereira) November 19, 2013


Every officiating expert so far says they blew the call. Except the one that's on tv. Another quality hire by ESPN. #worldwideleader
— Johnston & Flynn (@RJFlynn985) November 19, 2013


"Gronk can't compete for the ball. How do you pick that up and run off the field?" - Steve Young on controversial final call
— SportsCenter (@SportsCenter) November 19, 2013


Maybe not a PI on Kuechly, but it sure as hell was illegal contact, a hold, SOMETHING.
— Jon Wallach (@KenGriffeyRules) November 19, 2013


The pass was catchable..not illegal contact since ball was in the air...contact on 87 occurs prior to interception. It's a foul and called!
— Jim Daopoulos (@RefereeJimD) November 19, 2013


utter horseshit. bare minimum its holding. but it's really P.I. and its unconscionable that there was no official explanation by that crew.
— Gresh (Tweets) & Zo (@GreshandZo) November 19, 2013


Gruden is BS about that call/non-call. I think Brady just called the ref a Garbage Ass.
— Toucher and Rich (@Toucherandrich) November 19, 2013


I'm sorry - but if you are a boston media member and you agree with the flag being picked up - you are trolling. Plain and simple.
— Matt Perrault (@sportstalkmatt) November 19, 2013