Anyone not under a rock knows the Pats somehow lost to the Jets yesterday in New Jersey. In OT, the Jets set up to attempt a career long 56 yard field goal for Nick Folk, which would have won the game. First, this was a stupid call by Rex Ryan. If I'm the coach I punt the ball and play the field position game. You don't want to give the ball to Brady if he only needs 20 yards to set up a FG.

Anyway, Folk of course missed that 56 yard attempt. Wasn't even close. And then this happened: 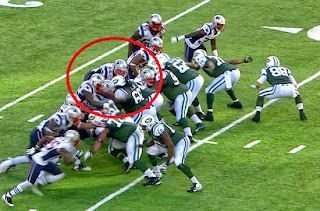 Pats #94 Chris Jones (who actually had a nice game up to this point) was flagged for a 15 yard personal foul for pushing his own player into the "pile" on this 56 yard FG attempt.

Everyone was confused when this happen. The TV guys said they have never seen a call like this in 15 years. After a ton of confusion it was realized that Jones was being called for the penalty under a new rule that started this year. The rule is in place for the protection of the players.

After about the 63rd replay you could KIND OF see Jones leaning into his teammate. His arms weren't fully extended but he definitely pushed the momentum forward.

So Jones was flagged, the Jets got the automatic first down, and after a couple more plays Folk buried the game winning 42 yarder.


Was it a penalty? I guess so. I'm not even really ready to say "Yes it was for sure a violation of the rule" but the ref was standing right there and seemingly staring directly at the violation. (kinda seemed like he was looking to make that exact call, no?)

There have been over 400 XP's and FG's attempted this year. This rule has never been enforced. Not once. This Pats-Jets game was the first time the called was ever made. On a game deciding FG.  Are you kidding me? Does anyone here really believe this is the first time all year anyone has violated the rule? C'mon now. That's a joke. Complete and utter joke.

This "infraction" didn't effect the play at all. It didn't give the Pats any advantage during the play whatsoever.If it had, I can certainly see justification for the flag.  BUT that wasn't the case. Folk would have badly missed that FG even with Jones off the field.

Here's where my experience and an on-ice hockey official kicks in. First let me say this. Anyone that ever says "A penalty is a penalty no matter when it is in the game" has no idea how to officiate or control a game whatsoever. Sometimes a trip in the first period is called, but the exact same play in the 3rd or OT wouldn't be penalized. Pretty basic stuff for any knowledgeable sports fan. And for the record, I learned this at an elite ref camp in LA that is run by NHL officials. So it's legit.

To bring it back to the Pats-Jets... I think you see my point... even if Jones was in violation of the rule by the letter of the law, the refs truly should have let this go. I GUARANTEE that NFL refs let more go when more is on the line. For example, a ref is going to allow slightly more contact on deep passes later in the game. Or, in a playoff game, they will allow a lot more contact at the line than normal. Kinda goes along with the  "Let them play"  mentality. You DON'T make a shady game deciding call on a new rule that's never been enforced before. It's wrong.


Bert Breer just tweeted out that the refs were told to watch for a push by the NE field goal blocking unit.

This adds a new element to my opinion on this matter. I am going to assume that the reffing crew or Umpire or somebody who "was told to watch for the push" had relayed this info to the Patriots. In that case, the Patriots and/or Chris Jones are really, really dumb for doing something they knew the refs would be looking for. They deserve to lose from stupidity alone.

As a referee, you're job isn't just to call penalties but to prevent them where possible as well. If the refs knew the Pats player may be pushing, they really should have told Belichick or a captain on the Pats to make sure they didnt push. That's what all refs do. They do what they can to prevent penalties and call them if necessary.

If the refs DIDN'T tell the Pats to make sure they didn't push at the line, then shame on them for this whole thing. The refs failed miserably if this is the case. They allowed a penalty to decide the game when it could have been prevented. 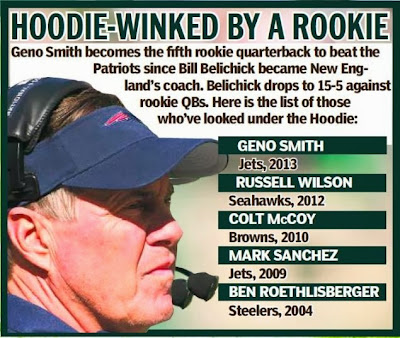