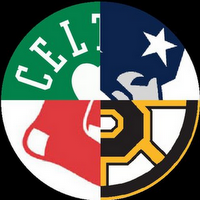 
1. The Bruins are Incredible

I made a joke comment about the Bruins going undefeated on Facebook.... obviously they cant do that but wow this team looks amazing through 2 games.

-Torrey Krug is emerging as a one of the best offensive defenseman in the league. Through 20 NHL games Krug has 5 goals and 3 assists and his presence on the point during the PP is unmeasurable. Like I said in my season preview, if the Bruins can afford to keep Chara down low in front of the goalie, this PP can dominate.

-Jordan Caron looks like hes not going to let his "last chance with the Bruins" go to waste. While Soderberg has been out due to injury, Caron has capitalized. He buried a really nice pass from Reilly Smith the other night and had a really nice goal that wasn't allowed in the first game. THIS is the reason why the Bruins have hung on to Caron for so long.

-Tuukka has stopped 57/59 shots with a couple highlight-reel saves in there. No one will be surprised if Rask turns in a Vezina-worthy performance this year.

If you are looking for more in-depth Bruins stuff go to this site. It is updated far more often than my website and the guys over at The Spoked Blog know what they are talking about. 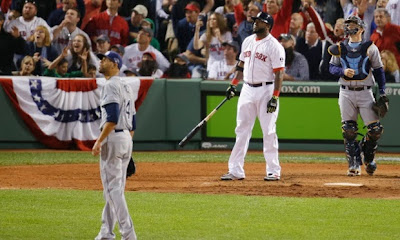 2. The Red Sox are also incredible and I suck for predicting them to lose

I predicted the Sox to lose to the Rays in the ALDS but that's not going to happen. The Sox crushed the Rays on Friday and then on Saturday night David Ortiz blasted 2 HRs en route to another win over David Price.

-I brought this idea up last Summer. If David Ortiz leads the Red Sox to another World Series victory, he HAS to be considered one of the best Red Sox players of all time. I'm talking like, Ted Williams status.

-It is AWESOME to have playoff baseball back in Boston. I was at Howl at the Moon on Saturday night.... when Papi hit that 2nd HR the place went CRAZY!!!! I haven't seen a reaction like for a baseball play in at least 5 years.


-In case you missed it, David Price freaked out after the game saying he was upset Ortiz took an extra few seconds at the plate on his 2nd HR. Price is a clown for being upset... Ortiz was standing there to make sure the ball was fair, not to show up Price (as you can see in the video above.)  After the game Price then got in a Twitter fight with fans and felt the need to list his accomplishments....Petty shit for Price here after what could be his last game as a Ray.

-Also, an interesting stat I found out that entering this game David Price was the best left-handed pitcher in Fenway Park history. How wild is that???? 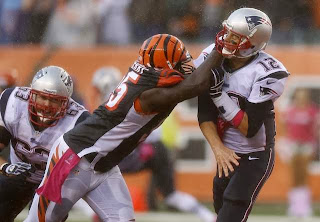 Pats only managed 6 points vs Cincinnati yesterday, which in the first time the didn't score a TD in like 20+ years. Brady's TD tossing streak ends at like 50 games or something like that... 2nd all time to Drew Brees. (I hate to say, Brees got SO MUCH PUB when he was on his streak. I've barely heard any for Brady)

-Even though the offense sucked, the defense kicked ass again. HUGE turnover by Mayo at the end gave us a chance to win the game. BIG test next week vs Brees and the Saints.

-Aqib Talib is like, a top 5 or 6 corner in the league. Completely shut down AJ Green this week. Pretty sweet to FINALLY have a reliable corner. It will be interesting to see what kind of offer the Pats will make him after this season. He's probably the early favorite for the franchise tag even though I think he has been vocal about not wanting that.

-Amendola came back but wasn't completely healthy, this offense is desperate for the return of Gronk, hopefully next week. The undefeated Saints are coming to Foxboro and they actually know how to play defense now so it is going to be a really good game.