BBBBBBruins are back! 2013 prediction here The Bruins 2013-14 campaign kicks off tonight vs. the Lightning and I am DAMN excited for the season to start. Last year we were robbed of hockey in the Fall due to the lockout, but this year we have a full 82 game schedule to look forward to.

In the Summer I went over in detail how our two new featured acquisitions will be used and what type of impact they will have.  Jarome Iginla is starting a season outside of Calgary for the first time ever, and playing with Lucic and Krejci has to be exciting for him. Loui Ericksson is slotted to play w/ Mr. Bruin, Patrice Bergeron, and Brad Marchand.

Briefly, here are the main things I am looking for this season:

-Improved PP. Obviously this has been the Bruins Achille’s heel for a long time now, since the departure of Marc Savard, but FINALLY it looks like the Bruins PP may actually be an asset this year. Iginla has looked great on the PP unit this pre-season, and with the addition of the young D men the possibilities are endless. Having their shots on the point free up Chara to finally be able to stand in front of the net during the man advantage. I’m a big proponent of this… Chara in front of the net is an enormous distraction for the opposing team and goalie. He can’t be moved. 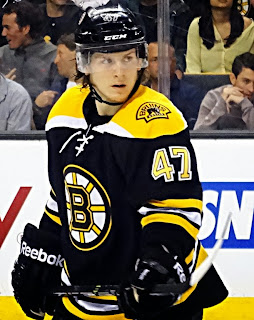 -Young D men. Bartkowski and Krug look to continue on the success they had in the playoffs last year, while Hamilton looks to take his game to the bnext level. All 3 of these guys made the team but it seems like each night one of them will be forced to sit. Hopefully 1 if not 2 of these guys emerge as “must-starts.” Quality D man depth is a good problem to have

-Tuukka Rask. The guy has pretty much proven all the doubters wrong… now I want to see him win a Vezina. He certainly has a shot if he stays healthy. I don’t think just because he got paid he is less focused.

-Absence of Seguin and Horton- I really don’t think the Bruins will miss Seguin’s speed or anything else about his game,  really. They aren’t the type of team that features skilled players like Seguin. The only area I feel like the Bruins will miss him is in the shoot out. For Horton, we will certainly miss his big time goals. I'm not too worried about his production being replaced... but it does suck not having this guy on the team.

-3rd line. The 3rd line last year sucked all year. Even going into the playoffs no one really knew who was going to be playing. It looks like Chris Kelly will be centering Carl Soderberg and Reilly Smith.

Who IS Reilly Smith you ask?

He’s a second year pro we acquired from Dallas last year. Here is what Claude Julien says about him:

““He’s very smart,” Chiarelli said. “He makes good plays in small spaces. He’s got a real good shot. For me, I’m still evaluating. I haven’t seen a lot of him. I saw him a couple times in college. I didn’t see him live in Dallas. Our guys scouted Dallas quite closely last year. Very good stick on the wrong side. He picks pucks very well. Very good on the wall. He’s not the biggest guy, but I think he plays with an edge. He’s got a lot of the things we like.”” 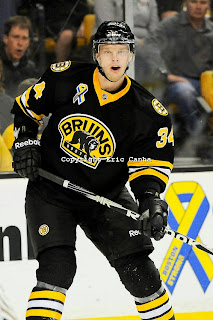 And we all know who Carl Soderberg is. The one eyed Swede. A gifted scorer that has been playing in across seas for years. He had a cup of coffee with the Bruins in the playoffs but ultimately his style of play is too risky to deal with in the playoffs. I’d bet Soderberg ends up with 15-20 goals on the 3rd line this year, which the Bruins would have to be happy about.

-David Krejci got awarded the “A” to split with Kelly this year… A classic case of someone who leads by example on the ice. He’s quiet but dedicated and it would be wise for our younger guys to watch this guy work. Well deserved.

My official prediction is that the Bruins win the Cup this year. I don’t see any team knocking them off within the Conference (keep in mind the Red Wings are our rivals now) and frankly I think this year’s squad is more talented than last years. Combine that with one more year of deep playoff experience for all the guys on the team and it adds up to a Stanley Cup parade if you ask me.

Enjoy the season everyone. It could be one to remember for a long time. 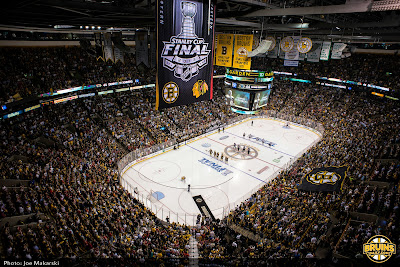