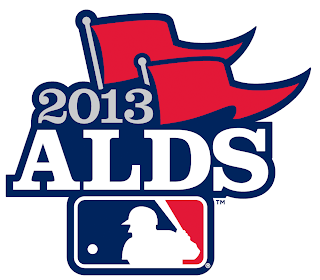 The Indians lost to the Rays in the AL Wildcard game last night which means the Sox and Tampa will kick off a 5 game series tomorrow night in Fenway.

This is the first time the Sox have made the playoffs since 2010, where they were swept away by the Angels

The last Sox playoff win was in the ALCS on October 18, 2008 vs the Rays. That was 1,811 days ago. To put that in perspective for people who know me well... I stated dating Ms. NWOTB about a month after that game.

The Rays eliminated the Sox in 2008 in Game 7 of the ALCS. Jon Lester started the game for the Sox that night. David Price was a rookie and earned the save. He struck out JD Drew in the bottom of the 8th with the bases loaded to essentially end the game.

This year the Rays received dominating pitching from Price, Alex Cobb, and Matt Moore. Jeremy Hellickson is also a quality pitcher that can eat up innings for the Rays

Here's how America thinks the series will go: 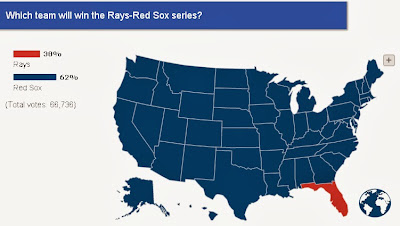 Here are the current Vegas odds to win the World Series:

My honest gut feeling is that the Sox lose to the Rays. The Rays are dangerous, have better starting pitching, and just seem to have the Sox number over the past few years or so.  The Red Sox have obviously had a nice season- no one expected them to be a playoff team- but the magic will end vs the Rays.

Tigers over Dodgers in the World Series. 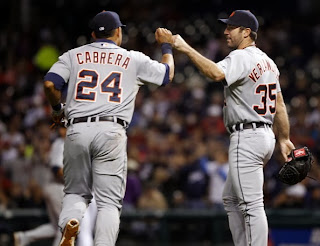 The Tigers are too good. They have the best lineup, tons of experience, a great starting rotation, and a fairly deep bullpen. They got swept out of the World Series last year but I think they ca go the distance this time around. I'm rooting for the Sox first, the Pirates second, and after that I could care less.

Also, Here are all the World Series Winners and Losers since I started really caring about and understaing sports. Around age 9. (click the picture to zoom in) 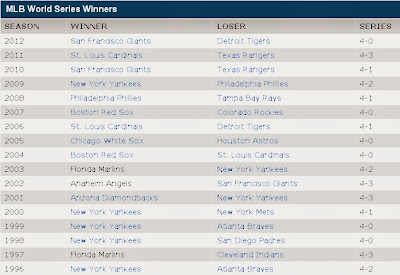